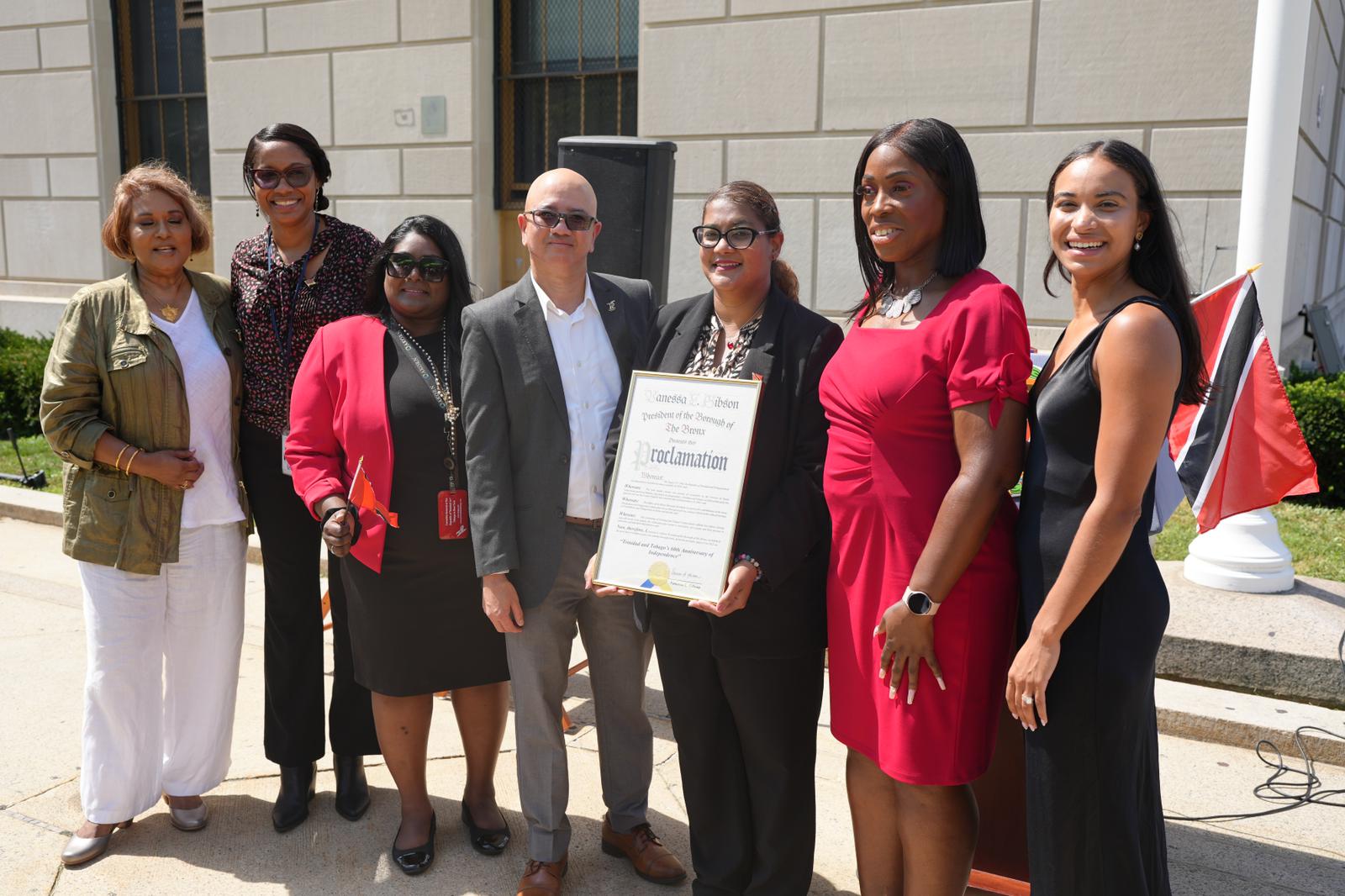 (Bronx, NY) Bronx Borough President Gibson joined the Consul of the Republic of Trinidad and Tobago, Mary Tang Yew, and Community Activist Hazra Ali who served as Mistress of Ceremonies, outside Bronx Borough Hall for a flag-raising ceremony to commemorate 60 years of the twin-island country’s independence from British rule. The nation, situated off the northern edge of the South American mainland and roughly 7 miles from Venezuela, has a population of 1.5 million. Today, according to the latest U.S. Census, close to 308,000 reside in the United States with the majority, living in New York State.

“As the daughter of a proud Trinidadian man, I share this rich heritage with thousands of others across this city who in this inaugural celebration can join us to recognize the culture, heritage, food, and countless contributions made each day by those who hail from Trinidad and Tobago across this city and our borough,” said Bronx Borough President Vanessa L. Gibson.

“I commend Bronx Borough President Vanessa L. Gibson and her staff for putting together an event to acknowledge and celebrate the 60th Anniversary of Trinidad and Tobago, and just as the Borough President said, I too look forward to many more celebrations to come,” said Community Activist and Mistress of Ceremonies, Hazra Ali.

Consul of the Republic of Trinidad and Tobago, Mary Tang Yew who represented the Consul General of Trinidad, Mr. J. Andre Laveau said, “The Consul General acknowledges that having come from the throes of a pandemic we must reflect on ways to turn adversity in to a shared purpose. Indeed, we are thankful and thriving and we must always continue to celebrate our triumphs, even despite these challenges, as together we aspire, together we achieve. And in this vein, we are Together 60!”

During the ceremony, entertainment was provided by Artist Ricardo Jerome who performed the National Anthem for Trinidad and Tobago, Professional Dancer, Abha Roy from the Srijan Dance Center and Vocalist Diane Arroya who sang the National Anthem of the United States of America.