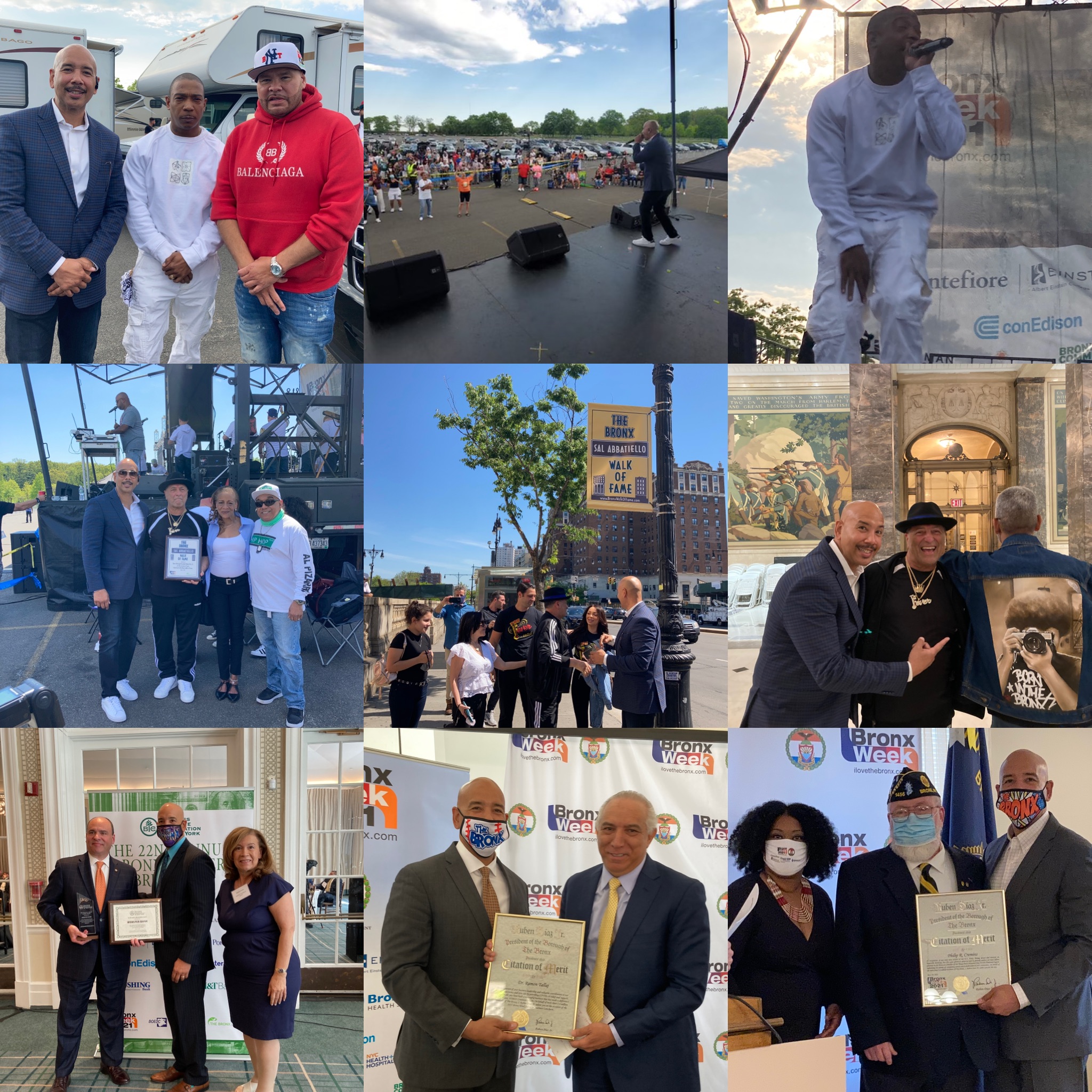 On Saturday, May 15, 2021, Bronx Borough President Ruben Diaz Jr. and The Bronx Tourism Council co-hosted the grand finale of Bronx Week 2021. The day’s events included an induction ceremony for this year’s Bronx Walk of Fame honorees on the Grand Concourse followed by a Grand Finale Concert at Orchard Beach. This year’s tourism award was presented to Woodlawn Cemetery.

The 2021 Bronx Walk of Fame inductees include renowned Hip Hop Photographer and Activist Joe Conzo, Jr., Founder and CEO of Fever Records Sal Abbatiello and Grammy Award Winning DJ and Producer Kid Capri. During the ceremony, which took place on the Grand Concourse in front of The Bronx County Building, each honoree had their ceremonial street sign installed on the Bronx Walk of Fame.

“In my final Bronx Week as Borough President, it was once again my pleasure to celebrate with proud Bronxites the wonderful things that our borough has to offer,” said Bronx Borough President Ruben Diaz Jr. “Bronx Week is a time to celebrate and embrace our Bronx roots. Despite the pandemic, over the past week, we proudly showed the world that our borough is a great place to live, work, raise a family and have a good time, and we will come back stronger than ever.”

“Bronx Week was a little different this year, but we are delighted we had the opportunity to celebrate our great people and institutions because The Bronx deserves to be celebrated,” said Olga Luz Tirado, executive director of The Bronx Tourism Council.

About this year’s Walk of Fame inductees:

Salvatore Abbatiello, Founder and CEO of Fever Records, is a Bronx born and raised entrepreneur, and has been a business owner since 1971. He has over 46 years of experience owning over 15 night clubs, restaurants and lounges, employing numerous residents. He encompasses all areas of the music industry including his own record label, artist management, publishing and concert promotions. His dedication to the Bronx community has been the focal point of his life and he continues to contribute to community charity and fundraiser events. His story about Disco Fever can been seen in the movie Krush Groove released in 1985. In 1999 the Rock and Roll Hall of Fame invited Sal Abbatiello to participate in its first ever national Hip-Hop Conference, and solicited key Disco Fever memorabilia for the museum’s permanent collection. It seems that the Disco Fever legend is destined to live on into the 21st Century. This CD sampler represents just a portion of the Fever legacy as it lives on in the hearts and minds of the many people who experienced it.

Sal has provided a number of artists with opportunities to showcase their talents at the Disco Fever, leading them to bigger platforms in the music industry moving on to receiving Grammy awards for their contribution to the music culture. Sal continues to work tirelessly for the Bronx community by providing employment to many residents at his establishments and concert venues. His dedication has proven his outstanding efforts and exceptional devotion to the community.

Joe Conzo, Jr. was born and raised in the Bronx, and he was born into Bronx Royalty. His Grandmother, Dra. Evelina Antonetty, affectionately known as “The Hell Lady of The Bronx” is credited with starting Bilingual education in The Bronx and advocating for basic human rights for Bronx natives and people of color. His mother, the late Lorraine Montenegro is credited with starting the first Women with Children facility in the country to combat their demons with substance abuse. Joe Conzo Sr. is considered the foremost Latin Music Historian in the country and teaches at Hostos Community College. Serving 5 years in The Army as a combat medic, Joe found a career as an EMT and Union activist in The NYC Fire Dept. Retiring in 2018 after 25 years with FDNY, Joe was a staunch advocate for his members who responded to the 9/11 tragedy in helping set up the 9/11 health registry, which would lead to the WTC Zadroga Bill.

Joe acquired a passion for photography as a young boy attending the Agnes Russell School on the campus of Columbia University. He continued his formal artistic education at the School of Visual Arts (NYC). The New York Times, heralded Joe Conzo Jr. as “The Man Who Took Hip-Hop’s Baby Pictures.” The long and perilous journey of his photographic images had finally captured the gaze of mainstream America.

All the while, he continued his photography and published a seminal book on hip hop culture that has received worldwide recognition, Born in The Bronx: A Visual Record of the Early Days of Hip Hop” (2007). In 2019, Joe published his second book, 111 Places in Da Bronx you must not miss, showcasing The Bronx’s historical contributions to The World.

Retired now for 3 years from public service, Joe continues his photographic career, documenting events all over the world and fighting for the basic human rights for the people in The Bronx. Joe has been married for 22 years with 2 children and 3 grandchildren.

KID CAPRI, Grammy Award Winning DJ and Producer, is globally known as an originator, innovator, and pioneer of DJ Culture. KID’s humble roots can be traced back to his parent’s home in the Bronx, where ten year old David Anthony Love would scratch records on his father’s old Zenith stereo system. As soon as he was old enough, he hit the pavement and caught a buzz hustling his DJ mixtapes on the streets and performing local gigs. His grass roots hustler mentality became a template for success emulated by the DJs that followed in his footsteps. Dubbed The Guru of Mixtapes, KID CAPRI literally redefined the term “DJ” as he blazed a trail with his array of fire mixtapes and lit crowd hyping performances. “A true master is somebody that makes other people want to do what they do.” – KID CAPRI. KID CAPRI was the first DJ to perform on major networks like BET and VH1. He starred in the popular HBO series Russel Simmons DEF Comedy Jam and recently returned for The Netflix DEF Comedy Jam’s 25TH Anniversary Special. He was the lead judge on VH1’s Master of the Mix DJ Competition show. KID has produced tracks for Snoop Dogg, Jay-Z, Madonna, Heavy D, and 50 Cent to name a few. He has years of touring experience with legends like Diddy, Jay Z, Aaliyah, Salt-N Peppa, Timbaland, and most recently RBRM. KID won a Grammy for producing a song on Jay-Z’s classic album, Hard Knock Life. In 2018 KID narrated Kendrick Lamar’s DAMN album; the only hip hop album to ever win a Pulitzer Prize. KID premiered his signature crowd hyping vocals at Jennifer Lopez’s ALL I HAVE Las Vegas Residency during the magical portion of her show dedicated to The Bronx.

Bronx Week is the annual celebration of everything that makes The Bronx a great place to live, work and raise a family. Bronx Week is made possible with the generous support of Gold Sponsors Montefiore Medical Center, Empire BlueCross BlueShield and BronxCare Health System.