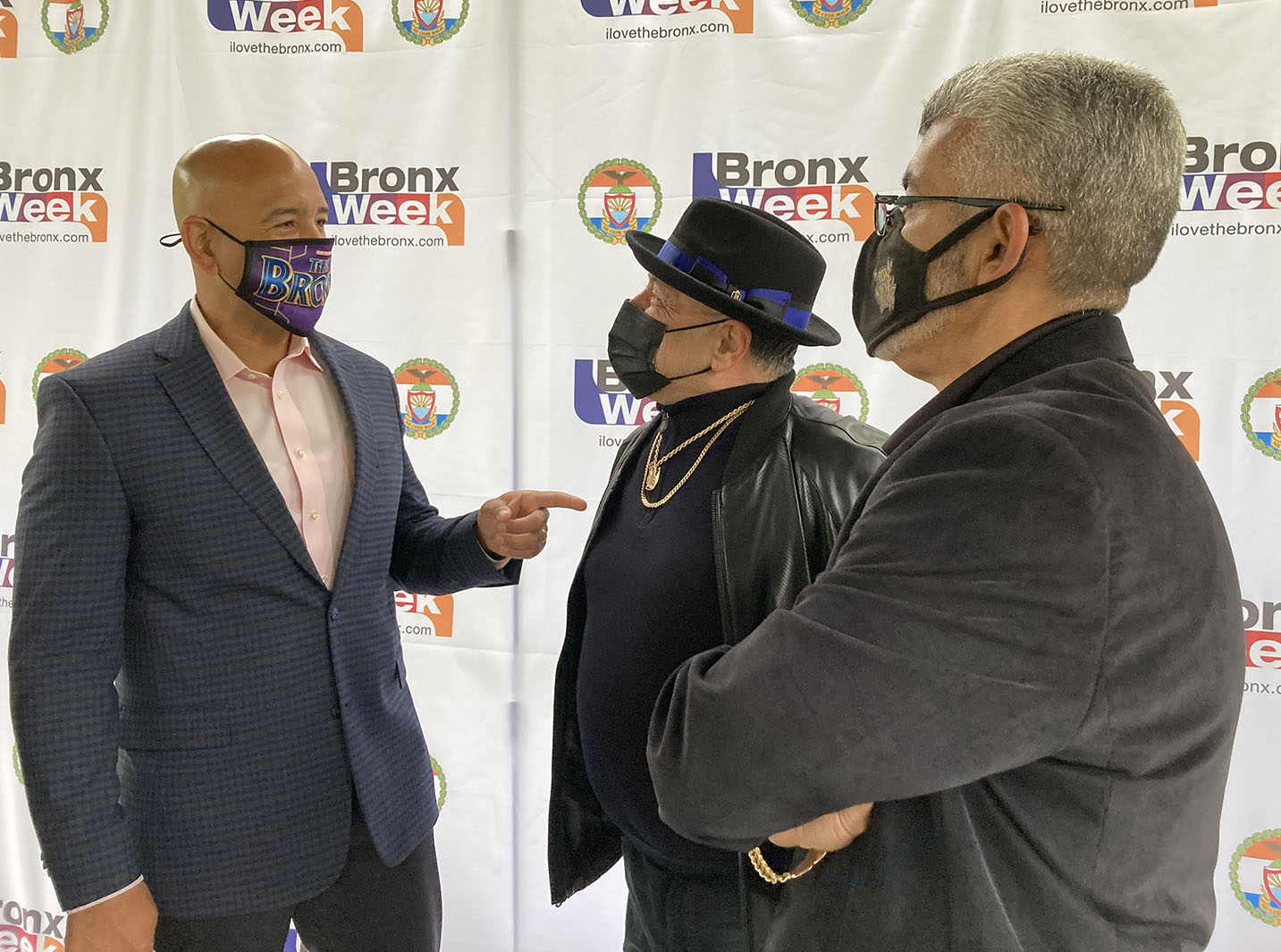 Bronx Borough President Ruben Diaz Jr. was joined by Deputy Borough President Marricka Scott-McFadden, sponsors and elected officials today for the official kick-off of “Bronx Week 2021,” his final Bronx Week serving as Borough President, at The New York Botanical Gardens. During the kick-off, Borough President Diaz announced that Joe Conzo, Jr., Sal Abbatiello and Kid Capri would be honored as the newest members of the Bronx Walk of Fame. The Tourism Award will be presented to Woodlawn Cemetery by The Bronx Tourism Council.

“Bronx Week is a chance for our borough to celebrate what an incredible community we have here. In my final year as Bronx Borough President, I am thrilled that despite the COVID-19 pandemic, we are able to come together in a safe way to celebrate the people who are proud to call The Bronx their home,” said Bronx Borough President Ruben Diaz Jr. “The Bronx is recognized by the whole world as a rainbow of culture, talent, and spirit and this year’s honorees represent just that. We have three amazing honorees that have never stopped representing the borough through art, music, activism and philanthropy, and I am thrilled to join the people of The Bronx in congratulating them on this tremendous honor.”

“Bronx Week is a little different this year, but we are delighted to celebrate in whichever way we can because The Bronx deserves to be celebrated,” said Olga Luz Tirado, executive director of The Bronx Tourism Council.

For more information about Bronx Week and the 2021 events, visit: www.ilovethebronx.com

The 2021 Bronx Walk of Fame Inductees are:

Now in its 49th year, Bronx Week is the annual celebration of everything that makes The Bronx a great place to live, work and raise a family. Bronx Week is made possible with the generous support of Gold Sponsors Montefiore Medical Center, Empire BlueCross BlueShield and BronxCare Health System.

Montefiore Medical Center is the largest employer in The Bronx and has partnered with the Office of the Bronx Borough President on a multitude of community outreach projects. Montefiore serves a unique and diverse population, and has been providing care to The Bronx community for over 100 years.

“Last year, our country watched the Bronx become the epicenter of the first wave of COVID-19 in the United States. Today, they see that the Bronx is one of the strongest and most resilient communities there is. With pride, we celebrate our long history as the main sponsor of Bronx Week and events like Health Day, our COVID Day of Remembrance and the Bronx Food and Farm Tour, which recognize our frontline workers, and aim to enhance the health of our borough. We also get to acknowledge new members of the Bronx Walk of Fame. Lastly, we pay homage to our fearless leader, Borough President Diaz, whose positive impact on our business, culture and people will be felt for many years to come,” said Marcos Crespo, SVP of Community Affairs.

Serving New Yorkers for more than 85 years, Empire BlueCross BlueShield (Empire) is on a mission to materially and measurably improve the health of New Yorkers. Empire is the largest health insurer in New York supporting more than four million members and more than 38,000 business, union and small employers in New York.

“Today, the Bronx ranks 62 out of New York’s 62 counties for health outcomes and as part of our mission to improve the health of New Yorkers, we want to support our communities to change this,” said Alan J. Murray, president & CEO, Empire BlueCross BlueShield. “In February, we announced a new partnership with Montefiore to deliver several health-focused community outreach initiatives, and Bronx Week is the perfect time to host our first event together. Please join us at our Health Day Fair on Saturday, May 8, 2021 from 1-4 p.m. in Westchester Square.”

BronxCare is the largest voluntary, not-for-profit health and teaching hospital system serving the South and Central Bronx, with 859 beds and more than 4,500 employees. Its two main hospital divisions, comprehensive psychiatric and chemical dependency programs, long-term care facility, and extensive outpatient network are delivering the highest quality and accessible services to the community.