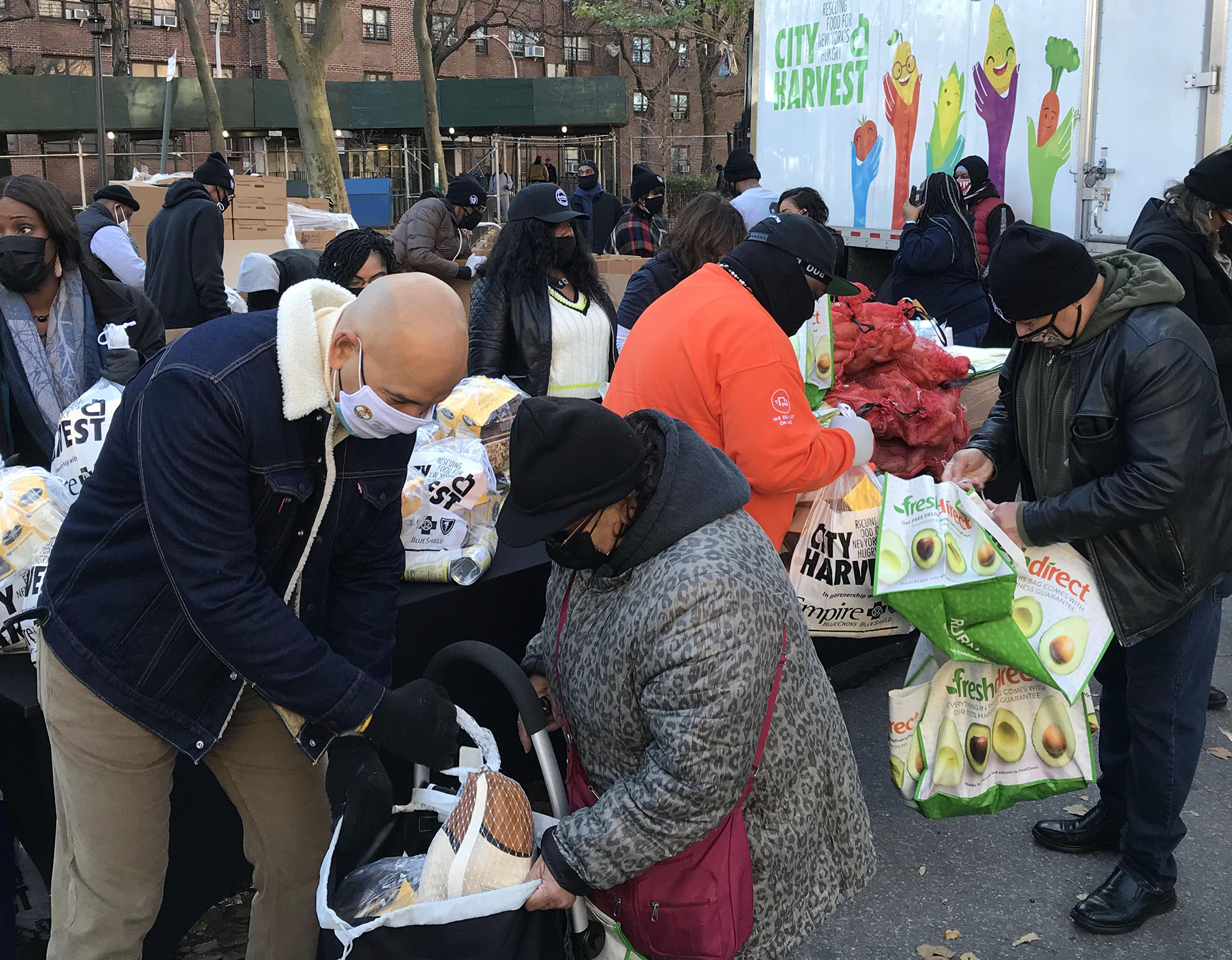 “One thing this pandemic has done is highlight the importance of partnerships between the private and public sector,” said Bronx Borough President Ruben Diaz Jr. “FreshDirect is a shining example of how private entities have stepped up big time for The Bronx in these trying times, not only working with elected officials to make sure our neediest communities get access to much-need groceries but also making sure our pantries are fully stocked with items to feed our most vulnerable residents. I would like to thank all our partners who have helped to put this together.”

“As a food company headquartered in the Bronx, FreshDirect continues to be strongly committed to our neighbors in need. We are grateful to our partners whose generosity and support are making the start of the holiday season brighter for our community, especially during these difficult times,” said Larry Scott Blackmon, Vice President, Public Affairs, FreshDirect. “Food insecurity has reached new levels since the start of the pandemic, and now more than ever, it is important for the private and public sectors to unite and provide vital services and resources such as food and PPE to the most vulnerable populations.”

The various partner contributions include:

“As we continue to battle the COVID-19 epidemic, the need for emergency food is surging across New York City,” said Jilly Stephens, CEO of City Harvest, New York City’s first and largest food rescue organization. “City Harvest has rescued and delivered more than 72 million pounds of food since the start of the pandemic — a 63 percent increase over the same period last year. But the need is so high that lines at pantries and soup kitchens still stretch for blocks. The turkeys and other holiday food we are distributing today will help hundreds of New Yorkers have a truly Happy Thanksgiving.”

“It’s so imperative to understand how our community needs are changing and be willing to evolve and find creative solutions to support and empower people in these challenging times,” said Kyrie Irving, KAI Family Foundation. “With the holiday season, collaborating with the amazing partners of ‘Give-Ember’ gives us the opportunity to do just that in a safe, meaningful, and impactful way.”

“The entire Virtu family is honored to support City Harvest’s tremendous efforts to feed New Yorkers in need especially during the pandemic. We are excited for the opportunity to be on-site to help distribute some of the thousands of turkeys donated in coordination with City Harvest this holiday season,” added Doug Cifu, Chief Executive Officer, Virtu Financial.

“There is nothing more satisfying than wrapping our arms around the community in an effort to make change and put a smile on the community’s face during the holiday. And, more so, in my backyard and stomping grounds of The Bronx, with my fellow elected officials, and the great folks at FreshDirect and City Harvest,” stated Ricky “Slick Rick” Walters.

This is the sixth year that FreshDirect has hosted the annual Thanksgiving turkey donation event.

About FreshDirect:
FreshDirect is the Northeast’s leading online fresh food grocer, delivering directly to customers throughout seven states, including the New York City and Philadelphia metropolitan areas, and the District of Columbia. FreshDirect is committed to sourcing the freshest and best-tasting meat, fish, produce, and specialty items through direct relationships with suppliers, growers, and farmers. Launched in 2002, FreshDirect is a privately held company headquartered in The Bronx, NY. Wines and spirits are sold by FreshDirect Wines & Spirits, an independently owned store with NY State License #1277181. For more information, visit www.freshdirect.com.

About City Harvest:
City Harvest is New York’s first and largest food rescue organization, helping to feed millions of New Yorkers who struggle to put meals on their tables. This year, we will rescue 109 million pounds of fresh, nutritious food and deliver it—free of charge—to more than 400 food pantries, soup kitchens, community partners and our own Mobile Markets across the five boroughs. We work alongside our community partners to boost community capacity, expand nutrition education, and strengthen local food systems. For more than 35 years, City Harvest has always been there to feed our city—one day, one meal, one New Yorker at a time. To learn more, please visit cityharvest.org.

About KAI Family Foundation:
The K.A.I. Family Foundation (K.A.I.F.F.) was founded to help build self-sustaining communities and ensure families who are often overlooked feel heard, inspired, and powerful! Our founder, Kyrie Irving, saw the need for educational, water, and food security throughout communities like his family’s hometown in New Jersey, the Bronx, New York, and native Standing Rock Sioux Tribe in South Dakota and decided to be a part of the social change in these areas. K.A.I.F.F. believes all families should feel confident in their community and elevate the next generation. K.A.I.F.F. is designed to support and equip young people and communities with the resources they need to thrive.

About Virtu Financial:
Virtu is a leading provider of financial services and products that leverages cutting-edge technology to deliver liquidity to the global markets and innovative, transparent trading solutions to its clients. Leveraging its global market making expertise and infrastructure, Virtu provides a robust product suite including offerings in execution, liquidity sourcing, analytics and broker-neutral, multi-dealer platforms in workflow technology.

About Lineage Logistics:
Lineage is the world’s largest and most innovative provider of temperature-controlled logistics solutions. Lineage’s expertise in end-to-end logistical solutions, its unrivaled real estate network, and its use of technology combine to promote food safety, increase distribution efficiency, advance sustainability, lessen environmental impact, and minimize supply chain waste. As a result, Lineage helps customers ranging from Fortune 500 companies to small family-owned businesses increase the efficiency and protect the integrity of their temperature-controlled supply chain. In recognition of the company’s leading innovations, Lineage was recognized as the No 1. Data Science company on Fast Company’s Annual list of The World’s Most Innovative Companies in 2019, in addition to ranking 23rd overall in an evaluation of thousands of companies worldwide.

About Slick Rick Music Corp:
Lasting four decades, six presidencies, and countless trends, Slick Rick endures as “the most sampled hip-hop artist in history” with GRAMMY® Award nominations and numerous multiplatinum albums to his name. It’s why he remains synonymous with rap music, culture, and fashion. Not only does he remain a pillar of the hip-hop community, but he also is entwined with the local and global communities. He co-sponsored The Bronx Youth Empowerment Program’s Christmas Charity Event for three years and fought homelessness alongside politicians in New York and Florida. He participated in will.i.am’s “TRANS4M” concert, which benefited the “I.AM.ANGEL FOUNDATION” to the tune of $2.4 million. The Smithsonian National Museum of African American History and Culture paid homage to him with a popular exhibition, and he claimed a place on The Bronx Walk of Fame as well as a street named after him in The Bronx. He works tirelessly against youth incarceration and poverty and supports children’s literacy initiatives and the current Black Lives Matter protests and movements.

About Bronx Borough President Ruben Diaz Jr.:
Ruben Diaz Jr. first entered public office as a member of the New York State Assembly in 1997, and is currently serving his third full term as Bronx Borough President, having been reelected in November 2017 with more than 88 percent of the vote. Since taking office in 2009, Borough President Diaz has provided tens of millions in funding to projects of all types in every Bronx neighborhood, including new technology upgrades to borough schools, green roofs and boiler upgrades, park improvements and more. Prior to his current role, Borough President Diaz served seven terms in the State Legislature. In the State Assembly, Ruben Diaz Jr. served as Chair of the Committee on Election Law and on the Assembly’s Standing Committees on Education, Ways & Means, Children and Families, Environmental Conservation and Transportation. He was also a member of the Assembly’s Puerto Rican and Hispanic Task Force and the Black/Puerto Rican and Asian Legislative Caucus.