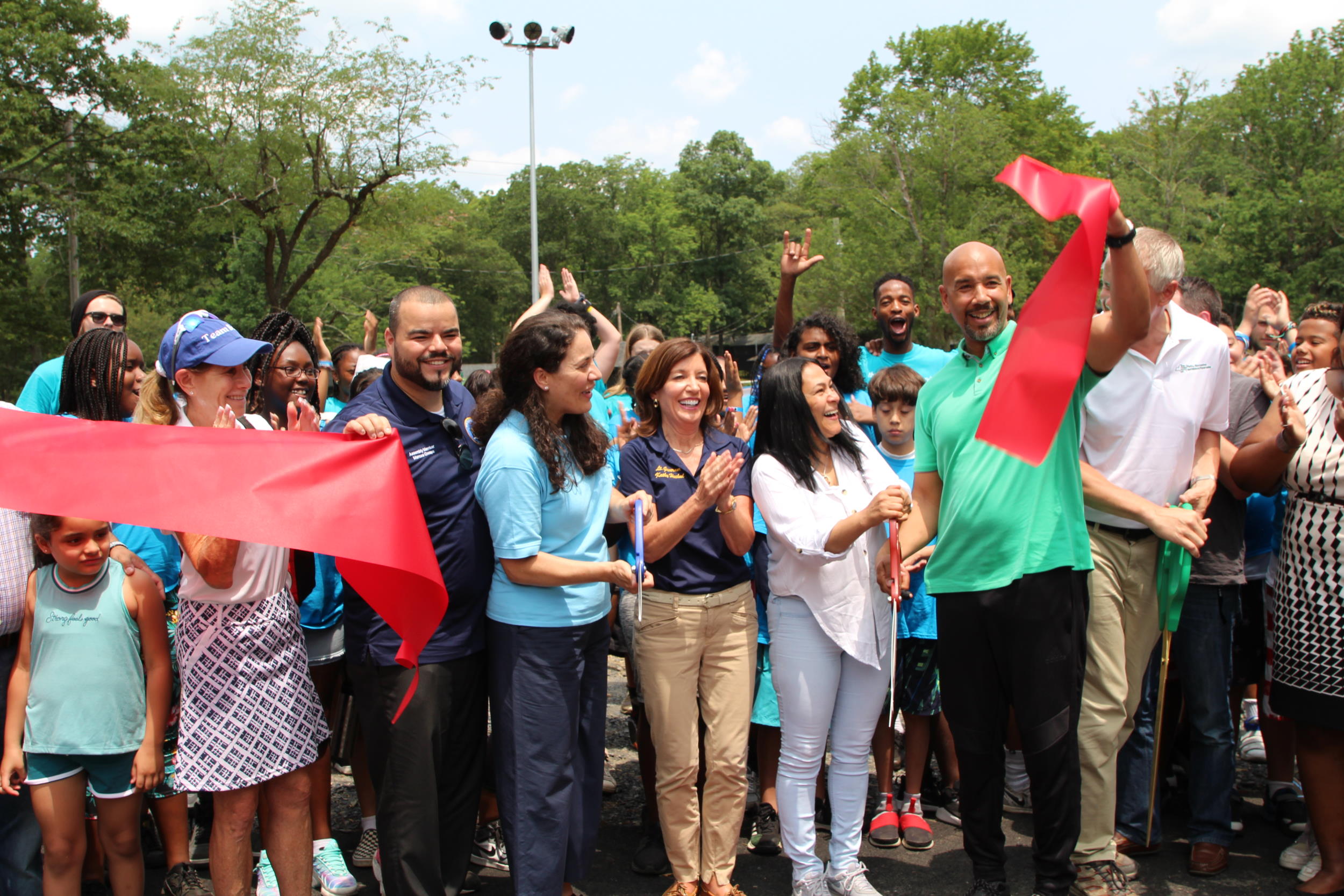 Governor Andrew M. Cuomo today announced the opening of Camp Junior, a summer camp for youth from targeted neighborhoods in the Bronx. The revitalized camp is named for 15-year-old Lesandro “Junior” Guzman-Feliz, who was killed by Bronx gang members in 2018 in a case of mistaken identity. New York State Parks established the camp in partnership with The Fresh Air Fund and Bronx leaders, investing $2 million over two years in Camp Junior to rehabilitate a deteriorated youth camp in Harriman State Park, a 47,500-acre wilderness park in Rockland and Orange Counties that is only 30 minutes from the Bronx. Bronx Borough President Ruben Diaz Jr. and Assembly Speaker Carl Heastie have helped to secure operating funds.

“The grisly murder of ‘Junior’ Guzman-Feliz was a senseless tragedy that shook the New York family to its core, and a reminder that we need to do more to address the causes and conditions that produce violence,” Governor Cuomo said. “Camp Junior is providing Bronx kids with a home away from home and teaching them skills to resist the temptation to join a gang in the first place.”

Bronx Borough President Ruben Diaz Jr. said, “I am honored to partner with so many of my colleagues on Camp Junior, and to provide this camp with $1 million from my latest capital budget. We want this camp to succeed and we are committed to making sure that it grows to be a long-term resource for Bronx children. By providing resources to ensure that Camp Junior is there for generations to come, we can help to make gang culture and violence a thing of the past,” said Bronx Borough President Ruben Diaz Jr. “Thank you to Junior’s parents, the Fresh Air Fund, Governor Cuomo and Lieutenant Governor Hochul, New York State Assembly Speaker Carl Heastie and the New York State Parks Department for your collaboration on this incredible program.”

“Today we remember Lesandro ‘Junior’ Guzman-Feliz, a victim of a senseless tragedy, and dedicate this campground in his memory,” said Lieutenant Governor Kathy Hochul, who spoke at today’s event. “We have a responsibility to Junior to protect Bronx youth. Camp Junior will promote positive behavior, social activities, and teach anti-gang skills to hundreds of young people to ensure future success, which will go a long way toward enhancing quality of life in the Bronx.”

“Every member of our community was touched by the tragedy that befell Lesandro ‘Junior’ Guzman Feliz last year. And if we learned one thing from this senseless act of violence it is that every child deserves a safe space to grow up,” Assembly Speaker Carl Heastie said. “Camp Junior will help change the lives of kids in the Bronx, giving them the tools they need to avoid gangs and violence, while getting the chance to explore our beautiful state parks. I am proud to have secured funding for Camp Junior, and will continue working to fund programs to help give kids in the Bronx and across the state a bright future. And although we will continue to mourn Junior, through Camp Junior we will remember him for years to come.”

Junior’s Mother Leandra Feliz said, “I feel incredibly happy for all the love and support my family has been receiving and seeing how the community has responded by further honoring my son. We need to take care of the future of our children and it’s amazing to see all of the kids who are going to have such an amazing opportunity and experience and at this camp.”

The project is part of Governor Cuomo’s 2019 Justice Agenda, which calls for expanding youth connections to State Parks, outdoor recreation and conservation to promote pro-social behavior and reduce conflict among young people. Part of the camp’s program includes anti-violence and anti-gang lessons aimed at offering young people alternatives to joining gangs. The camp is housed at the park’s Top of the Pines location on Lake Tiorati and is open to boys and girls ages 9 to 13. 175 children have already attended Camp Junior, with another 325 expected before the end of the season, and the camp will serve up to 1,000 additional children next year. The children are chosen by Fresh Air Fund officials from Bronx neighborhoods that are at risk for gang activity.

Inspired by Junior’s mother, Leandra Feliz, the camp’s goal is show young people alternatives to the violence found in their neighborhoods and to diminish future gang affiliations among the next generation.

Fatima Shama, Executive Director, The Fresh Air Fund, said, “Governor Andrew Cuomo responded to a call from the Bronx community, especially Junior’s parents, to provide a place for children to have new experiences and be exposed to new environments, broaden their horizons and experience ways to increase their confidence and skills. We want to thank Governor Cuomo for his leadership, along with New York State Parks, Speaker Carl Heastie, and Bronx Borough President Ruben Diaz Jr, for making Camp Junior possible.”

State Parks Commissioner Erik Kulleseid said, “The young people here today are the future of the Bronx. This camp will help them return home with a renewed sense that they can help make their community a better place.”

Last month, five gang members were convicted of murder for Guzman-Feliz’s death. Two other young men involved in the attack faced no charges after cooperating with police in the investigation.

Guzman-Feliz was killed after gang members mistook him for a member of a rival gang. The boy was not in a gang, but was a member of the New York City Police Department Explorers program, and had dreams of one day becoming a law enforcement officer

A 2017 study from the University of Illinois found that many of the reasons youth engage in gang activities are similar to those that motivate young people to engage in sports or other positive recreational activities.

Senator José M. Serrano said, “As Chair of the Senate Committee overseeing parks and recreation, I am thrilled that the youth of the Bronx now have this fantastic opportunity for outdoor play and nature conservation. Open air recreation improves physical and mental health, and encourages  independence, creativity, and positive social skills. Junior was taken from us far too soon, but his legacy will live on as Camp Junior exposes our children to new and exciting environments and broadens their horizons. Many thanks to Governor Cuomo, New York State Parks Commissioner Kulleseid, Bronx Borough President Diaz, Assembly Speaker Heastie, and the Fresh Air Fund for their commitment to improving the lives of Bronx youth through Camp Junior.”

Senator David Carlucci said, “There is nothing that can bring back ‘Junior’ Guzman-Feliz. We can though honor his legacy, his dream of becoming an NYPD officer, and his love for his family and friends. With Camp Junior at Harriman State Park, children can go to a safe and inviting camp where they’ll learn there is a different path forward. I thank Bronx leaders and the Governor for taking action to prevent youth gang violence and investing in our children’s future.”

Assembly Member Marcos A. Crespo said, “When we all come together with the main goal of creating opportunities for our children, accomplishments such as Camp Junior come to fruition.  Junior’s legacy will live on in the Bronx forever; a legacy that speaks to positivity and opportunity. I admire and thank Assembly Speaker Carl E. Heastie, Bronx Borough President Ruben Diaz Jr., Governor Andrew Cuomo and all others who selflessly came together to envision and construct Camp Junior.”

Assembly Member Karines Reyes said, “Lesandro “Junior” Guzmán-Feliz’s spirit of community and non-violence will live on through the hearts of the boys and girls of Camp Junior. His death has never and will never be in vain, thanks to The Fresh Air Fund, NYS Parks, Borough President Diaz, Jr., and of course, Junior’s courageous mother, Leandra.”

City Council Member Ritchie Torres said, “The tragic murder of Junior Guzman-Feliz impacted millions of lives, and made clear that gang violence does not happen in a vacuum. It is the result of the lack of resources and positive influences in the lives of youth. Camp Junior will serve as a place where young people can escape and be surrounded by activities and resources that will positively impact their lives, and deter them from gangs. I’m proud to support Camp Junior and the efforts to honor Junior’s life.”

The initiative builds on Governor Cuomo’s efforts to revitalize the nation’s first and oldest outdoor summer group camps at Harriman State Park. Originally constructed in 1913, these 37 outdoor group camp facilities were built to serve children from urban communities, but have fallen into disrepair following decades of neglect and inaction. Thanks to funding made available through Governor Cuomo’s NY Parks 2020 initiative, long overdue infrastructure and recreational improvements are being completed.

About The Fresh Air Fund