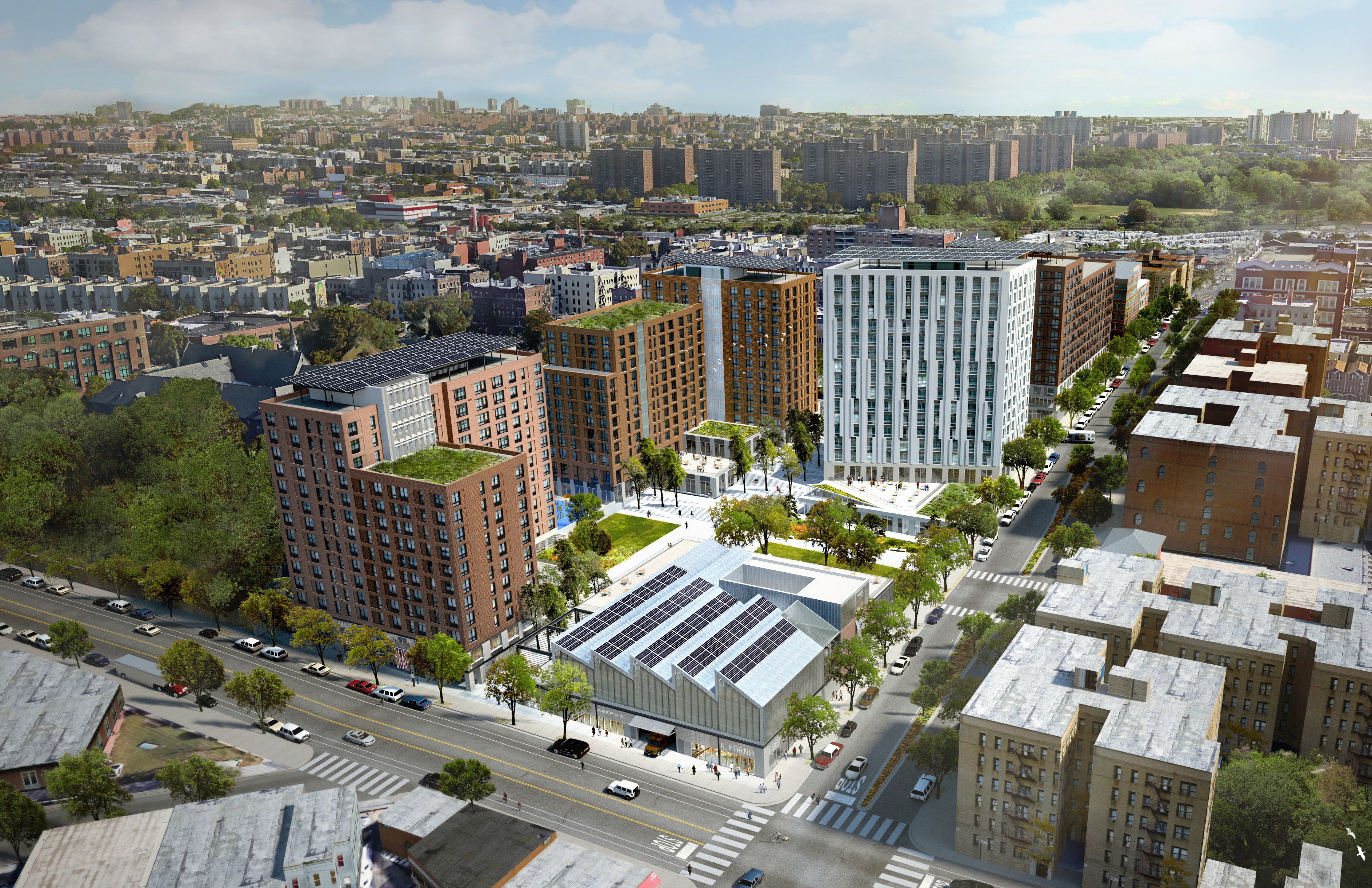 50,000 square foot Bronx-based project is part of The Peninsula, and will support various small and medium-sized industrial businesses and the creation of 75 jobs

Bronx, NY – New York City Economic Development Corporation (NYCEDC) today announced the selection of Mutual Housing Association of New York (MHANY) as the next awardee of the Industrial Developer Fund (IDF) and as the recipient of the Industrial Developer Loan Fund (IDLF). The $18M allocation will support MHANY’s development of nearly 50,000 square feet of industrial space that will be part of The Peninsula, a vibrant 5-acre, mixed-use campus in the Hunts Point section of the South Bronx.

The Peninsula is expected to bring 740 affordable housing units, a community facility, artist workspaces and open, industrial and commercial space online in three phases by 2021, 2022 and 2024. The project will support various Bronx-based small to medium-sized industrial and light manufacturing businesses that will create approximately 75 jobs, as well as business incubation in emerging sectors. NYCEDC has allocated $15 million through the IDF award, $3 million through the IDLF program, and MHANY also received an additional $3 million loan through Association for Neighborhood and Housing Development’s (ANHD) Urban Manufacturing Accelerator Fund, supported by founding investor Citi Community Development for pre-development and application costs.

“The Peninsula mixed-use development is going to bring much-needed investment to the Hunts Point community through industrial job creation, 100% affordable housing, and a wealth of community space,” said NYCEDC President and CEO James Patchett. “NYCEDC is proud to allocate much-needed funding to support the critical industrial components of this transformative project. I congratulate MHANY and their project partners on the closing and look forward to the ground-breaking.”

“The Peninsula is a tremendous project, and I am thrilled to see it moving forward. I am proud to have provided this project with $800,000 in funding from my capital budget to help make it possible,” said Bronx Borough President Ruben Diaz Jr. “The reimagining of Spofford, replacing the juvenile detention center with affordable housing, living wage jobs, day care opportunities, health opportunities and retail, is a tremendous step forward for The Bronx, emblematic of the transformative changes we have seen in the borough since I took office. I want to thank the New York City Economic Development Corporation and Mutual Housing Association of New York for the commitment to make The Peninsula a reality.”

“The Peninsula’s Building 1A highlights a great example of what equitable economic development can look like.” said Council Member Rafael Salamanca, Jr. “It includes development that smartly addresses job creation in and for our neighborhoods while preserving the industrial fabric of our communities.  It is that same industrial fabric that provides community residents with access to quality jobs and economic mobility. When completed, The Peninsula will serve as an economic engine for the Hunts Point Community. I applaud MHANY, NYCEDC and ANHD for their partnership in making this project a reality.”

“MHANY is delighted to close on a project that we know will be beneficial to the economic development in Hunts Point,” said Ismene Speliotis, Executive Director of MHANY. “This industrial development provides a modern space for future employers to hire Hunts Point residents for quality jobs, that can assist in building community power, wealth, and neighborhood stability. Due to the high construction costs, our project would not be possible without access to the industrial developer fund and the urban manufacturing accelerator fund.”

“MHANY’s closing today represents a big step forward towards our larger goal of creating an equitable economic development ecosystem in New York City,” said Association for Neighborhood and Housing Development Executive Director Benjamin Dulchin. “ANHD has been pushing for more clarity around equity in the city’s economic development investments since 2015, starting with manufacturing—a growing field with high-quality jobs and economic growth opportunities for and in low-wealth communities. Our strategy is to build off the affordable housing ecosystem we’ve developed since 1974 and create the same high level of engagement and tools for economic development so that the City invests more equitably in its communities. The involvement of mission-driven developers in economic development is key to promoting equity.”

For over 30 years, MHANY has promoted, developed, and managed affordable housing in New York City. The MHANY program began as a response to squatters that occupied vacant, city-owned sites in the East New York, Brooklyn. The NYC Department of Housing Preservation and Development (HPD) created the program to dispossess in-rem buildings and turn illegal squatters into legal homesteaders. With the assistance of the Urban Manufacturing Accelerator Fund (UMAF) – supported by founding investor Citi and managed by ANHD – industrial developers like MHANY receive hands-on technical assistance and pass-through grant funding of up to $60,000 to augment pre-development expenses related to closing on the NYCEDC Industrial Developer Fund (IDF).

The IDF is a public-private fund designated to catalyze and support industrial development across the city to ensure that longstanding businesses and new firms have the space to expand and create good jobs for all New Yorkers. Selected through a rolling Request for Proposals (RFP) process, eligible projects must include rental rates no more than 80% below Fair Market Rental value and are required to reinvest revenues into projects that will promote further development of industrial space within the City. Projects must also include M/W/D/BE components in their proposals.

The new and current investments will generate more than 20,000 new jobs and support the city’s existing 530,000 manufacturing and industrial jobs, which represent 15.4 percent of the city’s private sector workforce. The sector is an important pathway to the middle class for many families, with median wages of $50,400 a year. Approximately 63 percent of industrial and manufacturing sector jobs are available to individuals who do not have a college degree.