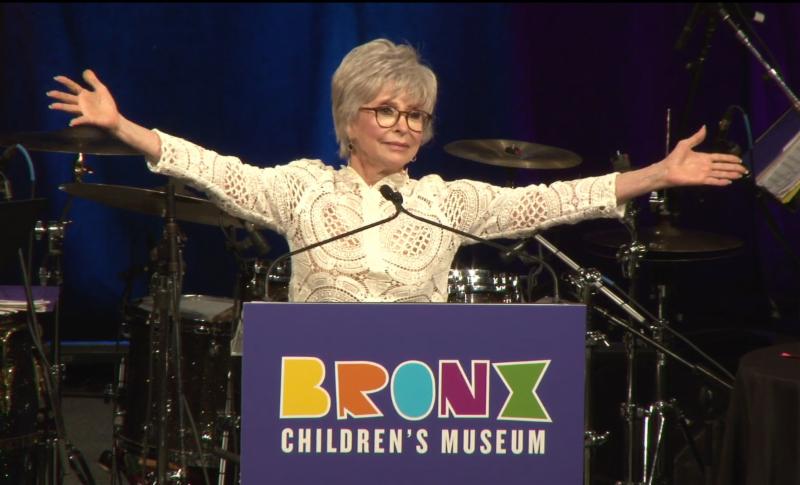 Bronx Children’s Museum (www.bronxchildrensmuseum.org) congratulates Rita Moreno, recently honored at the Bronx Children’s Museum’s Gala on May 7th, for receiving the Peabody Career Achievement Award this past Saturday, May 18. With the addition of this award, Rita has become the first Latina to win all of the most prestigious awards in show business: the Peabody, two Emmys, a Grammy, an Oscar and a Tony.

Executive Director Carla Precht stated at the gala, “Our 2019 Gala Honoree Rita Moreno exemplifies what the Bronx is all about and what every child in the Bronx is capable of becoming when they dream big and shoot for the stars.”

In her acceptance speech Ms. Moreno recounted stories of growing up in the Bronx and the significance that dreaming has played throughout her life. She ended her remarks with a heartwarming rendition of “Dream” by Johnny Mercer. Ms. Moreno’s words emphasized Bronx Children’s Museum’s goal to inspire children to dream big, work hard and follow their passions.

At the Gala, Emmy-winner Sonia Manzano, “Maria” from Sesame Street, commented that “Rita Moreno is a master of acting. Her heart and personality shine through every acting style that she dominates. When there were no Latinos in the media she shone through in West Side Story. Seeing this beautiful, exalted “Puerto Rican-ness” on the big screen took us aback and gave us a glimpse of what was possible in many of us. She raised the bar for all of us thespians.”

“We couldn’t be more thrilled that Rita who was home grown in the Bronx is the first Latina to become a PEGOT achiever and is one of only three Americans ever to win all five awards,” stated Rubén Díaz Jr. at the Bronx Day Parade this past Sunday, May 19. “The fact that she is the second person to ever receive the Peabody Career Achievement Award is a testament to the possibilities of every Bronx boy and Bronx girl.”

Díaz continued, “Bronx Week (May 10 – May 19) honors those citizens and institutions that contribute greatly to the rich culture and diversity which defines the uniqueness of the Bronx. Rita is certainly a Bronx favorite. It could not be more fitting to see her receive such high recognition and accolades especially this week.”

The Bronx Children’s Museum congratulates Ms. Moreno on her tremendous success and continues to honor her as a role model for every child in the Bronx.

ABOUT THE BRONX CHILDREN’S MUSEUM

Founded in 2005, Bronx Children’s Museum is a new kind of children’s museum “with and without walls” in the only borough—The Bronx—that until very recently did not have a children’s museum. Currently operating “without walls” in schools, shelters, parks and community agencies, the Museum provides programming to 16,000 children annually. In 2020, the Museum will also open its permanent home near Yankee Stadium. The Museum offers arts enrichment, environmental education and interactive exhibits designed to connect children with their families, their communities and the Bronx, instilling empathy, compassion and stewardship. www.bronxchildrensmuseum.org