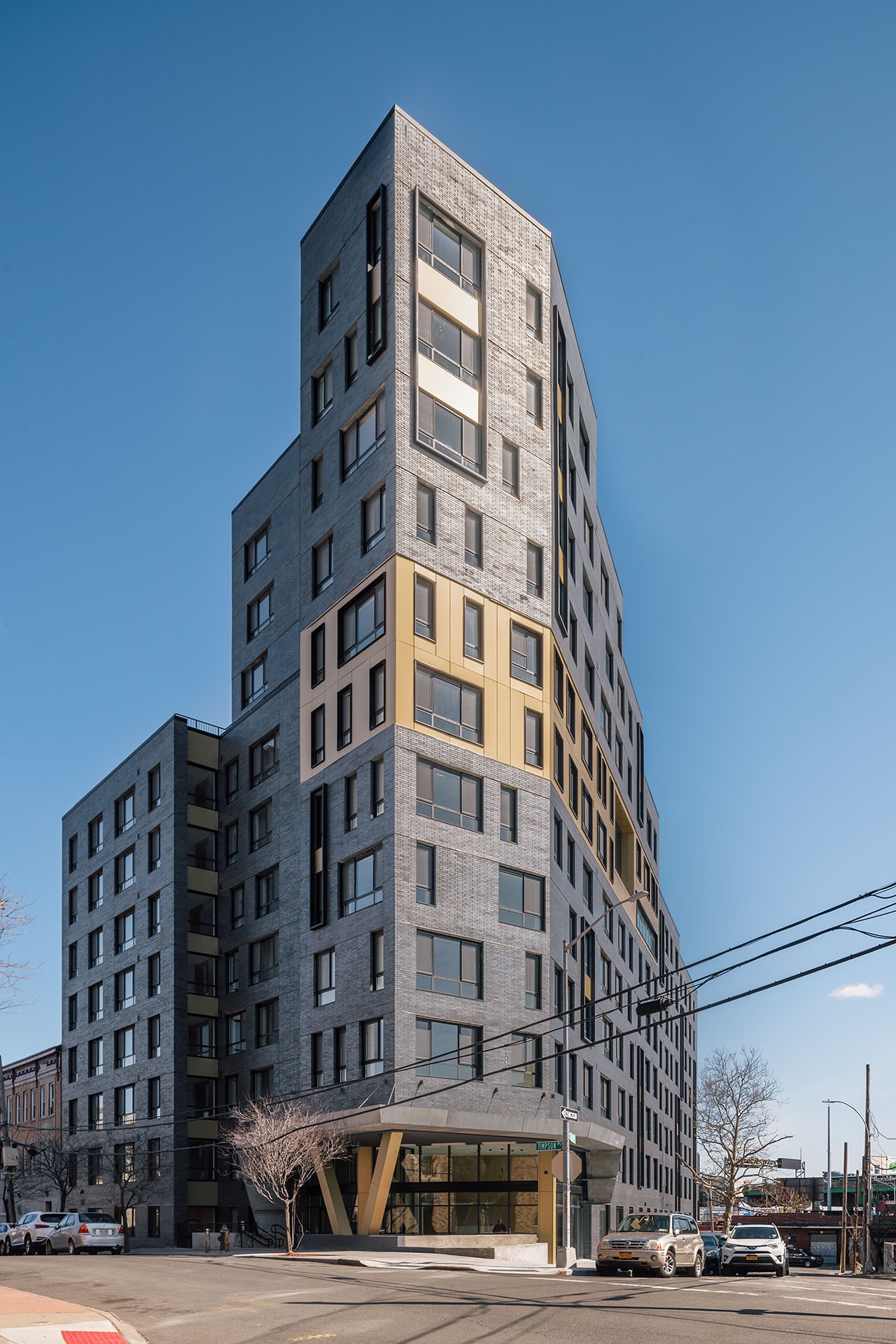 Bronx, NY (March 4, 2018) – Today, Radson Development, the New York City Housing Development Corporation (HDC), the Department of Housing Preservation and Development (HPD), Bronx Borough President Ruben Diaz and Council Member Diana Ayala celebrated the opening of MLK Plaza with a ribbon cutting. MLK Plaza, a 12-story building located at 869 E. 147th St in the Bronx, will provide affordable housing to New Yorkers at a range of income levels, and will contribute to the city’s growing stock of permanently affordable units as one of the first buildings completed under the city’s MIH program.

Financed under HPD and HDC’s Extremely Low and Low-Income Affordability Program (ELLA) and HPD’s Our Space Initiative, MLK Plaza provides 167-units of all affordable housing with units available to individuals earning $21,930 up to a family of three earning just over $75,000 per year. 33 of the units are set aside for formerly homeless households. The building was designed by Magnusson Architecture and Planning (MAP) under LEED Platinum standards, and is comprised of 25 studios, 57 one bedrooms, 60 two-bedrooms, 24 three-bedroom apartments. The building also includes a 722 square foot community room and a green roof.

“MLK Plaza is an amenity rich, technologically advanced, energy efficient, active lifestyle building that is 100% affordable,” said Dan Rad, Principal of Radson Development. “Radson Development is proud to bring this state of the art building to Mott Haven, and we are grateful to all our partners that helped make this dream a reality.”

“MLK Plaza is a testament to our efforts to create new housing units and keep our borough and our city affordable,” said Bronx Borough President Ruben Diaz, Jr. “Since 2009, we have invested $1.6 billion towards the creation of over 6,100 affordable units across 68 projects, mostly for low-income families, including $500,000 in capital funding for this worthy project. MLK Plaza will not only provide necessary affordable housing units for the borough but considering that permanent supportive housing is the key to preventing recurring homelessness, these new units will also help alleviate the homelessness problem.”

“Through Housing New York, we aren’t just producing affordable housing at record pace, we are transforming the way our city grows by ensuring it is more equitable for future generations of New Yorkers.  One of the first projects to be financed after the passage of Mandatory Inclusionary Housing, 68 of the 167 affordable homes at MLK Plaza will be permanently affordable,” said HPD Commissioner Maria Torres-Springer.  “I want to thank the Borough President, the teams at HPD, HDC, and DCP, Radson, and all our development partners for bringing this beautifully designed building over the finish line and creating a lasting asset for the community.”

“Today we are celebrating the completion of 167 new homes at MLK Plaza that will serve some of our city’s lowest income New Yorkers, including the formerly homeless.  And as one of the very first projects to benefit from permanent affordability under the City’s Mandatory Inclusionary Housing program, 68 of these units are guaranteed to be an asset to the Mott Haven community for generations to come,” said HDC President Eric Enderlin. “Thanks to all our elected officials and project partners for their ongoing support of our efforts to build a more inclusive and affordable city through the Housing New York.”

“We’re so proud of what MLK Plaza represents, it’s a statement that everyone deserves quality housing design. And we’re honored that Radson trusted us to deliver on that vision,” said Fernando Villa, Principal, MAP.

“MLK Plaza is an affordable housing development that hits many marks, including LEED Platinum certification, affordability to a wide range of income levels, and being one of the first projects done under the City’s MIH program,” said William Yates, a Director with Citi. “The building is striking – both from a distance, with its vivid yellow and silver cladding, and up close, with its cantilevered entrance and the graffiti mural in the lobby. This project is prime example of many parties coming together to address housing affordability and sustainability.”

The total development cost for MLK Plaza is approximately $63.71 million. HDC funding sources for this development include $27.72 million in tax-exempt bonds and approximately $10.86 million in corporate subsidy. HPD provided nearly $12.53 million in subsidy plus an additional $6.6 million under the OurSpace Initiative to fund the homeless units.