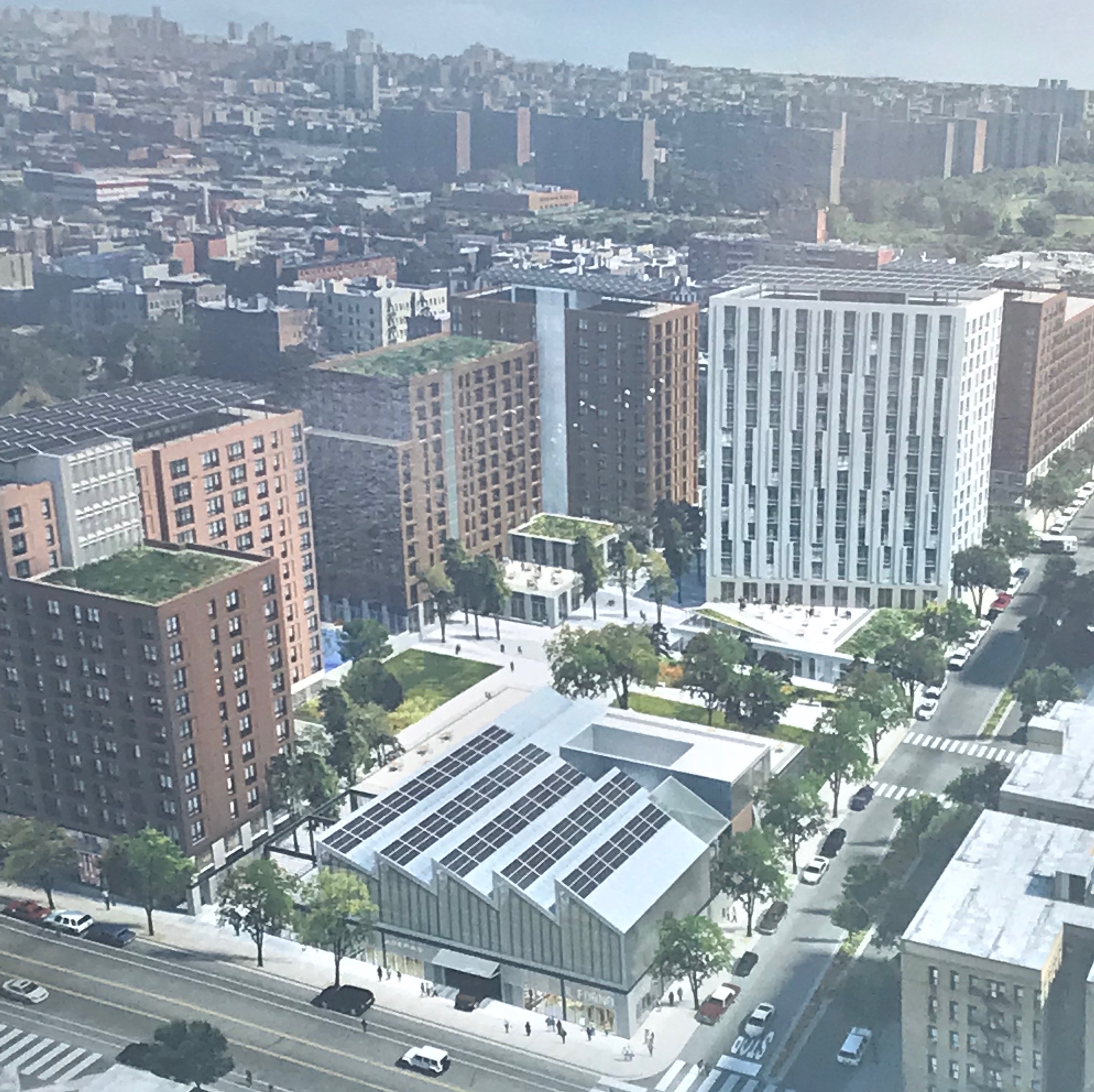 “The Peninsula is not only a model of smart mixed-use development and a demonstration of the power of public-private partnership – it is a symbol of the continued revitalization of the South Bronx,” said Deputy Mayor for Housing and Economic Development Alicia Glen.

“The demolition of the former Spofford Juvenile Detention Center marks a new beginning for the Hunt’s Point Community. The transformation of this facility into the Peninsula will provide much-needed affordable housing, and community, commercial and industrial space for the Hunts Point community while creating hundreds of good-paying jobs for New Yorkers,” said NYCEDC President and CEO James Patchett. “I want to thank Councilmember Rafael Salamanca, Jr., Bronx Borough President Ruben Diaz Jr., Assembly Member Marcos Crespo, our development partners, and the many community leaders and activists who worked hard to make today possible.”

“Today, we start writing an exciting new chapter for this site and the surrounding neighborhood. At the Peninsula, we’re seizing a major opportunity to revitalize this area and bring over 700 new affordable homes, high quality jobs, and vibrant open space to Hunts Point,” said HPD Commissioner Maria Torres-Springer. “I applaud Council Member Salamanca and Borough President Diaz for their leadership and vision and thank our partners in the community for their ongoing work to fight for changes in our communities that help our neighborhoods thrive.”

“The demolition of the former Spofford Juvenile Detention Center reflects the City’s continued commitment to implement reforms that are responsive to the needs of youth involved in the juvenile justice system as well as the needs of the community at-large,” said ACS Commissioner David A. Hansell. “Thank you to Council Member Salamanca and the Economic Development Corporation for committing to this transformative effort.”

“The significance of this moment cannot be understated. For so many years, this site was the physical and emotional embodiment of rampant violence and crime in the Hunts Point community. Transforming the Spofford Juvenile Detention Center into La Peninsula, a vibrant hub for the community with 100% affordable housing, commercial and retail spaces, is a testament to the work of community, city and state leaders who have helped make this a reality. As someone who remembers Spofford when it was at its worst, it’s a privilege to have been a part of this project and seeing it through the process,” said Council Member Rafael Salamanca Jr.

“The reimagining of Spofford is a tremendous step forward for The Bronx and a real victory for Hunts Point, and I am proud to have provided this project with $800,000 in funding from my capital budget to make this new development possible. We are here today to remove possibly the biggest eyesore in the neighborhood. We are taking away a community blight and replacing it with affordable housing, living wage jobs, day care opportunities, health opportunities and retail. I want to thank NYCEDC, Council Member Salamanca and the community stakeholders who worked so hard to make this project a reality for their partnership. This is a great day for The Bronx,” said Bronx Borough President Ruben Diaz Jr.

“The demolition of the former Spofford Youth Detention Center is a perfect example of the growth and positive change The Bronx now represents. The very same land that once imprisoned our youth will be transformed into a place of pride, hope and opportunity,” said Assembly member Marcos Crespo. The Peninsula development will bring about new affordable housing, accessible recreational space as an epicenter for economic development. With the cooperation of community activists, city agencies and local officials this project is surely to be a model the rest of the city should follow. I am proud to be part of this Moment and I am grateful to NYCEDC, Councilman Rafael Salamanca, Bronx Borough President Ruben Diaz Jr. The development team and local CBO partners and everyone who made sure this vision became a reality.”

“After seven years of it sitting vacant, I am happy to see the former Spofford Juvenile Center finally turning its negative presence in the community into an innovative campus with 100 percent affordable housing, commercial space and open recreational space,” said State Senator Luis Sepulveda. I salute Mayor de Blasio and his administration, especially the Economic Development Corp. and Department of Housing Preservation and Development for its efforts on behalf of the Hunts Point community.”

“This has been a long day in the making and Hunts Points residents should be proud and celebrate the Peninsula project,” said Ralph Acevedo, Community Board 2 District Manager. Over the course of several decades we have been advocating for a new purpose for this site, and I’m proud that this project delivers on what Hunts Point needs: affordable housing, open space, health and wellness, and most of all new employment opportunities. We thank Council member Salamanca, Bronx Borough President Diaz Jr., and Mayor De Blasio for giving the Hunts Point community the opportunity to successfully see its vision come to reality”.

“We have worked together for the betterment of this community for many years and today our efforts finally pay off. We recognize organizations such as Mothers on the Move and the many community leaders who fought for a better future for our neighborhood. Rising from the dirt will be an amazing new development that will bring new jobs, affordable housing and open space. We’re excited about the changes coming to Hunts Point and the opportunities ahead.  We are grateful to our leaders Councilmember Salamanca and Borough President Diaz Jr., and the NYCEDC and HPD for all of their contributions,” said Maria Torres, Co-Founder and President of The Point.

“This demolition ceremony is an opportunity to celebrate the accomplishments of Mothers on the Move and others in the Hunts Pont community who successfully campaigned to close the Spofford Juvenile Detention Center and helped create a new vision for the site,” said Gilbane Development Company Chairman and Founder Bob Gilbane.  “Along with our development partners Mutual Housing Association of NY (MHANY) and Hudson Companies, our community sponsors Urban Health Plan and The Point Community Development Corporation, Gilbane Development Company is pleased to mark the occasion.  We look forward to continued collaboration with all involved to date as we build the Peninsula and bring new jobs, affordable housing, open space, day care, arts, retail and manufacturing spaces to the neighborhood.”

“Today is a celebration for the people of Hunts Point and the South Bronx,” said Aaron Koffman, Principal, The Hudson Companies. Although Hudson and its partners came along in the last few years to help bring The Peninsula redevelopment closer to reality, area residents have endured a long struggle to see the Spofford Juvenile Detention Center transformed from a roadblock to an opportunity for South Bronx youth. We were honored to be designated by the City of New York and remain grateful to Councilman Salamanca, Community Board 2, Borough President Diaz, the City and Hunts Point community leaders and voices for being true partners in bringing affordable housing, economic development and community space to the neighborhood.

“The Peninsula development provides a phenomenal opportunity to bring community, housing and economic development together in a unique and vital way.  The planning, development and design of the residential and light industrial spaces have been created with community resident involvement in an effort to ensure that both living and work spaces reflect what the community wants and result in what the community needs.  MHANY is thrilled that our work in Hunts Point beginning in 2008 has an opportunity to grow with something so comprehensive and deeply imbedded in the community,” said Ismene Speliotis, Executive Director, MHANY Management Inc.

“Urban Health Plan is proud to be part of The Peninsula.  Today is a historic day for Hunts Point as the demolition of the Spofford Detention Center with make way for the construction of a state-of-the-art development that will bring not only affordable housing to our beloved neighborhood but also businesses and jobs,” said Paloma Hernandez, President and CEO, Urban Health Plan, Inc. “Urban Health Plan will offer an innovative health and wellness center that encourages active living and incorporates nutrition, spirituality and stress reduction techniques.  Our project also includes a Mercado, a community space that will provide Hunts Point residents access to fresh, healthy food choices. We are grateful to our elected leaders Councilmember Salamanca and Borough President Diaz Jr., and Mayor De Blasio’s administration for their continued support.”

“The Hunts Point Alliance for Children celebrates the transformation of the Spofford property into a symbol of the growth and resilience of the Hunts Point neighborhood,” said Hunts Point Alliance for Children Executive Director Jill Roche. The development will be an important anchor community asset, and we celebrate that it will include amenities that address children’s primary needs, including open space and wellness opportunities, increase capacity for La Peninsula Head Start to prepare more community children for Kindergarten, and provide affordable housinxg for families.”

Today’s demolition event follows the unanimous approval by the City Council as part of the City’s public review process in March 2018. Development of the Peninsula will occur in three phases, with construction expected to start in winter of 2019 and be completed in 2024. EDC anticipates closing on the first phase in December 2018. Additionally, the development team will participate in HireNYC, a free NYCEDC program that connects the City’s workforce development services to various projects.