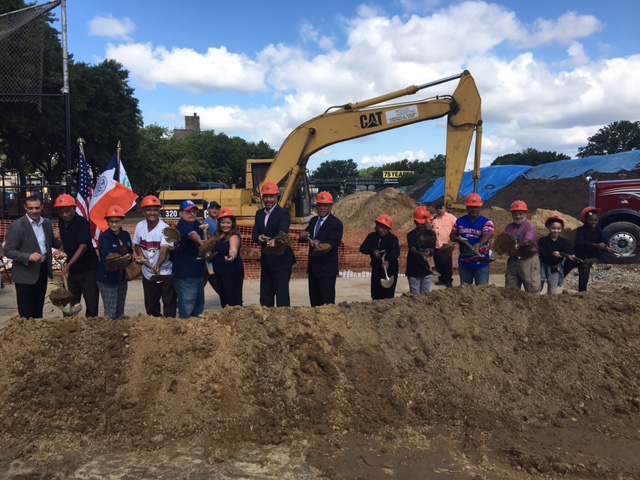 “We are excited to break ground on the next phase of this project. The renovated ballfields and running track will provide key recreational amenities for this community,” said Commissioner Silver. “Coupled with the revamped playground that we opened in July 2017, the upgrades we are making will transform Parque de los Niños into a world-class park. “

This $3.4 million project to reconstruct the softball fields and running track was funded with $2,000,000 from the Borough President, $800,000 from the City Council, and $672,000 from the Mayor’s office. The improved Parque de los Niños will feature a new synthetic turf mini soccer field and an all-weather running track. Additionally, the project will reconstruct two of the existing ball fields with new skinned infields, natural turf outfields, ADA compliant dugouts, and a drinking fountain.

“I have had a strong connection to Parque de los Niños going back to my time in the New York State Assembly. This park is a critical hub for the Soundview neighborhood, and the nearly $3.5 million I was able to provide this project from my capital budget will help renovate athletic fields and keep this community active and healthy. I thank the Department of Parks & Recreation for their partnership on this wonderful project,” said Bronx Borough President Ruben Diaz Jr.

The reconstruction of the softball fields and running track is designed to seamlessly integrate with Phase I of this project—funded by the Borough President and the Mayor’s Office— which revamped the playground and seating area of this park. The upgraded playground reopened in July 2017. Phase II is slated to be complete by late summer 2019.