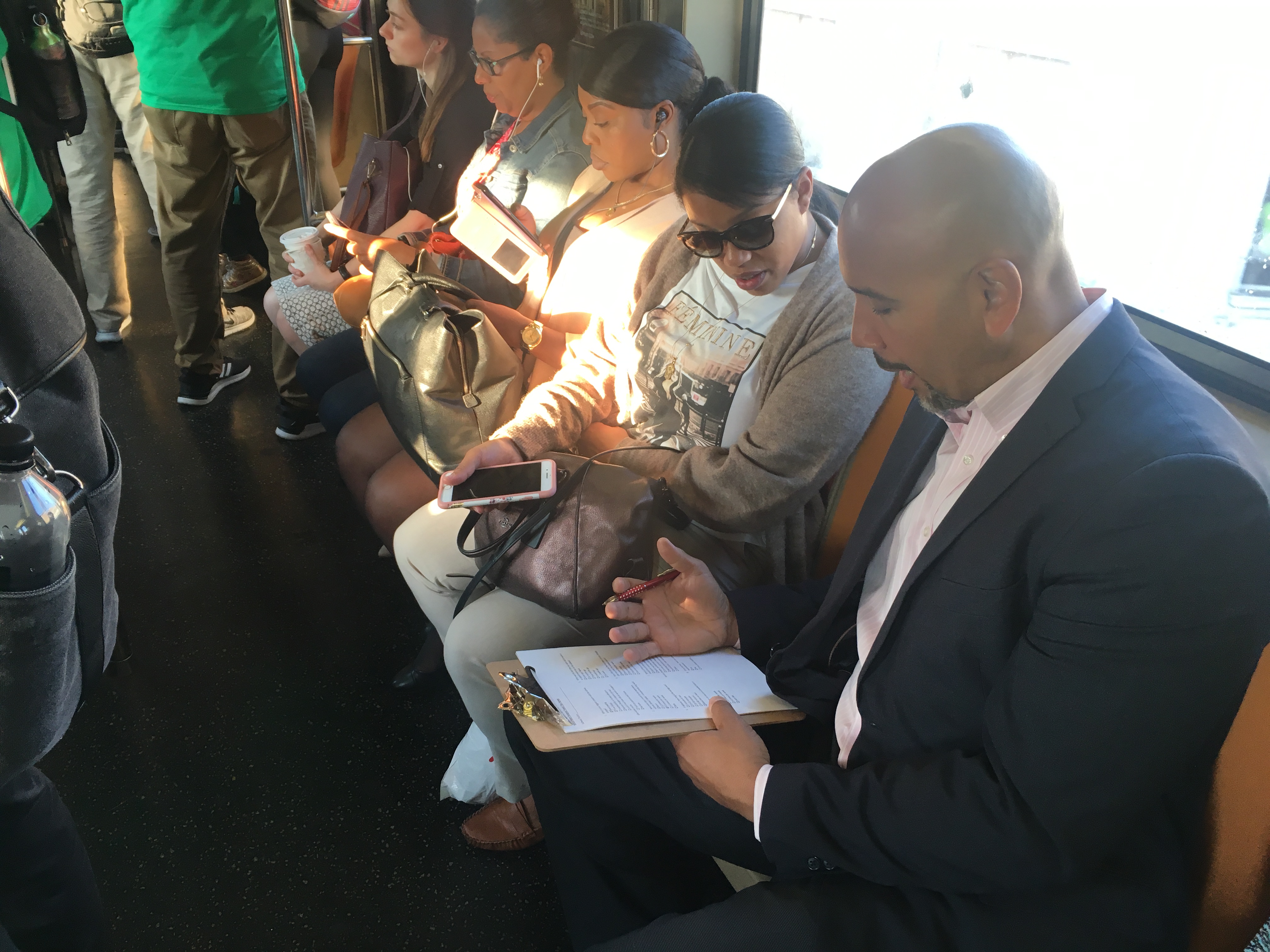 New York, NY – Today, Elected officials, advocate groups, and volunteers are preparing to meet fellow straphangers and ride the rails. A year after Governor Cuomo declared the MTA under a state of emergency, city & state officials and public transportation advocates are returning to the subway platforms to hear from riders, commuters and visitors.

The coalition is proud to announce the “Second Annual 24-Hour Transit Tour.” The tour will take place from 7 AM to 7 PM, Wednesday, October 3rd and Thursday, October 4th, traveling across all five boroughs. The annual event is organized by NYC Council Transportation Committee Chair Ydanis Rodriguez, in conjunction with NYC Council Speaker Corey Johnson, each actively engaged in the oversight over the city subway system.

They will be joined by elected officials, advocates and volunteers, riding from station to station to document feedback about riders’ commutes, hear directly from riders about conditions in the transit system, and to assess the modifications since last year. The results of the tour will be shared at an upcoming NYC Council Transportation Committee hearing later this month on the NYC Subway System and the Fast Forward Plan. The full tour route can be found below.

“Riders want their concerns heard and addressed in a timely manner. Riders are frustrated. I’m ready to listen and hear how they’re feeling in terms of safety and accessibility, work with my colleagues and advocates, and hold a Council Transportation Committee hearing after analyzing the information we gather,” said Council Member Rodriguez, Chair of the Transportation Committee.

“With the subways failing us on an almost daily basis, it is absolutely critical that elected officials ride the subway and hear from riders directly about the challenges they face each day. You can’t truly understand our transportation crisis unless you understand the human cost of constant bad service and delays. I am proud to be a part of the Second Annual 24-Hour Transit Tour and I look forward to working together with Council Transportation Chair Ydanis Rodriguez, our colleagues in the Council and in state and federal government, advocacy groups, and of course the riders themselves to fix our subways and save our city from this mass transit mess,” said NYC Council Speaker Corey Johnson.

“Our subway system is the life of New York City. As elected leaders, it is important that we hear directly from commuters about the pros and cons of their commutes as well as their concerns for the future of the system, and this event gives us the opportunity to do just that. I thank Speaker Johnson, Council Member Rodriguez and the entire coalition for once again hosting this ’24 Hour Transit Tour,’ and I look forward to hearing from commuters directly this morning,” said Bronx Borough President Ruben Diaz Jr.

“I am thrilled to once again participate in the Riders Respond Transit Tour. Last year, touring the subways brought much needed attention and focus to the public and my fellow elected officials of the needs of our outdated and dilapidated transit system. I have long been a vocal advocate for properly funding and fulfilling our obligations to the public transit system which is the lifeblood of any city, and I look forward to continuing that advocacy,” said Assemblyman Jeffrey Dinowitz.

“I’m proud to be a sponsor the 2nd annual Riders Respond Tour.  Our communities continue to raise their voices on the state of the subway system and we must listen,” said Assemblywoman Carmen De La Rosa. “On a daily basis, straphangers are forced to confront widespread delays, unreliable service, dilapidated stations, spotty elevator service and a serve lack of accessibility throughout the system. Solutions will require modernization, the restoration of reliability, and the addition of capacity and accessibility.  My commitment is to make sure that rider voices are heard and responded to with action by government.”

“It came to no surprise when Governor Cuomo announced a state of emergency for the MTA last year,” said Assemblywoman Nathalia Fernandez. “Our cities public transportation infrastructure, which is utilized daily by nearly 6 million commuters, was in dire need of an update. The Second Annual 24-Hour Transit Tour that I, and other elected officials, have sponsored will allow us to receive feedback on the modifications made and on what issues the commuters continue to have. Hearing from our constituents helps us as we identify what work needs to be done. This is an important step towards resolving the MTA Crisis.”

“I look forward to hearing firsthand from riders about their challenges commuting around New York City. As an avid rider of the subways myself, I know how delays, accidents, and breakdowns affect New Yorkers daily and I am committed to getting to the bottom of those problems,” said Assembly Member Jo Anne Simon.

“It’s an honor to be a part of the 2nd Annual Riders Respond Transit Tour. Many NYC residences rely on the transit system for transportation as they travel to work and home. We need to reiterate the importance of bettering the MTA System. It starts with having a conversation with our riders, as they are our stakeholders who commute every day. Relating their message so that we can ensure their voice is not only being listened to but that actions are being taken,” said Assemblywoman Maritza Davila.

“I look forward to working with the New York City Council on establishing a discourse and collecting feedback from riders so that our public transit system can get the improvements that straphangers deserve,” said Assembly Member Michael DenDekker.

“The subway is the city’s veins, its arteries, and its heart. Without it, New York as we know it couldn’t exist,” said Manhattan Borough President Gale A. Brewer. “Whether we’re on a bus surveying streets to prepare for the L train shutdown, or we’re riding multiple subway routes and talking about delays and capital needs, it’s crucial that all the city’s elected leaders take a look at more of the system together, and not just our individual commutes. I thank Council Member Rodriguez for starting the Riders Respond Tour as an annual tradition, and will continue to partner with him to try to find ways through our ongoing transit crisis.”

“It’s crucial that all leaders understand exactly how the conditions of the transit system impact commuters every single day,” said Public Advocate Letitia James. “I am proud to be a sponsor of the second annual 24-hour Transit Tour so that we can get the feedback necessary to make positive and lasting changes to our City’s vast subway system.”

“It has been more than a year since Governor Cuomo declared the subways in a state of emergency, and since the MTA implemented its $836 million Subway Action Plan. And hardly anything has changed.” said Council Member Brad Lander. “We’re sick of hearing the same old excuses from the Governor — we want to hear from you. How does your subway commute affect your quality of life?  I’m proud to join Transportation Committee Chair Rodriguez, Council Speaker Corey Johnson, Riders Alliance, Transportation Alternatives, and advocates for the Second Annual 24-Hour Transit Tour to help give NYC commuters a voice. A subway system that leaves straphangers chronically late, stranded, and even flooded has real and long term consequences for the people of this city, and we’re going to make them heard.”

“With delays becoming routine and ridership plummeting, it has never been more urgent for public officials to understand how the subway crisis is affecting everyday New Yorkers. The Annual Riders Respond Transit Tour gives us the opportunity to hear directly from some of the over five and a half million commuters who use our subways every day. From adding accessibility features to communicating more clearly about service changes, there is so much we could be doing right now to improve the subway experience for New Yorkers. I look forward to the tour, and would like to thank the Transportation Committee Chair Ydanis Rodriguez for his leadership,” said Council Member Rafael Espinal.

“Glad to bring chair of the NYC Council Transportation Committee Chair Ydanis Rodriguez with my colleagues to Astoria to talk about how far we still need to go to ensure the N/W line is reliable to our community,” said Council Member Costa Constantinides, District 22. “We must hold the MTA accountable because riders deserve a reliable transit system that gets them to work and home on time.”

“Beyond the headlines, riders who are disabled endure frustratingly long and unpredictable commutes due to the abysmal lack of accessible subway stations,” said Colin Wright, advocacy associate at TransitCenter. “This tour is an opportunity for legislators to hear directly from riders, but the subway accessibility crisis will continue unless Governor Cuomo and leaders of the New York State Legislature take action and fund the Fast Forward plan.”

Dustin Jones, a board member of Center for the Independence of the Disabled, New York (CIDNY), says: “As a wheelchair user, I’m happy to see more attention being paid to subway access in the Bronx. I lived here for two years and struggled frequently with moving throughout the transit system. Lack of transportation access limits our ability to get to doctor appointments on time, to visit friends and family, and to get to work. We need a fully accessible system with accountability, a timeline, and a budget.”

“The state of the transit system is not befitting of a world class city like ours,” said Paul Steely White, executive director of Transportation Alternatives. “We look forward to joining Council Member Rodriguez to talk with transit riders across the city to learn how the city’s transportation alternatives can better serve their needs.”

John Raskin, Executive Director of the Riders Alliance, said: “Transit riders are very grateful to Council Member Ydanis Rodriguez for highlighting the importance of subway service. When he and his colleagues get on the train, they’ll find what New York’s several million riders are all too familiar with. They’ll confront widespread delays, unreliable service, dilapidated stations, and very few elevators. They’ll see how badly the system requires modernization. “The MTA’s Fast Forward plan would restore reliability and add capacity and accessibility. By riding the subway, elected officials will become better acquainted with the pressing need for state government to fund Fast Forward. Congestion pricing is fair and sustainable and should be the foundation of Albany’s transit funding policy.”

“If we are going to meaningfully address climate change, New York City needs a functioning subway system,” said Shay O’Reilly, New York City Organizing Representative for the Sierra Club. “This shared, public good should be a reliable and low-pollution way for New Yorkers to get to work, visit friends and family, go to doctors’ appointments, and travel around our city. We’re proud to work with the New York City Council to address this disgraceful state of affairs, and look forward to seeing action in Albany to repair, rebuild, and modernize our subway system.”

“Transit is the economic engine of our city. It is very important that it serves riders effectively as it provides them access to necessary opportunities. Meeting the riders needs and expectations must be one of the top priorities of our city,” said Dr. Camille Kamga, Director, University Transportation Research Center.

“The University Student Senate (USS) of CUNY is proud to partner with Council Member Ydanis Rodriguez, Speaker Corey Johnson. Riders Alliance, Transportation Alternatives and others on this years 24 Hour Annual Transit Tour” said John Aderounmu, CUNY Trustee and Chairperson of USS. “The majority of CUNY students use mass transit as our main mode of transportation and having a fully effective and efficient transit system is critical to students ability to attend class, meetings, work and remain engaged and active in our communities. USS will continue to partner with all who will push for an improved and satisfactory transit system.”