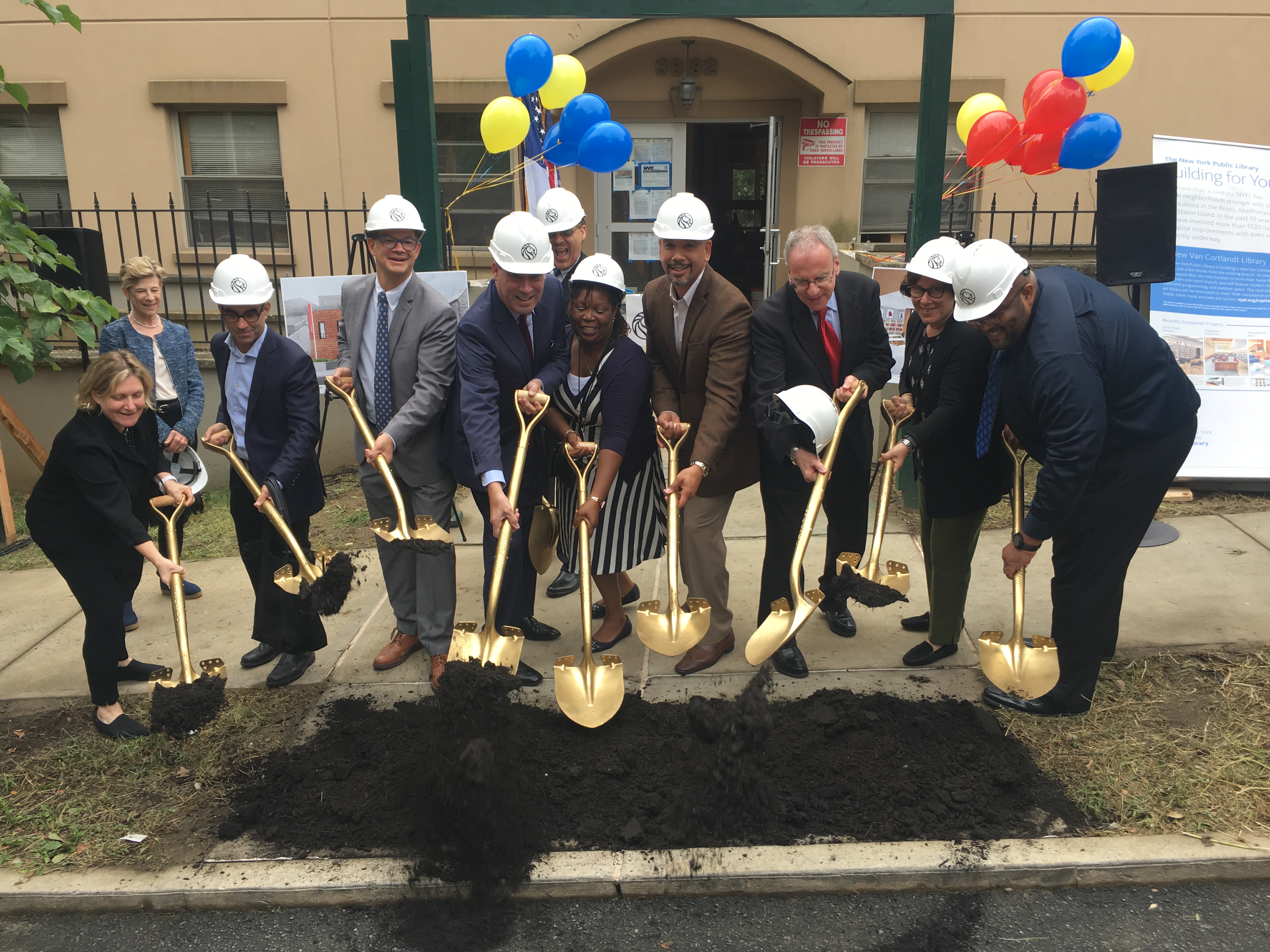 Elected officials and community members help kick off construction at a ceremony at the site of the new branch, set to open in summer 2019

OCTOBER 1, 2018 – The New York Public Library broke ground this morning on a new, larger Van Cortlandt Library in the Bronx.

The new 5,800-square-foot branch will be more than double the size of the current Van Cortlandt Library, and offer dedicated spaces for teens and children, a community room, and flexible spaces for a variety of uses. It is expected to open in summer 2019.

“It is clear that the Van Cortlandt community loves its library, and we are so proud to give this growing community the branch that it has long wanted,” said New York Public Library President Anthony W. Marx. “The new library — part of an unprecedented amount of capital investment in our branches — will be more than double the size of the current branch, and offer the flexible spaces and amenities that this community needs. We thank our partners in government for their generous support in making this important, long-awaited project a reality.”

The new $8 million branch — designed by Andrew Berman Architects and informed by community surveys and public meetings as part of the Library’s “Building for You” engagement program — will feature:

The Library purchased a site for the new Van Cortlandt Library in 2017, understanding the the community had outgrown the current one-room, 2,700 square foot branch at  3874 Sedgwick Avenue. The branch has been located there since 1968.

Despite its limited size, the current branch saw increased circulation and program attendance in Fiscal Year 2018, and received nearly 60,000 visits.

“The Van Cortlandt Village community has eagerly anticipated this new, state-of-the-art library branch, and I am thrilled to be here today with so many of my colleagues for this important ribbon cutting. The new Van Cortlandt Branch Library will provide the readers of the Northwest Bronx with a tremendous new facility, and I am proud to have provided $500,000 of my own capital funding towards this wonderful project. I would also like to thank the New York Public Library, Council Member Cohen, Assembly Member Dinowitz and State Senator Klein for the partnership on the development of a new Van Cortlandt Branch Library,” said Bronx Borough President Ruben Diaz Jr.

“The Van Cortlandt Public Library has always been much more than a place to simply, “find a great book;” It is a popular spot for community meetings, educational programing, and has provided free access to technology for thousands of residents in the Northwest Bronx area.” said NYC Council Member Andrew Cohen. “Now after 50 years of service to our community I am thrilled to join my colleagues in government and our partners at the New York Public Libraries on this groundbreaking for a much bigger and better facility – where The Van Cortlandt Public Library can continue to build upon the great work they already do. While this library project is a 21st century structural upgrade on the surface, at its core this project is also a major investment towards the enrichment of the 21st century minds of our community.”

“Libraries are an integral component of all communities, especially here in the Northwest Bronx. A new Van Cortlandt Library facility is a welcome change in the Van Cortlandt Village community and this is a tremendous use of a partially developed site which had been languishing for a decade, not to mention that the current facility is 50 years old and has seen a huge increase in usage in recent years. I am proud to have secured capital resources from New York State for this project and I thank my colleagues and the New York Public Libraries for their support as well. We can all look forward to a new library with double the amount of space, which will allow for more computers and community programming to benefit our neighbors,” said Assembly Member Jeffrey Dinowitz.

The New York Public Library is currently working on over $600 million worth of capital projects across its system, including several projects in the Bronx, such as the Van Cortlandt Library, the expansion of the Woodlawn Heights Library, and full renovations for Hunt’s Point and Melrose Libraries, among others.

About The New York Public Library

The New York Public Library is a free provider of education and information for the people of New York and beyond. With 92 locations—including research and branch libraries—throughout the Bronx, Manhattan, and Staten Island, the Library offers free materials, computer access, classes, exhibitions, programming and more to everyone from toddlers to scholars, and has seen record numbers of attendance and circulation in recent years. The New York Public Library serves more than 18 million patrons who come through its doors annually and millions more around the globe who use its resources at www.nypl.org. To offer this wide array of free programming, The New York Public Library relies on both public and private funding. Learn more about how to support the Library at nypl.org/support.