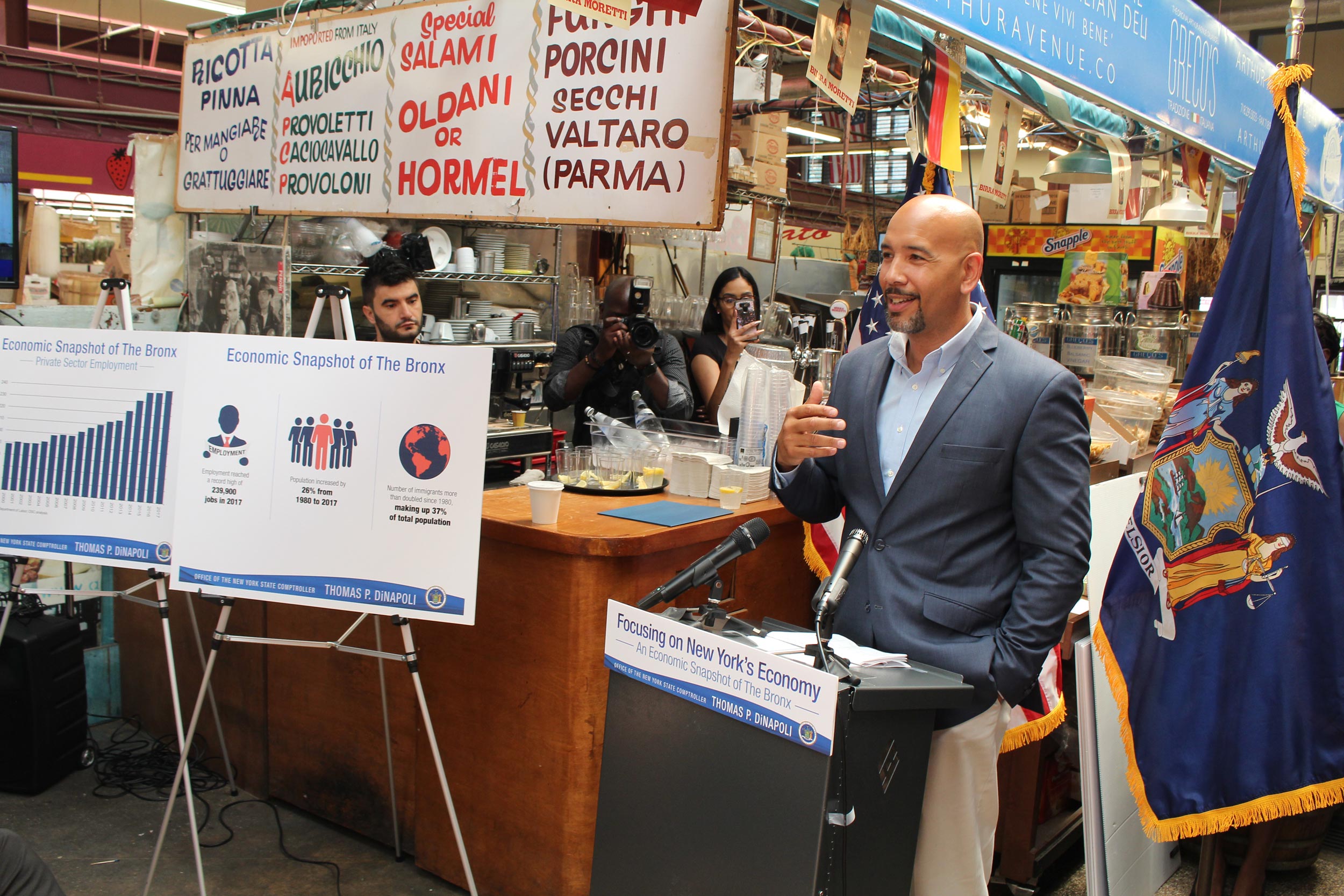 The Bronx is setting records for population, business and job growth, according to an economic reportreleased today by New York State Comptroller Thomas P. DiNapoli

“The Bronx has made great progress and has come a long way,” DiNapoli said. “It has set employment records for ten consecutive years. However, too many residents remain in poverty, unemployment is particularly high among the borough’s youth, and affordable housing is a big concern. I hope this report provides the borough’s elected officials, business community and social service providers with helpful information as they work to continue The Bronx’s revival.”

“The Bronx has seen incredible transformative development over the past nine years. Comptroller DiNapoli’s report not only highlights our successes but outlines our continuing challenges, as well,” said Bronx Borough President Ruben Diaz, Jr. “This Bronx Economic Snapshot is a useful tool for those interested in learning more about The Bronx, our borough’s needs and where our future lies, and appreciate the comptroller’s continued focus on our borough’s well-being.”

“Comptroller DiNapoli’s report of the Bronx’s economic success illustrates the resilience of the Bronx and the hardworking residents, especially our immigrant brothers and sisters,” said Assemblymember Marcos A. Crespo (D-Soundview, Clason Point, Longwood, and Hunts Point sections of The South Bronx). “All Bronxites should be proud of our economic growth and record low unemployment rates.”

“A renaissance in the Bronx is upon us – record low unemployment in the borough, strong private-sector job growth numbers, and record levels of taxable business sales. However, there are many areas which demand our attention as well,” said Assemblymember Jeffrey Dinowitz (D- Riverdale, Kingsbridge, Van Cortlandt Village, Kingsbridge Heights, Marble Hill, Norwood, Woodlawn and Wakefield). “As more people continue to move into the Bronx, affordable housing availability struggles to keep pace. The Bronx remains the least healthy county in New York State. Our median household income remains below the other boroughs. As a lifelong Bronxite I am more proud than ever to call the Bronx my home and look forward to continuing to work with my colleagues to make sure the Bronx is known as the best county in the state.”

“While the Bronx has managed to not fall into a rut during the post Great Recession economic turmoil, we still have some ways to go before we can truly consider ourselves financially stable,” said Assemblymember Nathalia Fernandez (D-Norwood, Morris Park, Pelham Parkway, and Allerton). “Local elected officials, community organizations, and social service groups must work together to ensure that businesses bolster in the Bronx and the residents who call this borough their home are not subject to poverty. We have a responsibility to our community members to support and provide a livable wage, good benefits, and stable housing.”

“I would like to thank State Comptroller DiNapoli for releasing an extensive report on the economic development in the Bronx,” said Senator Jamaal T. Bailey (D-Norwood, Bedford Park, Williamsbridge, Co-op City, Wakefield, Baychester and Mount Vernon). “Although the Bronx has done exceptional in economic growth over the past couple of years, as the report highlights there is more to be done, especially in the areas of affordable housing and youth services. I look forward to working with my colleagues in government to address these issues and to continue to make the borough of the Bronx thrive.”

“The City’s Department of Small Business Services is committed to unlocking economic potential for all New Yorkers,” said Gregg Bishop, Commissioner of the New York City Department of Small Business Services. “Through the supportive services offered at our NYC Business Solutions Center and Workforce1 Career Centers located in the Bronx, we are ensuring that Bronxites can grow their businesses and connect to employment right here in the borough.”

“The Greater Hunts Point Economic Development Corporation and Chamber agrees with the conclusions of the Comptroller’s report. The Bronx is truly on the move and Hunts Point and the industrial South Bronx are playing a major role in business expansion and job growth,” said Donald C. Eversley, Executive Director of Greater Hunts Point Economic Development Corporation & Chamber of Commerce. “However, sustained success will require continued investment in infrastructure, transportation, sustainability and industry-specific training. We also must take affirmative steps to assist home-grown entrepreneurs and make sure that economic vitality will reach into all corners of our community. We stand ready to work closely with the Comptroller and other government and private stakeholders to move our county forward.”

“This vital data will assist us in developing the roadmap to move the Bronx forward. While the report articulates various concerns, it also illustrates many areas of promise,” said Bronx Community Board 7 Manager Ischia Bravo. “Most importantly, it puts a bullseye on the challenges we face as a borough. And as always, Bronxites will rise to the challenge to provide a better future for our children, our families and our businesses. Once again, we applaud Comptroller DiNapoli for his leadership.”

“The Bronx continues to be an example to the world of how to implement community-based economic development strategies in the face of decades of disinvestment.” said Michael Brady, Executive Director of the Third Avenue Business Improvement District. “Bronxites, through our leadership, determination, and sheer commitment to our community have ensured that the economic future of the borough is not only strong, but continues to value community equity over profit.”

The Bronx was the only borough in New York City that did not lose jobs during the Great Recession. Since 2007, it has gained an estimated 40,900 private sector jobs (an increase of 21 percent),reaching a record of 239,900 jobs in 2017. Health care, leisure and hospitality, retail trade and social assistance accounted for more than three-quarters of the gains.

Job growth was fastest in the Morris Heights area, where employment grew by 41 percent. Growth was also strong in the Hunts Point area, which was responsible for nearly one-quarter of the private sector job gains in the borough since 2007.The area includes the Hunts Point Food Distribution Center, one of the largest food distribution centers in the world.

The Bronx’s population grew 26 percent between 1980 and 2017, reaching almost 1.5 million people, and it was the fastest-growing county in New York State since 2010. The borough’s population growth was driven by an increase in the number of foreign-born residents.

The number of immigrants in The Bronx has more than doubled since 1980 and made up 37 percent of the total population in 2016, up from 18 percent in 1980. Immigrants are a large part of the borough’s economic success, making up nearly half of the work force and 60 percent of self-employed entrepreneurs.

The Bronx experienced a 24 percent reduction in businesses between 1975 and 1984, much larger than the citywide decline. Since then, the number has grown by 35 percent, reaching almost 18,000 in 2017, the highest level since the data series began in 1975. Taxable business sales grew by 60 percent since the end of the recession in 2009 (faster than the citywide growth rate of 44 percent), reaching a record of $4.7 billion in 2016.

In 2016, 60 percent of the households in The Bronx devoted at least 30 percent of their incomes to rent (the level at which rent is considered a burden), higher than in any other borough and six percentage points higher than the citywide share.The number of households that faced a severe rent burden (devoting at least half of their incomes to rent) increased by 19 percent between 2007 and 2016.