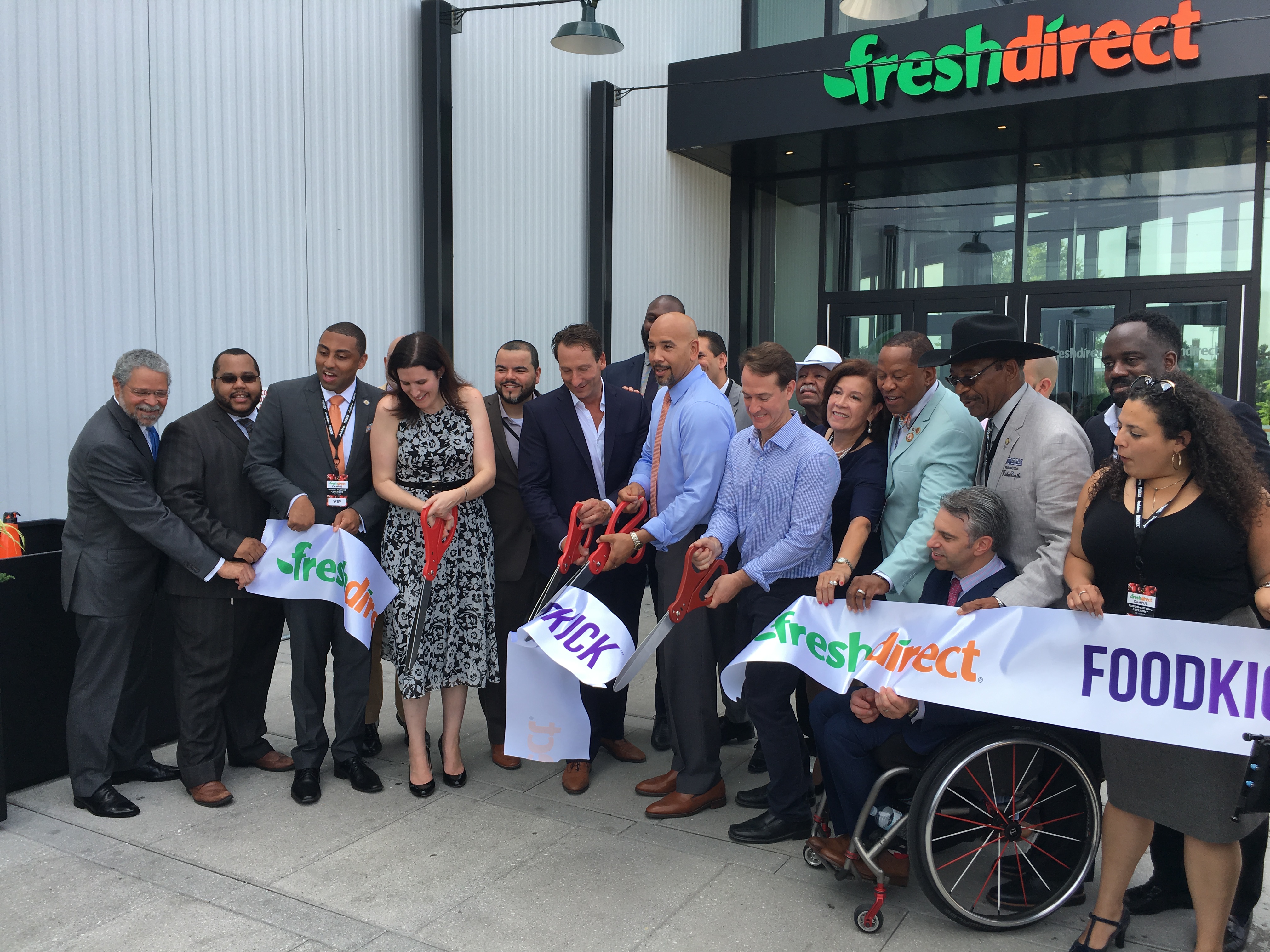 NEW YORK–(BUSINESS WIRE)–FreshDirect, the Northeast’s leading online fresh food grocer, today announced the opening of its FreshDirect Campus (FDC), a brand new state-of-the-art facility in New York City’s South Bronx community. The facility reimagines farm-to-fork food distribution and manufacturing, which will provide even higher-quality, fresher food for customers. It also enables the Company to add thousands of new products and accelerate its expansion into new geographies with its FreshDirect, FoodKick, and FreshDirect At The Office brands.

The state-of-the-art food facility is equipped with robotic pick towers, smart routing technologies, and nine miles of conveyor belts. To deliver on FreshDirect’s commitment to sustainability, the new facility is environmentally friendly and highly energy efficient, and additionally enables FreshDirect to transition from cardboard delivery boxes to recyclable bags. There will also be less food waste through a combined approach of innovation and community outreach.

“The launch of the FreshDirect Campus is the culmination of 16 years of learnings that have enabled us to reinvent the grocery industry with customer experience, food quality, and sustainability at its core,” said FreshDirect CEO and Co-Founder, Jason Ackerman. “This marks a pivotal moment for our business, while positioning us for future growth. We can also better serve the community by providing greater access to fresh food and significantly reducing food waste, cardboard use, and energy consumption. We are thrilled to officially be a part of the Bronx community and are very thankful for the local support we’ve received throughout this journey.”

“From the day this project was announced, I have not wavered in my support. We are building a diverse economy in The Bronx, and that economy has to work for everyone. Since Freshdirect first announced their move to The Bronx in February 2012, they have been a good neighbor, and have done everything we have asked of them. They deserve our support in return,” said Bronx Borough President Ruben Diaz Jr.

FreshDirect has made strategic investments in key areas of the new facility to deliver an unrivaled experience. Key initiatives and investments include:

Unlike a traditional grocery store, the FDC has temperature controlled areas designed to best handle and store meat, seafood, produce, deli, bakery, and prepared food items along with a specific freezer room for premium ice cream and refrigerated rooms for bananas, tomatoes, and onions to make sure each item is in optimal food conditions.

FreshDirect believes that quality food starts with quality people. Everyone from the fresh food experts that assign the online produce and seafood ratings daily to the “personal shoppers” that handpick every item, have been selected and trained specifically for their tasks.

The FDC will reduce the amount of handling and increase the overall quality and consistency of the product for customers, while enhancing FreshDirect’s ability to do quality control in real-time.

Every FreshDirect personal shopper works with the same 20-30 fresh products daily so they can become experts in their select products and better maintain the Company’s high-quality standards.

Bringing together the world’s best brands and products, the FDC enables the addition of thousands of new products to FreshDirect’s selection, which will be rolled out in the coming months and will enable customers to discover and try new, relevant, and emerging brands.

The FDC is built to allow FreshDirect to better supply FoodKick, the Company’s on-demand business.

Using the Bronx as its new base of operations will allow FreshDirect and FoodKick to build upon existing local vendor relationships and work with even more local suppliers and food incubators over time.

The FDC’s kitchen expansion will enable the Company to triple kitchen production and refresh its prepared meals offerings seasonally. The move will also allow the Company to hire more culinary experts to their in-house research and development team, which will triple in size.

Making strides in sustainability, the FDC will eliminate its usage of cardboard delivery boxes by moving all deliveries to a 100% recyclable woven bag, saving more than 10 million cardboard boxes annually.

The carts and pallets used at the FDC are specifically designed for new delivery methods and make for easy truck loading and unloading so orders can be delivered faster.

The FDC enables FreshDirect to minimize food waste through a combined approach of technological innovation and community outreach.

FreshDirect has hired more than 1,500 employees from the Bronx since 2014.

The FDC has a cafeteria and employee store that provide employees with healthy food choices.

Personal shoppers work from a stationary pack station where orders come to them, making for a more efficient and ergonomic environment.

The FDC is equivalent to 50 grocery stores, and due to its centralized location, provides a more efficient means to reallocate perishables to FreshDirect’s long-standing partners City Harvest and the Food Bank for New York City in the fight against hunger.

As a top food donor to City Harvest, FreshDirect has donated more than 19 million pounds of nutritious food to date – representing 16 million meals – to help feed New Yorkers in need across the five boroughs.

“When we launched this business 16 years ago, we set out to source the very best fresh food for our customers and that maniacal focus on food quality is still at our core today. We’ve built a world-class fresh food facility that enables us to better execute our farm to fork mission,” said David McInerney, Co-Founder and Chief Food Adventurer at FreshDirect. “Our FreshDirect Campus empowers our in-house team of food experts to source, prepare, handle, and deliver better-tasting, higher-quality food than anyone else.”