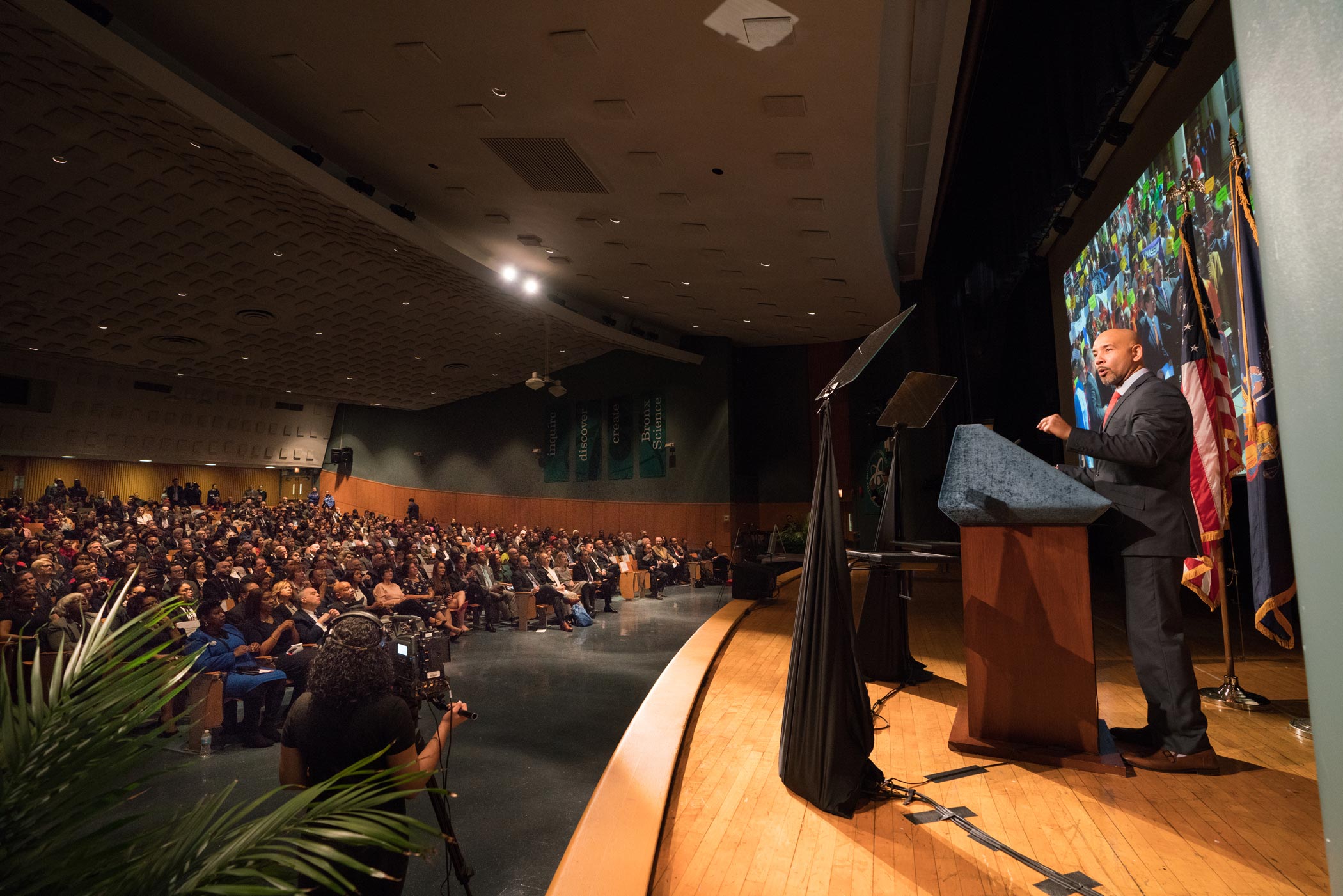 In his speech, Borough President Diaz outlined the successes of his administration, noting that the borough had seen dramatic decreases in unemployment and crime concurrent with a historic influx of private development and new housing units.

“Look at how different things are in this borough today than just a decade ago. We have set the bar for the entire nation on transformative urban renewal and redevelopment. We are the new standard for revitalization,” said Bronx Borough President Ruben Diaz Jr. “The Bronx is rising.”

The full speech can be read at http://on.nyc.gov/2CbVt95.

Since the borough president took office in May 2009 unemployment has been cut by more than half, down to 5.5 percent, and nearly 110,000 more Bronx resident have jobs.  Additionally, the borough has seen more than 21,000 new units of affordable housing constructed during that timeframe.

“We’re keeping people in their homes, building new housing units for a diverse population, and setting the standard for tenant protection for the city,” said Borough President Diaz.

The borough president also discussed a wide variety of issues facing The Bronx and New York City during his speech, including the future of the New York City Housing Authority, criminal justice reform and the opioid crisis, among others.

On NYCHA, Borough President Diaz stated that the agency had not done enough to ensure the safety and well-being its 400,000 residents.

“The New York City Housing Authority is also facing a crisis of confidence. Crime persists. Buildings are dirty. Repairs are late, if they are made at all. And, of course, residents are being left out in the cold. Just when you think it couldn’t get worse, you find out the city has failed to properly inspect apartments for lead paint, putting children at serious risk,” said Borough President Diaz.

The borough president specifically noted NYCHA’s ongoing heat crisis and the agency’s failure to move on an emergency declaration to cut red tape in the procurement process and replace broken boilers faster, and urged Governor Andrew Cuomo to act on behalf of NYCHA’s residents if the city would not.

“We are turning up the heat on NYCHA to act as a responsible landlord, and if they refuse to do so I call on the governor to do it for them,” said Borough President Diaz.

Borough President Diaz also discussed last week’s surprise announcement by the de Blasio administration that they would look to build a new jail on a site in Mott Haven. The borough president decried the lack of community input in the site selection, adding that a failure to consult with local elected officials and other stakeholders could put the entire process in jeopardy.

“Reform efforts to fix our City’s jails are needed,” said Borough President Diaz.  “However, any new site for a jail in this borough must be thoroughly vetted, and the people of The Bronx must have a meaningful say in the selection of any site.”

Borough President Diaz also discussed the opioid crisis that has gripped the nation, as well as its impact on The Bronx.

“Here in The Bronx, addiction is not a novel issue.  We should not accept a national failure to solve urban problems,” said Borough President Diaz. “When they speak of this crisis, are Republicans talking about helping the folks in our communities? This is the gentrification of the opioid epidemic.”

The borough president added that addicts should be connected to treatment programs rather than be dealt with as criminals. He also called for the end of cash bail in New York State, and greater mental health services for those caught up in the system.

“The system should rehabilitate, not debilitate,” said Borough President Diaz.

The borough president also called for greater synergy between the City University of New York and employers. In particular, Borough President Diaz called for the creation of incentive programs such as tax breaks and preferences on city contracts for those companies that hire recent CUNY graduates.

“We will continue to support our CUNY system, as well, as we marry our students’ job skills with the needs of this city. We can create incentive programs that directly link CUNY graduates with jobs,” said Borough President Diaz. “We must build the bridges to success through synergy.”

In closing, Borough President Diaz noted the progress his borough has made since he took office, and promised that The Bronx would continue to set the agenda and lead the way for all of New York City.

“Together, we will ensure our continued success and preserve all the freedoms that make New York City a beacon for the world,” said Borough President Diaz. “The State of the Bronx is strong, and we will continue lead the way for our great City.”