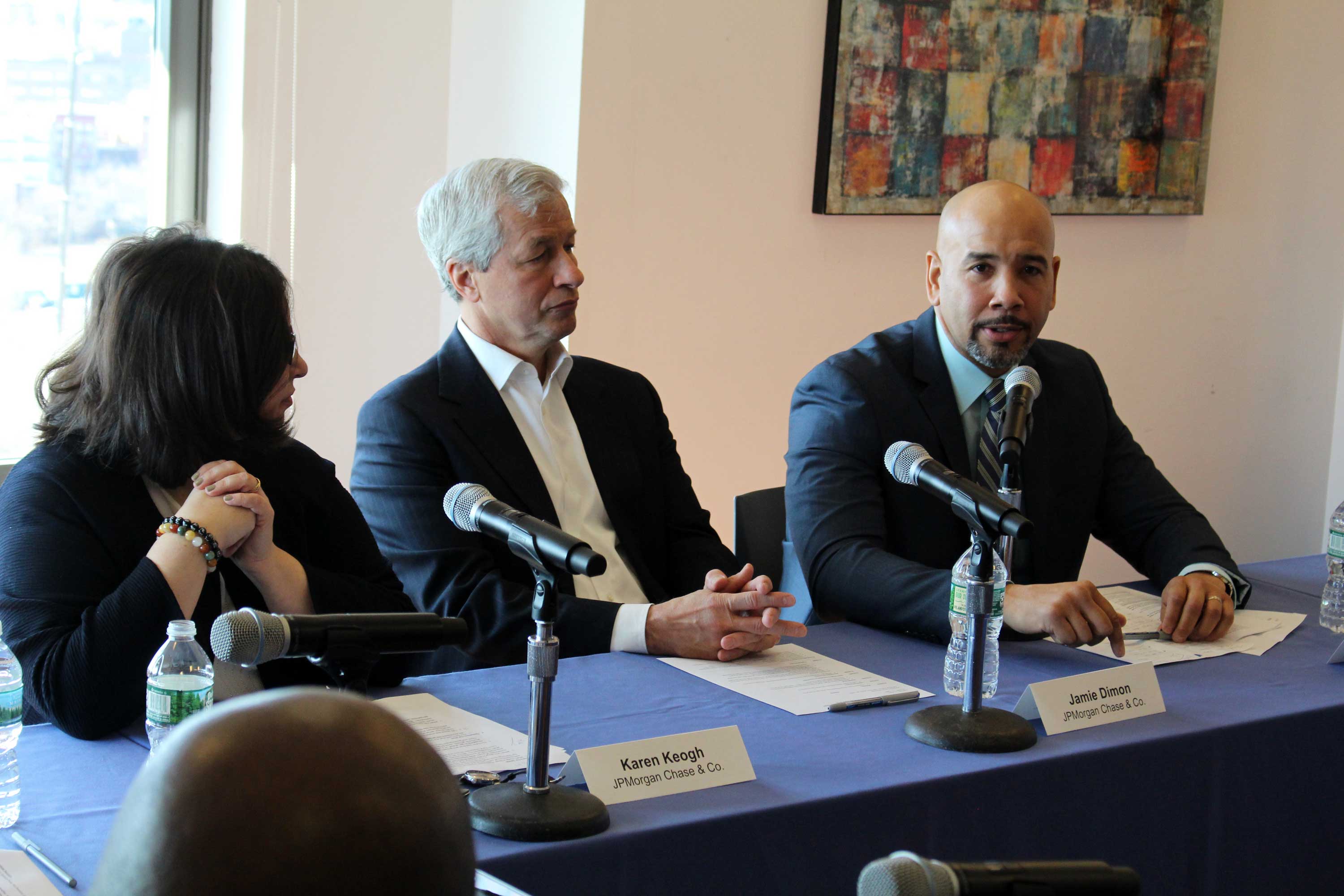 February 13, 2018 (New York) – Building on the success of Detroit’s Entrepreneurs of Color Fund, JPMorgan Chase today announced it will expand the fund’s model and create two new funds to help minority entrepreneurs in San Francisco and the South Bronx. The firm is committing more than $5 million across the two cities to provide minority entrepreneurs with critical access to capital, while also recruiting additional investors to the new funds.

As part of JPMorgan Chase’s $150 million Small Business Forward program to help women, minority and veteran entrepreneurs, the firm will invest $3.1 million in San Francisco and $2 million in the South Bronx, with the goal of helping local minority-owned small business share in the growth of these two cities. The firm recently doubled the size of Small Business Forward from $75 million as part of a $20 billion, five-year U.S. investment that includes increasing the firm’s small business lending commitment and community investments to drive inclusive economic growth.

“Detroit’s Entrepreneurs of Color Fund has made a great impact creating economic opportunity, and now we want to bring this same model to San Francisco and the South Bronx to help more entrepreneurs grow,” said Jamie Dimon, Chairman and CEO, JPMorgan Chase. “These cities are seeing tremendous growth. By expanding this fund, we will help ensure more small businesses thrive and create local jobs.”

Two years ago, JPMorgan Chase, along with W.K. Kellogg Foundation and Detroit Development Fund, created a $6.5 million Entrepreneurs of Color Fund in Detroit to provide minority-owned small businesses with access to capital and technical assistance as part of the firm’s $150 million investment in Detroit’s economic recovery. In December 2017, JPMorgan Chase and partners announced the Detroit fund would triple in size to more than $18 million due to the fund’s initial success, improving economic conditions in the city and strong collaboration between civic, business and nonprofit leadership.

Since its launch, the Detroit fund has lent or approved $4.7 million to 45 minority small businesses, resulting in more than 600 new or preserved jobs. Fifty-three percent of the loans are supporting minority women-owned businesses and nearly three-quarters (70 percent) of the loans have supported small businesses based in Detroit neighborhoods.

As it did in Detroit, JPMorgan Chase is combining its philanthropy and business expertise to help provide underserved entrepreneurs in the South Bronx and San Francisco with access to the capital they need to grow, create jobs and drive local economic growth. Collaboration between community partners and the strong need for access to capital prompted JPMorgan Chase to replicate the Detroit fund and brings its model for impact to these communities.

The new funds will provide underlying capital for community lending partners to make loans and provide technical assistance and personalized servicing. Many entrepreneurs will be in the start-up stage of their business, but the funds will also support existing, legacy businesses—allowing more businesses to stay local despite threats like rising rents and higher operating costs. These entrepreneurs are typically unable to qualify for traditional loans, often due to previous credit challenges, limited financial collateral, short business history or informal businesses practices.

“Creating inclusive growth is a challenge facing cities all over the world, and that’s especially true in places like San Francisco and the South Bronx,” said Peter Scher, Global Head of Corporate Responsibility, JPMorgan Chase. “We want to help more Americans share in the rewards of a growing economy, and with this new fund we will be able to share lessons from our work in Detroit and create meaningful, long-term growth for underserved entrepreneurs.”

Small businesses are key drivers of growth, and that growth is fastest among minority and women entrepreneurs. A 2016 study by the Institute for a Competitive Inner City shows that small businesses in large cities account for a majority of jobs, but that number is even bigger in inner city areas. In Detroit, small businesses accounted for half of jobs within city limits—that number jumps to two-thirds of jobs in Detroit’s inner city neighborhoods. That same report also found that a modest increase in the number of jobs created by existing small businesses could create enough employment opportunities for all currently unemployed inner city residents.

The fund will also work closely with the new Chase Center in Mission Bay to generate business opportunities and local economic growth.

“Equal access to capital is a critical tool in our efforts to create opportunity and advance shared prosperity for all San Franciscans,” said Todd Rufo, Director of the San Francisco Office of Economic and Workforce Development. “It is especially challenging for women and minority entrepreneurs to secure access to loans and other forms of assistance. The Entrepreneurs of Color Fund helps address this issue by partnering with local organizations and complementing the City’s programming aimed at furthering equity in underserved communities.”

“Working Solutions is thrilled to be partnering with JPMorgan Chase and our fellow nonprofits ICA Fund Good Jobs and Pacific Community Ventures to launch the Entrepreneurs of Color Fund in San Francisco,” said Sara Razavi, Interim CEO and former COO of Working Solutions. “Through this collaborative approach, we will provide loans and investments along a continuum of capital – with loans starting from $5,000 – to reduce the chronic undercapitalization faced by entrepreneurs of color in our community.  Our goal is to meet entrepreneurs of color ‘where they are’ with tailored resources and consulting to create sustainable businesses, good local jobs, and thriving, inclusive neighborhoods in San Francisco.”

In San Francisco, JPMorgan Chase has increased the number of local branches, added employees and committed $25 million over three years for Bay Area projects as part of the development of the Chase Centerdrive inclusive growth through skills training, the development of affordable housing and small business investment.

In the South Bronx, 80 percent of small businesses are owned by entrepreneurs of color, and many struggle with being able to afford the space and resources they need to run and grow their businesses.

JPMorgan Chase is partnering with Excelsior Growth Fund and Accion East, two recent winners of JPMorgan Chase’s PRO Neighborhoods competition. The PRO Neighborhoods investment facilitated the development of a loan management infrastructure that the collaborative will leverage to create tailored solutions, including flexible small business loan products. The Entrepreneurs of Color Fund will also offer technical assistance and education to businesses. CommonWise Education, a network of grassroots local leaders, labor leaders, and anchor institutions whose mission is to end generational poverty in the Bronx will help to inform the design of the fund.

“The Bronx has seen an ongoing revival over the past decade, thanks in part to strong partnerships between our business community, non-profits and the public sector,” said Bronx Borough President Ruben Diaz Jr. “Today’s announcement that JPMorgan Chase will launch an ‘Entrepreneurs of Color’ Fund in the South Bronx is a welcome one, as it will help provide minority and women-owned business enterprises with the resources they need to grow and thrive. I especially want to thank Jamie Dimon for his commitment to the continued success of The Bronx, and his welcome investment in the health and well-being of our critically important minority-owned businesses.”

“When everyone – regardless of race, gender or ethnicity – has access to resources they need to become economically empowered, cities and the country as a whole will reap the benefits of their success. I applaud JPMorgan Chase for expanding resources to empower minority entrepreneurs in two major cities, including New York City,” said Jonnel Doris, Senior Advisor and Director of the NYC Mayor’s Office of Minority and Women-owned Business Enterprises (M/WBEs). “These resources will help break historic barriers that have hindered the economic success of these businesses and will continue to make New York City the fairest big city in America.”

“We applaud JPMorgan Chase for their leadership in driving and funding this initiative, and bringing together partners that are well-equipped to create lasting change for businesses in the South Bronx,” said Steven Cohen, President of Excelsior Growth Fund. “As an alternative nonprofit lender and Community Development Financial Institution, Excelsior Growth Fund has a mission to provide capital to underserved small businesses, and thanks to this initiative there is now increased support available for entrepreneurs of color in the South Bronx.”

JPMorgan Chase is the largest bank in the South Bronx, with thousands of employees living there and hundreds working in the borough. Over the past few years, the firm has invested more than $17 million in small business growth, skills training for young people and the development of affordable housing.

JPMorgan Chase & Co. (NYSE: JPM) is a leading global financial services firm with assets of $2.5 trillion and operations worldwide. The Firm is a leader in investment banking, financial services for consumers and small businesses, commercial banking, financial transaction processing, and asset management. A component of the Dow Jones Industrial Average, JPMorgan Chase & Co. serves millions of customers in the United States and many of the world’s most prominent corporate, institutional and government clients under its J.P. Morgan and Chase brands. Information about JPMorgan Chase & Co. is available at www.jpmorganchase.com.

Excelsior Growth Fund (EGF) helps small businesses grow by providing streamlined access to business loans and advisory services. EGF’s signature product, the EGF SmartLoan™, provides up to $100,000 in fast, transparent, and affordable financing through a secure online platform. Larger loans up to $500,000 are also available. EGF is a nonprofit organization and is certified by U.S. Department of Treasury as a Community Development Financial Institution (CDFI). Learn more at www.excelsiorgrowthfund.org. As an affiliate of New York Business Development Corporation (www.nybdc.com) and The 504 Company (www.the504company.com), EGF can also facilitate access to a full suite of alternative financing products.

Working Solutions is a Community Development Financial Institution (CDFI) with a mission to provide affordable microloans, customized business consulting, and community connections to start-up and early-stage businesses seeking loans from $5,000-$50,000. Working Solutions prioritizes serving disadvantaged entrepreneurs with limited or no access to traditional financing, especially low- and moderate-income individuals, women, and people of color. Since the launch of Working Solutions’ lending program in 2005, Working Solutions has made more than 500 microloans totaling over $15 million with a 96 percent repayment rate to businesses that have created or retained at least 2,600 jobs in the local community. More information is available at www.workingsolutions.org.