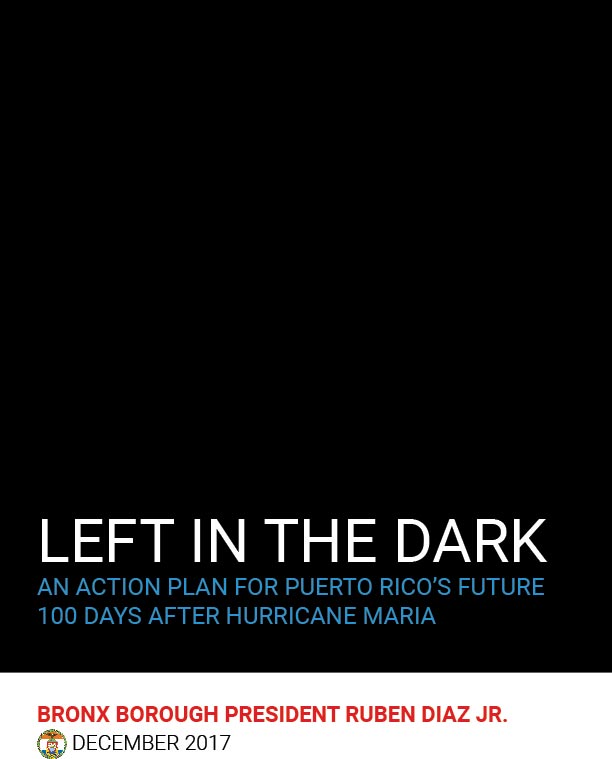 A new report, titled “Left In The Dark” Outlines More than 25 steps the City, State and Federal Governments can take to assist Puerto Rico and its residents in the short and long term

Today, Bronx Borough President Ruben Diaz Jr. issued a new report, “Left In The Dark: An Action Plan for Puerto Rico’s Future 100 Days After Hurricane Maria,” outlining an action plan for the short and long term recovery of the island of Puerto Rico. The report was released to mark the grim occasion of the 100th day since Hurricane Maria struck the island, and includes more than 25 recommendations that New York City, New York State and the federal government should enact to assist the ongoing recovery of Puerto Rico.

“The Trump Administration and the federal government are failing Puerto Rico,” said Bronx Borough President Ruben Diaz Jr. “For 100 days the people of the island—nearly 3.5 million American citizens—have lacked power, adequate food and medical supplies, and other critical necessities that most of us take for granted. Our families and friends, our fellow Americans, need and deserve our help. Given the refusal of President Trump to step up for Puerto Rico, it is up to others to craft the agenda for the island’s recovery.”

Chief among the report’s recommendations is the creation of a new oversight panel to coordinate relief efforts between New York City, New York State and the federal government. This panel would be comprised of elected officials, the business and non-profit leaders, infrastructure experts, healthcare representatives and others, and would guide relief efforts in both the short and long term, in order to best address the needs to the people of Puerto Rico.

In addition the report calls for New York City to open offices in Puerto Rico to provide family reunification and other services, “Sister City” and “Adopt A Town” partnership programs to help guide local aid, the creation of a volunteer tourism program in New York State to guide New Yorkers to the Island to assist in relief projects during their free time, the repeal of the Jones Act and the development of an emergency preparedness registry for Puerto Rico to better prepare for the next disaster, among other proposals.

“So many people are doing everything they can to assist the recovery of Puerto Rico in the wake of Hurricane Maria. Governor Cuomo’s administration has done more for the Island than any local government entity in this nation, and individuals and families all over the nation have done what they can. These efforts are certainly welcome, and I know firsthand from my own friends and family that the people of Puerto Rico appreciate our support. However, the Island needs much, much more assistance,” said Borough President Diaz. “I look forward to working with leaders across the nation to implement this action plan for Puerto Rico and to help the Island and its people recover from the ongoing aftermath of this disaster.”

“Left In The Dark: An Action Plan for Puerto Rico’s Future 100 Days After Hurricane Maria,” can be read at http://on.nyc.gov/2CdEH9d.