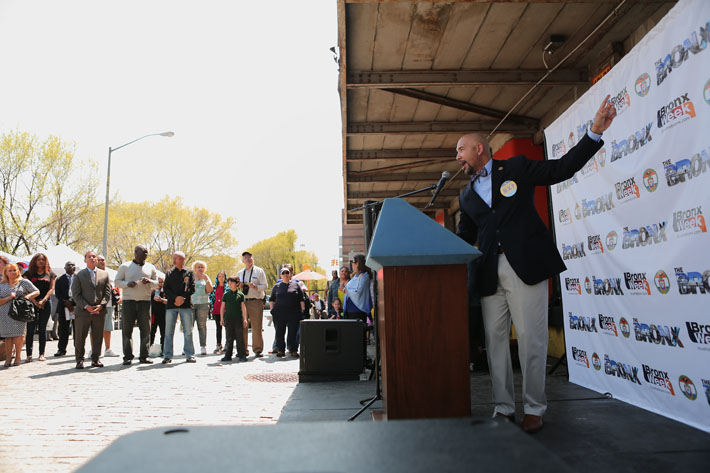 Bronx Borough President Ruben Diaz Jr. kicks off Bronx Week 2015 with a food, music and art festival at the Bronx General Post Office, co-hosted by developer Youngwoo & Associates, on Sunday, May 3, 2015. More information on Bronx Week 2015 can be found at ilovethebronx.com.

“I always look forward to this time of the year, when we celebrate everything that is great about The Bronx,” said Bronx Borough President Ruben Diaz Jr. “We kick things off with this great street fair on Sunday, holding 10 days’ worth of amazing and fun events for the whole family throughout the borough, all culminating with the Walk of Fame inductions and parade.”

“Bronx Week is the opportunity to showcase the Best of The Bronx,” said Bronx Tourism Council Executive Director Olga Luz Tirado. “There is a lot to celebrate — tourism, overall, is up in the borough. Our attractions are reporting a substantial increase in visitors. We are enjoying increased positive coverage from media. It’s a great time to be in The Bronx right now.”

“Bronx Week is a time to celebrate our businesses, big and small, that provide much needed jobs to our community as well as a time to honor veterans, seniors, youth, volunteers and our hometown greats,” said Marlene Cintron, president of The Bronx Overall Economic Development Corporation.

“As a new member to the community, we are excited to be a part of our first Bronx Week and to host the first event with Borough President Ruben Diaz at this iconic site,” said Christine Nebiar, marketing director for Youngwoo & Associates, LLC, who is sponsoring the kick-off event alongside The Bristol Group. “The Bronx has so much to celebrate and we are thrilled to invite New Yorkers to experience the borough at its best. The historic Bronx Post office will transform into a center of culture, community, and commerce and we hope to feature the great talents in food, art, music, and business.”

This year, four new individuals will be inducted to the Bronx Walk of Fame. They are actor and activist Malik Yoba; National Basketball Association (NBA) Hall of Famer Dolph Schayes; and actress, author and television commentator Stacey Dash. Longtime borough business leader, philanthropist and the founder of Delicioso Coco Helado, Alfredo Thiebaud will also be posthumously inducted in to the Bronx Walk of Fame.

Bronx Week 2015 is made possible thanks to the support of the Montefiore Medical Center, the principal sponsors of this year’s events.

“Montefiore is proud to support Bronx Week,” said Steven M. Safyer, M.D., president and CEO of Montefiore Health System. “Bronx Week is an opportunity for us to celebrate our strengths and the progress we are making to improve our communities. It’s a chance to highlight how healthcare providers like Montefiore, community based organizations and elected officials are joining forces to ensure Bronx residents have the tools and access they need for optimal health and wellness. Working together, the future of our borough is bright.”