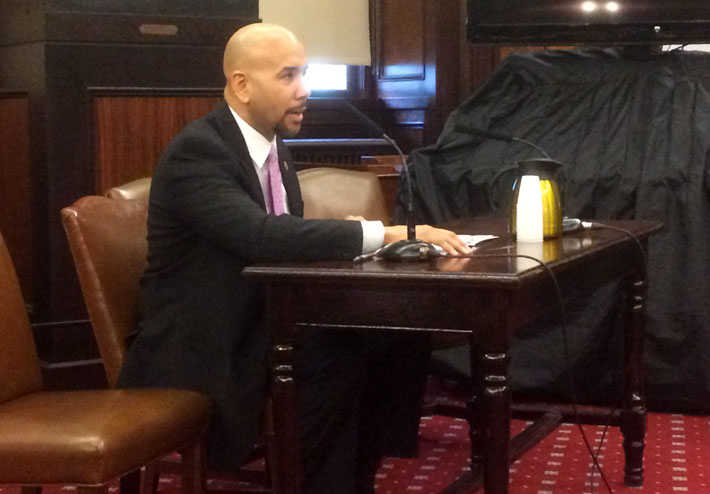 Delivered Before a Joint Hearing of the Consumer Affairs & Health
Committees of the City Council
May 1, 2015

I am here today to testify in favor of a package of legislation, introduced at my behest by my friend, Council Member Rafael Espinal, concerning the regulation of cosmetology businesses in New York City.

Our legislation would accomplish three things. First, we would ask for a “home rule” message to allow the city to create a system of letter grades for cosmetology businesses—such as hair and nail salons, manicure and pedicure shops and other similar establishments—based on the existing restaurant letter grading system already in effect in this city.

Second, we would create a “Customers’ Bill of Rights” for such establishments, which would outline exactly what a customer should expect from a salon during a visit. Third, we are calling on the State to expand training options available for licensed cosmetology professionals.

Taken together, along with legislation introduced by Public Advocate Letitia James to regulate air quality within salons, these bills take a major first step towards ensuring that the health and safety of both customers and employees in these establishments.

This is an important health issue. I’m sure there are many people in this room today, men and women alike, who have been getting their manicure or pedicure on a regular basis. I’m not ashamed to say that I’ve gotten my nails done before.

If you regularly visit a salon, then you know that some of them can be unsanitary. Last summer, a relative of mine was forced into the emergency room after a pedicure led to a serious infection. When I speak to people about this issue, every one—every single person—has their own horror story about a friend, a family member, or even themselves, who visited a salon to look good, and ended up with a serious health issue.

We have seen numerous cases where not only infections but other illnesses, like staph and hepatitis, are passed by a manicure or a pedicure. A 2013 report by Sara A. Walsh, titled “Beyond the Polish: An Examination of Hazardous Conditions in Nail Salons and Potential Solutions for the Industry in New York City,” noted that unsanitary salons can lead to a variety of hazards, including staph or MRSA, hepatitis, fungus and other infections.

Doesn’t the evidence demand more oversight? I think so.

This is an important public health issue, and we are making sure that all stakeholders, including businesses, are involved in crafting this proposal. Already, we have partnered with the New York Hispanic Cosmetology and Beauty Chamber of Commerce to give a voice to the industry, and we are partnering with business and industry organizations across the city to make this legislation work for everyone.

We are eager to work with any and all trade and business associations to hear their concerns about this legislation, and to develop ways to make this legislation work for the cosmetology industry while also protecting the health of the public.

And this major public health program will be cost effective as well. My office has asked the Independent Budget Office to score the potential price tag of a new system of inspection for cosmetology businesses. At the high end, the IBO has suggested that the twice yearly inspection of every single cosmetology business in the five boroughs would cost just $7.2 million annually. In the scheme of our city’s budget this is very little, and we cannot and should not put a price tag on the health and well-being of our city and its residents.

In closing, this is common sense legislation that addresses a real public health issue in our city. I am hopeful that this year, in partnership with my colleagues in government and responsible business owners, we will create cleaner, safer and healthier environment for customers and employees alike in our beauty spas and nail salons.