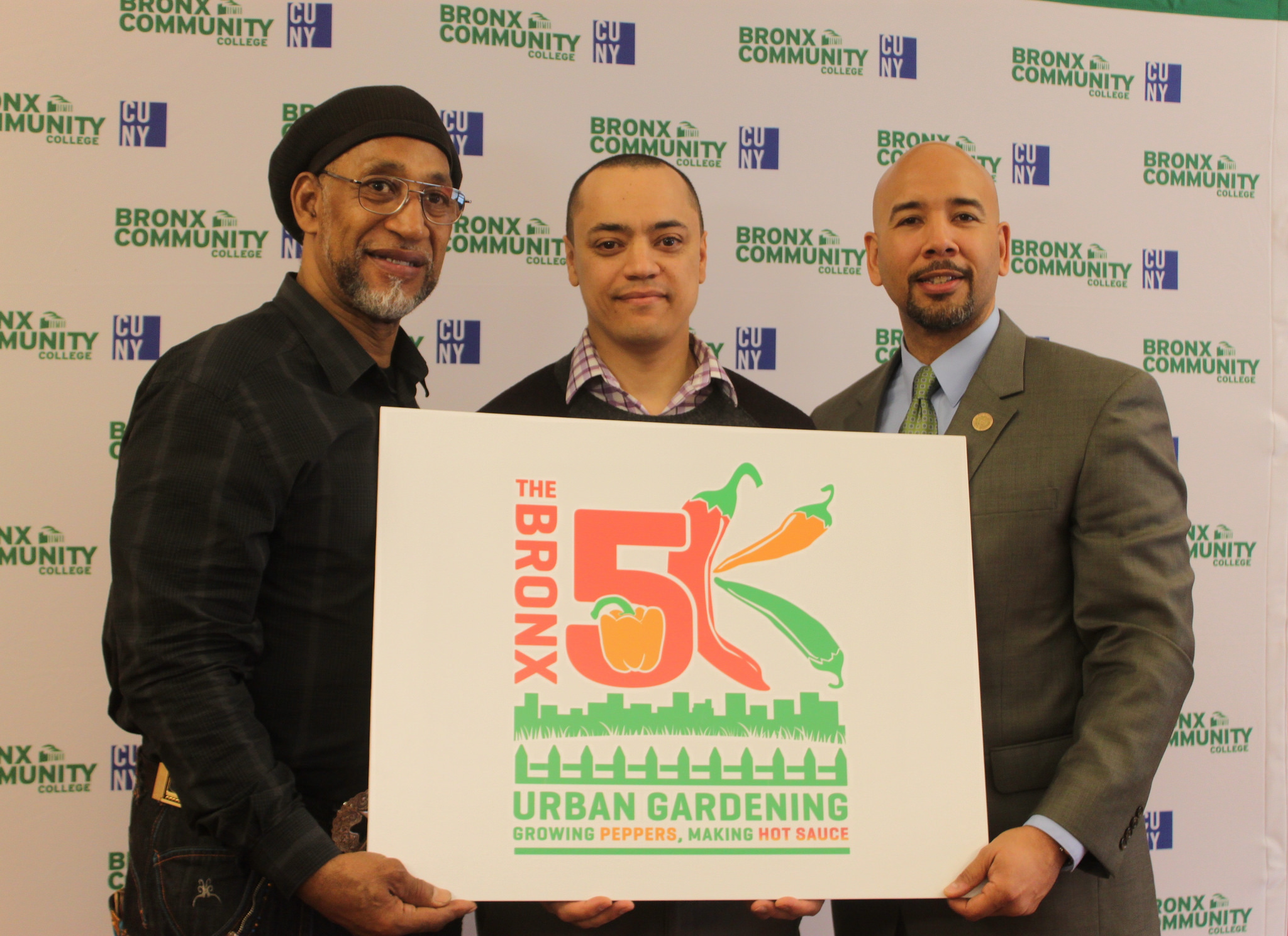 April 6, 2015 (Bronx, NY) Today, Small Axe Peppers and nonprofit GrowNYC announced the winner of the “Bronx 5K” logo design competition, along with Bronx Borough President Ruben Diaz Jr. at Bronx Community College.  The winning logo will brand our “Bronx 5K” pepper growing challenge through print and online marketing and on signage to identify serrano peppers growing in local community gardens, public spaces and urban farms. Our goal is to grow and source at least 5,000 (or 5K) pounds of peppers from The Bronx for our delicious The Bronx Greenmarket Hot Sauce.

The winning logo was designed by Gabriel Ruiz of Throggs Neck, and can be viewed here: http://bit.ly/1ciWnzH.

The panel of judges for the event included:

The panel selected from nearly one hundred submissions. Bronxites were challenged to create a sign that visibly represents The Bronx, urban gardening or other unique aspects of the borough; the top three finalists were awarded cash prizes, including a $500 1st place prize.

“This product not only helps our borough’s community gardens, it tastes great and represents our borough well. Bronx Hot Sauce is a great addition to our borough’s culinary culture, and I cannot wait to see some of the great artistic expressions of the flavors of our borough that are showcased by this contest,” said Bronx Borough President Ruben Diaz Jr. “The Bronx has a tremendous arts culture, and it is great to see food and art coming together for this incredible contest.”

“Twenty community gardeners and counting have already stepped up to participate in the Bronx 5K pepper pledge. This challenge is a fun way to get everyone in the borough involved in a great product made by the Bronx, for the Bronx,” said Marcel Van Ooyen, Executive Director of GrowNYC. “GrowNYC is excited to distribute peppers to Bronx gardening and community groups at our upcoming plant sale at College Avenue Garden next month.”

“The Bronx Greenmarket Hot Sauce launched last year and continues to grow in popularity. That you can enjoy its outstanding flavor while supporting so many local community gardens is a concept that appeals to all New Yorkers,” said John A. Crotty of Small Axe Peppers.  “Now when people walk by these beautiful gardens, they’ll be able to clearly identify the origins of the hot sauce.”
“I really enjoyed being part of the selection panel for The Bronx Hot Sauce “Bronx 5K” competition. It’s such an amazing initiative that’s bringing together people of all ages to do something really great within their communities,” said Alejandra Ramos, one of the contest’s judges. It’s connecting them to the land, and showing them how working together can create something really wonderful. The submitted artwork showed just how much talent and creativity there is in the Bronx–from young children to more established professionals. I’m also especially excited to try The Bronx Hot Sauce in my recipes!”

The Bronx Hot Sauce is a partnership between GrowNYC and Small Axe Peppers. Bronx-educated chef King Phojanakong takes locally grown serrano peppers to create a fresh, all-natural and delicious sauce. This collaboration was forged from the shared belief that The Bronx is a wonderful place capable of producing wonderful things. The sauce is no exception. You can find the sauce at GrowNYC’s  Greenmarkets and Youthmarkets  throughout the city and at various retailers and online at www.bronxhotsauce.com.

In the spring of 2014, Small Axe donated 3,500 serrano pepper plants to GrowNYC. The plants were distributed to community gardens throughout the Bronx that GrowNYC supports. We then offered to buy back the peppers for a premium price at harvest time in the fall. This buy-back model keeps production local, while supporting community gardening projects in the Bronx.

More information on the Bronx Greenmarket Hot Sauce can be found at http://bronxhotsauce.com/.