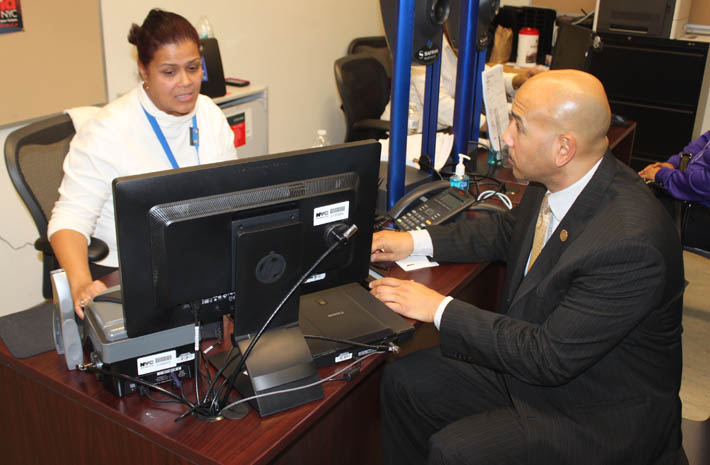 Bronx Borough President Ruben Diaz Jr. signs up for his own “IDNYC” municipal identification card at the Bronx Library Center at its launch on Monday, January 12, 2015.

“The people of The Bronx can now represent their borough and their city with great pride by signing up for the new IDNYC municipal identification card, which launches today.

“The program, which will not only provide people with a legal identification recognized as a valid form of ID, but it will also help the 1.4 million residents of The Bronx gain access to city programs such as discounts on prescription drugs, libraries across three boroughs, movie tickets, fitness and health centers as well as free memberships to some of our borough’s amazing cultural institutions such as the Bronx Museum of the Arts, the Bronx Zoo and the New York Botanical Garden.

“I congratulate Mayor de Blasio, Speaker Mark-Viverito and the entire City Council on the implementation of this incredible, groundbreaking program, and encourage all New Yorkers to sign up, just like I did today. If you live in New York City, show that you’re a real New Yorker and sign up for IDNYC,” said Bronx Borough President Ruben Diaz Jr.

For more information about IDNYC and how to sign up, visit: http://on.nyc.gov/1CTMkvz.