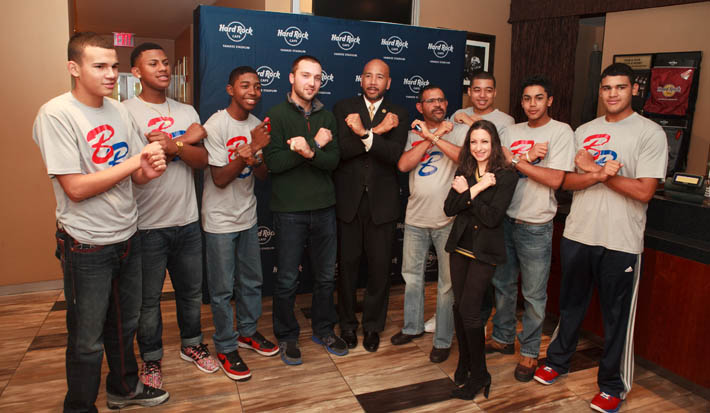 Bronx, NY– On Sunday, November 23rd, Bronx Borough President Ruben Diaz Jr. and AT&T’s New York State President Marissa Shorenstein hosted a celebration for the Little League teams that participated in this year’s Borough President’s Cup. The breakfast celebration took place at the Hard Rock Café at Yankee Stadium and was attended by players, their parents and their coaches.

During the celebration, each of the Little League teams was recognized for their hard work in school and on the field, and the winner of the championship game and Cup overall, the Bronx Bombers, was congratulated. Shorenstein and Borough President Diaz also presented each team with a gift card to Modell’s Sporting Goods to help the teams pay for equipment for the upcoming Little League season. These equipment grants were sponsored by AT&T.

In order to compete in the Borough President’s Cup, players on each Little League team were required to meet a set of prerequisites unrelated to their performance on the field, including a B-average in school, 90 percent or greater school attendance and a demonstrated commitment to community service.

“This event continues to make me proud every year. We are giving good kids a chance to play baseball at the highest levels while also helping their league’s purchase new equipment, and I am incredibly grateful to Marissa Shorenstein and everyone at AT&T for their continued support of the Borough President’s Cup,” said Bronx Borough President Ruben Diaz Jr.

“AT&T is proud to support such an amazing tournament that encourages kids to participate in competitive team-building sports, while also encouraging strong academic performance and a commitment to community service,” said Marissa Shorenstein, New York State President, AT&T. “These kids truly demonstrate what it means to be student-athletes, and are testament to what hard work, both on and off the field, can bring. I want to thank Borough President Ruben Diaz Jr. for holding this great event every year and we look forward supporting it in the years to come.”

In August, Shorenstein and Borough President Diaz presented the trophy to Bronx Bombers after they won the Borough President’s Cup championship game. The game was held at Yankee Stadium, and family and friends of the teams were able to attend the game free of charge.