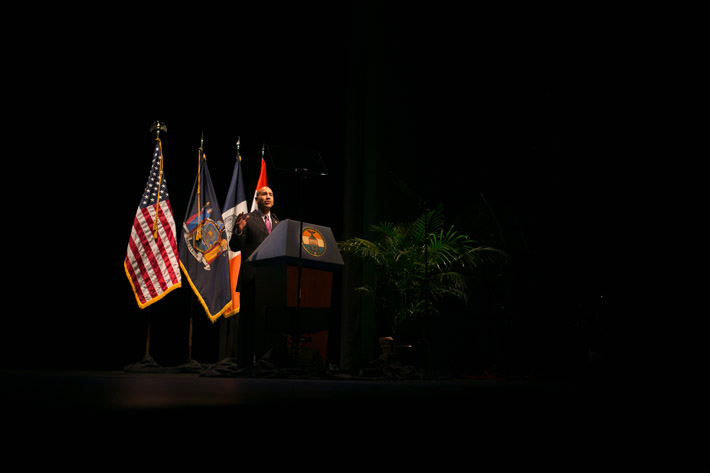 Today, before a packed house at Hostos Community College, Bronx Borough President Ruben Diaz Jr. delivered his fifth annual “State of the Borough” address, highlighting his continued agenda for a “New Bronx” as well as the growth of the borough since 2009.

“Over the past four years, The Bronx has taken major steps forward in all categories, from job creation to crime reduction and everywhere in between,” said Bronx Borough President Ruben Diaz Jr. “During the next four years we will continue to implement our aggressive agenda, and bring responsible development to every corner of the borough. That is the ‘New Bronx.’”

Since 2009, The Bronx has seen $5.768 billion in total development, the creation of more than 13,000 in new units of housing and more than 14,000 new jobs created. Borough President Diaz highlighted several specific projects, including the new retail mall at Bay Plaza, the relocation of FreshDirect to the Harlem Rail Yards and the forthcoming golf course at Ferry Point Park.

Borough President Diaz also highlighted the redevelopment of the Kingsbridge Armory into the Kingsbridge National Ice Center, a project that will bring the greatest ice sports complex in the United States to the Northwest Bronx.

The southern Grand Concourse was also discussed at length, as Borough President Diaz called on the city to issue a new request for proposals for the P.S. 31 site, and to continue to explore whether or not the existing building could be saved.

“It is an absolute disgrace that the City allowed P.S. 31, one of the most iconic school buildings in our city and my own alma mater, to fall into such disrepair that it is scheduled to be torn down,” said Borough President Diaz. “With that said, it is time for innovation. The city must issue a new RFP for the P.S. 31 site. This RFP should examine whether or not the building can be saved, and should also explore a wide variety of uses for the site in order to stimulate street life and blend in with the neighborhood.”
Borough President Diaz also demanded that the United States Postal Service involve the people of The Bronx in the sale of the Bronx General Post Office, and to stop conducting this important business without community input.
“We cannot allow Washington bureaucrats to simply sell one of our most cherished assets to the highest bidder. This is a public asset, and its liquidation cannot be carried out behind closed doors,” said Borough President Diaz.

During his speech, Borough President Diaz also discussed the continued decrease The Bronx has seen regarding crime statistics, noting that the borough is safer than ever. In 2013 the borough’s murder rate dropped 27 percent, shooting incidents fell 25 percent and shooting victims were down 30 percent.

Noting that The Bronx is safer than many major cities, Borough President Diaz called on his fellow Bronxites to continue their work to change the outdated narrative of The Bronx, and focus on the story of the “New Bronx.”

“But we have to rewrite outdated narratives,” said Borough President Diaz. “We have to think differently. If a politician in Paris decides to use our hometown to make a cheap political point, or a tour operator twists facts to make a quick buck, we will set the record straight. That is the ‘New Bronx.’”

Borough President Diaz also highlighted his support for new transit projects in The Bronx, including ferry service in Soundview and the expansion of Metro North service to the East Bronx. That plan, which would bring new stations to Co-op City, Morris Park, Parkchester and Hunts Point, is his administration’s highest priority, said Borough President Diaz.

“Let me be crystal clear,” said Borough President Diaz, “nothing is more important than making this long held vision a reality.”

The borough president closed by noting that 2014 is the centennial of Bronx County, using the occasion to discuss the history of the borough, it’s continued redevelopment and rebranding, and how the “New Bronx” can only become a reality through shared effort and sacrifice.

“Over the next four years, we will go even further,” said Borough President Diaz. “We will build on this strong foundation, so that 100 years from now, when our successors observe the bicentennial of this county, they will look back at our work and see it as a watershed moment.”

Borough President Diaz added, “They will look back and see a time when the people of this borough—regardless of race, gender, creed, sexual orientation—came together with a common cause, a common dream, and worked as ‘One Bronx’ to develop the ‘New Bronx.’ Our Bronx.

A complete copy of Borough President Diaz’s 2014 “State of the Borough” can be found at http://on.nyc.gov/1fAgbsu.

The video that accompanied the speech can be watched here: http://youtu.be/Z8zj7_0n6X4.