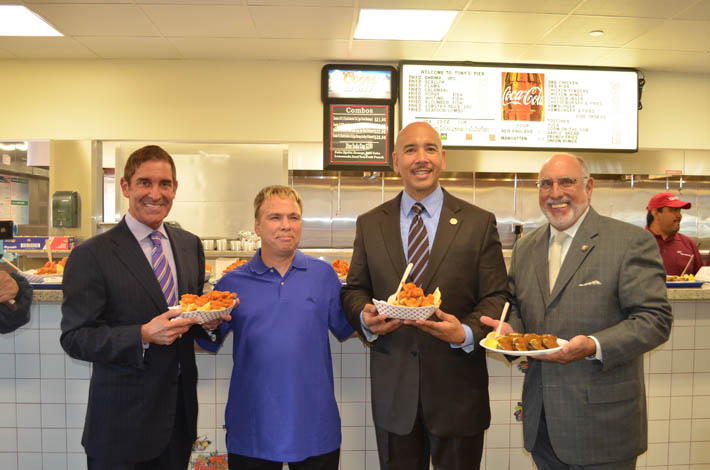 Standing at the far end of City Island, elected officials, members of the City Island business community and the owners of Tony’s Pier, came together to celebrate its re-opening a year after a fire consumed the entire restaurant during the height of Superstorm Sandy.

At the press conference, Senator Jeff Klein, joined by Bronx Borough President Ruben Diaz Jr., Assemblyman Mike Benedetto and members of the City Island Chamber of Commerce highlighted the progress made following Superstorm Sandy, while noting there is more work to be done.

Directly following the storm, Senator Klein’s office met with the owners of Tony’s Pier Restaurant and helped the owners obtain a building permit, expedited their electrical and gas work, ensured speedy review of building plans by the Department of Environmental Protection and worked with the State Liquor Authority and Community Board to obtain a license to serve alcohol.

Senator Jeff Klein (D-Bronx/Westchester) said,  “Exactly one year ago, Tony’s Pier caught fire in the heart of Superstorm Sandy. As flames consumed the restaurant, decades of hard work and history were at stake. The day after the storm, I saw the damage Sandy had caused and vowed to do everything I could to get our local businesses and residents back on their feet. In the past year, we worked hard to help rebuild Tony’s Pier – from expediting building permits to getting the lights turned on, and all that comes in between, my office worked with the owners and planners every step of the day. Today isn’t only a time to reflect on the hardships Sandy caused. It is also a day to celebrate the hard work and resilience of our community.”

“One year ago, Superstorm Sandy devastated this beloved Bronx business. But Tony’s Pier is back, stronger than ever, and I am proud to be here today for their reopening. We have much to celebrate in our borough, and the return of Tony’s Pier is a moment for the entire Bronx to be thankful for the dedication of this business to our borough and their commitment to reopening, bigger and better than ever,” said Bronx Borough President Ruben Diaz Jr.

Assemblymen Michael Benedetto (D-Bronx) said, “It’s fitting that Tony’s Pier is reopening a year after the tragedy of Superstorm Sandy. It’s a tribute to the determination and the resiliency of the human spirit.”

“I am thrilled to have this family-owned small business back on its feet in record time, restoring 60 jobs to City Island in the process,” said Marlene Cintron, president of the Bronx Overall Economic Development Corporation.

Tony’s Pier Co-owner Anthony Palumbo said: “One year ago today, we saw my family’s restaurant, Tony’s Pier, destroyed in flames. Thanks in no small part to the hard work of our elected officials, especially Senator Klein and the Bronx Borough President Ruben Diaz Jr., we have been able to commemorate Sandy’s anniversary with the re-opening of our restaurant. I look forward to continuing our tradition of serving seafood on City Island for many years to come.”