The BronX Marks the Spot with Tour de Bronx 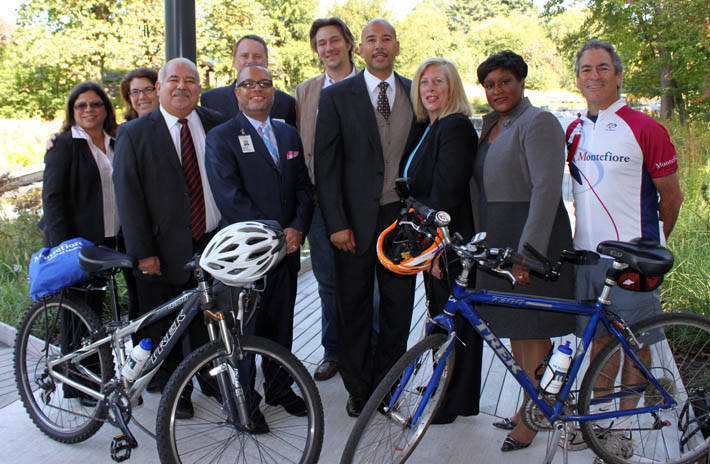 Thousands come from around the country and around the world
to Xercise, Xplore and Xperience The Bronx

Sponsored by the Montefiore Medical Center, St. Barnabas Hospital and the Bronx Lebanon Medical Center, the “Tour de Bronx” traditionally brings together nearly 6,000 bicyclists from around the world.

“The ‘Tour de Bronx’ is a wonderful event, and each year I am always excited to join my fellow Bronxites and thousands of visitors from around the city, nation and the world to ride and see all the great things The Bronx has to offer. Riding a bike around our borough is the healthiest way to see the best of the Bronx, and I am delighted to hear the positive feedback from visitors each year when they participate in the ‘Tour de Bronx.’ I invite everyone to join me again this year to tour our beautiful borough,” said Bronx Borough President Ruben Diaz Jr.

“This great event shows Bronx residents that biking is not only a fun and healthy way to get around the borough. It’s a viable transport option,” says Transportation Alternatives’ Executive Director Paul Steely White.
To further prove that The Bronx is fast becoming a destination, last year’s event welcomed registrants from all over the United States, as well as Europe, South America and even Asia. “Given the amount of positive coverage we’ve been enjoying in national and international media, we expect to see an increase in visitors participating in this event,” stated Olga Luz Tirado, Executive Director of The Bronx Tourism Council. “We are anxious to show off our borough to the rest of the world.”

“The New York Botanical Garden looks forward to welcoming the Tour de Bronx cyclists to nature’s showplace, dressed in its finest fall colors” said Aaron Bouska, Associate Vice President for Government and Community Relations at the New York Botanical Garden. “Not only do cyclists get to see the best of the Bronx on October 27, but they do so in a healthy and sustainable manner – values we share and promote every day at the Garden.  Congratulations to Bronx Borough President for his leadership in this endeavor.”

“For the past five years, Montefiore has supported Tour de Bronx as a way to promote healthy living and wellness in our community while celebrating the historic neighborhoods and beautiful greenways of the Bronx,” said Steven M. Safyer, president and CEO, Montefiore Medical Center.  “Montefiore is committed to improving the health of the community we serve and we are proud to sponsor this borough-wide biking event.”

The event offers both a 25- and 40-mile course, each of which winds through dozens of beautiful Bronx neighborhoods, historic districts, parks, waterfront, Greenway paths and more. Both routes culminate at the New York Botanical Garden for end-of-ride pizza, refreshments and a music festival.