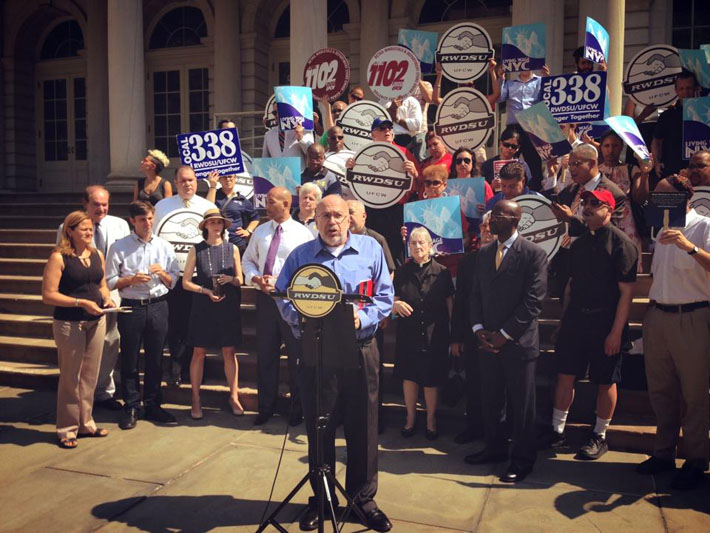 The legislation went into effect in late September of 2012, and the report closely examines new economic development projects that have received $1 million or more in taxpayer subsidies since then. $1 million is the amount of taxpayer support that triggers the living wage requirement, according to the terms of the legislation. The living wage rate is currently set at $10.20 an hour with benefits or $11.75 an hour without benefits.

Developers and companies are as eager as ever to do business with the city, the report finds, and data from the IDA shows that more 12,000 jobs are to be created on a range of new economic development projects covered by the living wage requirement. The New York City Industrial Development Agency (IDA), the agency directly responsible for assisting economic development projects with taxpayer support, has been operating at full capacity, with no change in the number of applications for subsidies.

“With the alarming growth of low-wage jobs, a record number of working New Yorkers live in poverty today. The report shows the living wage legislation will help reverse that disturbing trend. By setting a higher standard for new jobs created with public resources, city government will ensure greater fairness and equity in economic development while boosting wages for struggling households. We must continue on this path,” said Stuart Appelbaum, President of the Retail, Wholesale and Department Store Union (RWDSU), which built and led the citywide campaign for the living wage legislation.

“Residents of the Bronx and the rest of the city should celebrate the good news offered in this report today. The living wage campaign was born in the Bronx, and I’m proud that the living wage legislation we fought so hard to pass will help improve the lives of many working families. We will build on this victory to make our city’s economy stronger and fairer. We will continue to fight for economic justice,” said Bronx Borough President Ruben Diaz Jr.

"One of my most important responsibilities as speaker of the city council has been to ensure government does all it can to keep and create jobs in New York and to make sure those jobs provide people with the resources they need to support their families. Passing the living wage law was a significant step forward in this effort–now companies who receive substantial subsidies from the city of New York for economic development have to pay at least $10.20 an hour, indexed to inflation. Critics said this would stifle economic development:  well, nine months in, deals are still being struck by the City’s Economic Development Corporation at the same rate as before, but now we have ensured that the hundreds of millions of dollars spent on economic development will be used to create and retain jobs that pay a living wage.  Over time, tens of thousands of jobs will be covered by this law, making it the most impactful living wage law in the nation," said Council Speaker Christine C. Quinn.

“I am delighted that the living wage law has gone into effect.  I believe it will have a profound and positive effect on many low-income workers. The Mayor should give up his efforts to have the courts void the law. The living wage requirement established by this legislation is a fair and reasonable one for projects developed with significant taxpayer support. A healthy business climate that drives the creation of more living wage jobs is a win-win for everyone, but especially for New Yorkers struggling to enter the middle class and overcome poverty,” said City Councilmember Oliver Koppell, the primary sponsor of the legislation.

“I was drawn to the living wage campaign because I knew this legislation would help working people in under-served communities, especially working women and mothers who are barely getting by. This report is solid proof that we are successfully raising standards for the quality of jobs developers and companies create with our tax dollars,” said City Councilmember Annabel Palma, a lead co-sponsor of the legislation.

“A moral imperative moved us to fight for living wages because the growing plight of the working poor is a stain on the conscience of our city. All along we knew this legislation would help improve the lives of economically disadvantaged New Yorkers. We have been vindicated. We have laid a hallowed foundation upon which the faith community, city government, labor unions, neighborhood organizations, and people of conscience can continue to work together to reduce poverty and inequality,” said Reverend Dr. Ray Rivera, Senior Pastor at Latino Pastoral Action Center and Sanctuary Church in the Bronx.