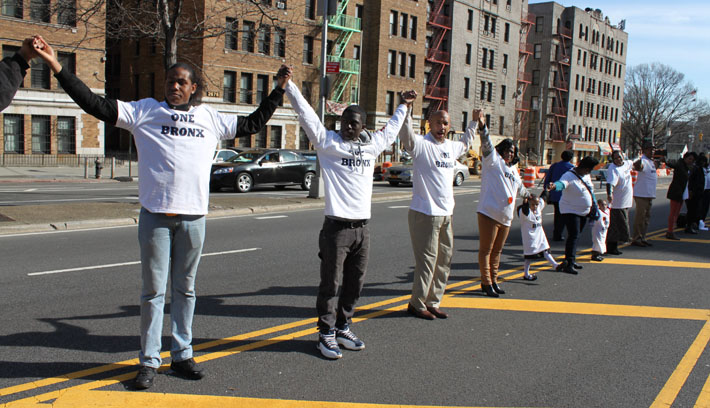 Event United Thousands of Bronxites in Opposition to Violence

On Sunday, April 14, Bronx Borough President Ruben Diaz Jr. joined with thousands of community and clergy members to join “Hands Across the Concourse” in opposition to gun violence and domestic violence.

The event, co-produced by the Bronx Reentry Task Force and the Bronx Clergy Criminal Justice Roundtable, saw Bronx residents and other concerned community leaders join hands in opposition to violence along the Grand Concourse, between West Kingsbridge Road and Mosholu Parkway.

“I am so glad that so many people across our great Borough stood together in this chain of love as brothers and sisters to show those who continue to plague our streets with violence that we are not afraid to stand together as one family, one Bronx to put a stop to these senseless acts of violence. The Bronx has had enough, and we will continue to work towards a safer borough for those who live, work and raise their family here,” said Bronx Borough President Ruben Diaz Jr.