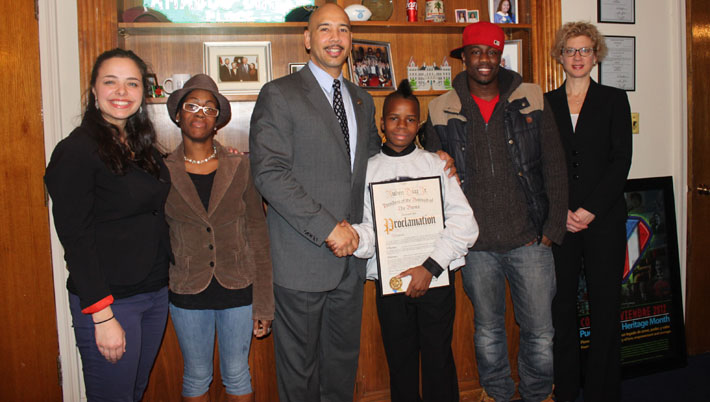 The Borough President presented a proclamation to Big Brother Jermaine, Little Brother Josiah and representatives of BBBS of NYC at Borough Hall

“Young people face so many challenges growing up today and the presence of a mentor can make all the difference in overcoming these obstacles and becoming a successful adult,” said Borough President Ruben Diaz Jr. “That is why I am proud to declare January 28th ‘Mentoring Day’ in the Bronx. I salute Big Brothers Big Sisters of NYC for its work to ensure every child in this city has a positive role model, and I urge caring adults throughout the Bronx to volunteer today to make a difference in someone’s life.”

As part of National Mentoring Month, which is celebrated each January, Big Brothers Big Sisters of NYC launched its 2013 mentor recruitment effort, intended to attract more caring adults from the Bronx and throughout the five boroughs to volunteer to be positive role models to the city’s youth.

“National Mentoring Month provides us with an opportunity to celebrate our incredible mentors and the proven impact they have on young people through our programs,” said Hector Batista, executive director of Big Brothers Big Sisters of NYC. “As New Yorkers, we all share a responsibility to help assure brighter futures for our young people and we encourage adults in the Bronx to do their part in 2013 by giving the gift of mentoring.”

In honor of this year’s National Mentoring Month, BBBS of NYC hosted a number of recruitment drives, workshops, service projects and fundraisers, as well as the Fifth Annual Tournament of Champions Pong on January 24th at Grand Central Terminal – a highly anticipated table tennis tournament that raised money to support the organization’s mentoring programs. Public officials also participated in special events throughout the month in support of Big Brothers Big Sisters of New York City.

In addition, the Big Brothers Big Sisters of NYC Center for Training and Professional Development offered educational seminars intended to help equip non-profit professionals throughout the five boroughs to develop their own mentoring programs and capabilities.

Through this campaign, BBBS of NYC intends to inspire adults throughout New York City to volunteer as mentors to children in need of positive role models. Big Brothers Big Sisters of NYC currently serves more than 3,500 young people every year through a number of specialized volunteer mentoring programs, with a growing list of hundreds more children waiting for a Big Brother or Sister to give them this invaluable gift.

Mentoring is open to adults 21 or older, residing in the five boroughs, and it is free to volunteer. To become a volunteer mentor, donate, or learn more about Big Brothers Big Sisters of NYC and National Mentoring Month, please log onto www.bigsnyc.org or call 212-686-2042. Businesses interested in joining the more than 45 corporations that already have Workplace Mentoring Programs can also email wmc@bigsnyc.org.