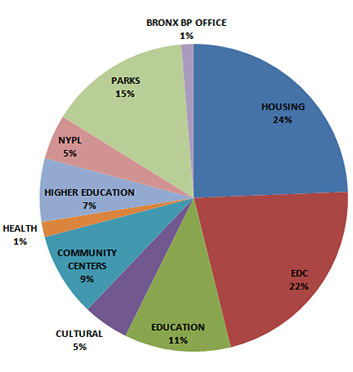 Today, Bronx Borough President Ruben Diaz Jr. announced that his office has provided more than $22 million in capital funding to worthy Bronx organizations as part of his FY2013 budget.

In total, Borough President Diaz has provided $22,971,000 in capital funding to organizations from every corner of the Bronx, focusing on areas of economic development, housing, education and parks, among other areas.

“Each year, my office is proud to support dozens of amazing schools, community organizations and development projects across the Bronx. This critical funding will help to bring many important projects to completion, helping our borough become an even greater place to live, to work and to raise a family,” said Bronx Borough President Ruben Diaz Jr.

The largest portion of this year’s budget allocation—roughly 24 percent—went towards funding housing developments in the borough. This includes 110 units of mixed-use housing in West Farms as well as a solar thermal project to green existing buildings through partnerships with community organizations.

“Our borough’s economy continues to grow, and these projects will ensure that we continue to see considerable job creation and retention in the Bronx,” said Borough President Diaz.

Borough President Diaz also funded a total of 29 projects related to the borough’s education institutions. This includes funding for a green roof installation at the future Highbridge Middle School, an auditorium upgrade at P.S. 91 in University Heights, gymnasium upgrades at P.S. 119 in Castle Hill and technology upgrades at a number of schools across the borough.

Borough President Diaz also funded several important higher education projects, including new handicapped entrance ramps and a renovation of Ohio Field on the campus of Bronx Community College, a roof replacement at the Savoy Building at Hostos Community College and the development of a One-Stop Student Services & Transfer Center at Lehman College.

“Education remains an important focus of my administration, and my office will continue to provide the necessary funding that Bronx students at all levels need to succeed,” said Borough President Diaz.

Borough President Diaz also provided significant funding for parks, almost 15 percent of the budget for a total of $3.4 million. This includes a new dog park at Soundview Park, as well as renovations to the hockey rink at Bufano Park in Throggs Neck and basketball courts at Orchard Beach. Borough President Diaz also funded libraries, health providers and other important institutions in this year’s capital budget, such as upgrades at the Spuyten Duyvil and Wakefield branch libraries and new dental equipment at both Lincoln Hospital and the Union Community Health Center.

“Each of these projects, in its own way, will contribute to the continued revitalization of our borough, and I am thrilled to have played a role in so many exceptional new developments,” said Borough President Diaz.