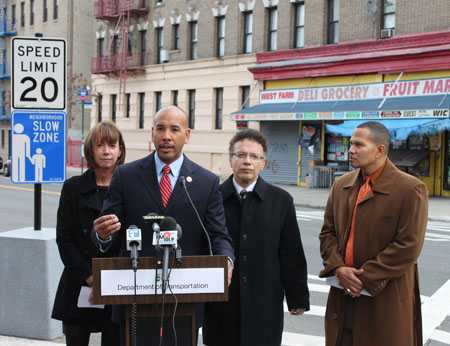 Speed limit in Claremont neighborhood of the Bronx reduced to 20 mph, traffic calming measures will help reduce unsafe speeds in residential area with many schools

New York City Department of Transportation (DOT) Commissioner Janette Sadik-Khan today joined Bronx Borough President Ruben Diaz Jr. and City Council Transportation Committee Chair James Vacca (Bronx) to announce the start of the city’s first-ever Neighborhood Slow Zone, in the Claremont neighborhood of the Bronx, reducing the local speed limit from 30 m.p.h. to 20 m.p.h. and adding traffic calming measures to make residential streets even safer and more welcoming for local residents. DOT is also launching a new application process allowing communities to request slow zones in residential areas in all five boroughs at www.nyc.gov/dot. Neighborhood Slow Zones were announced last year as part of the DOT’s landmark Pedestrian Safety Study and Action Plan to continue to reduce the number and severity of traffic crashes on residential streets following the four safest years in New York City’s history. The Claremont Slow Zone is marked by the city’s first street-flanking, eye-catching blue “gateway” signs that clearly indicate the entrance of the slow zone, and 28 new signs mark the 20 mph speed limit in and around the zone. The zone itself is self-enforcing, with nine new speed bumps installed in addition to the five already installed on streets within the quarter-square-mile zone, and “20 MPH” is being stenciled in eight-foot-high letters at 45 other locations in the zone. The Commissioner was joined by Borough President Diaz, Council Member Vacca and local leaders at the intersection of 167th Street, Vyse Avenue and West Farms Road, one of the 14 gateway entrances to the slow zone.

“We know for a fact that slower drivers mean safer streets, and the implementation of this ‘slow zone’ in Claremont will lead to a safer community for children, parents, our senior citizens and everyone who lives in this great Bronx neighborhood,” said Borough President Ruben Diaz Jr. “I thank the Department of Transportation and Commissioner Janette Sadik-Khan for bringing this pilot program to the Bronx, and I look forward evaluating its success in the future.”

“When local communities ask for 20 mile an hour speed limit signs, we must make them available as a tool in our fight against those who place the lives of others in jeopardy,” said City Council Member Vacca. “Speeding kills! I am very supportive of attempts to reduce speeding because doing nothing about this problem is not an option. We need greater enforcement of speeding laws and special attention to chronic speeding locations as part of a zero tolerance strategy.”

The Claremont Neighborhood Slow Zone is bordered by Southern Boulevard; 167th Street/Westchester Ave.; West Farms Road/Boone Avenue; and East 174th St. Claremont was selected for its relatively high frequency of serious traffic crashes and for the area’s definable boundaries that could be easily marked for a zone. Between 2005 and 2009 there was one fatality in the largely residential area, which also houses six schools. The zone itself is a self-enforcing, reduced speed area using speed humps, markings and signs. Slow Zones are also expected to reduce cut-through traffic and traffic noise in residential neighborhoods. Community Board 3 approved the zone in May.

DOT will continue to create Slow Zones in response to applications from communities, available at www.nyc.gov/dot. After each round of applications, DOT will select appropriate locations, work with communities to design and install the Slow Zones, and present to local Community Boards for approval. Potential locations for the slow-speed zones are evaluated by severity crashes per mile and criteria such as the number of schools, senior and day care centers, as well as consideration of truck and bus routes and roadway types.

In the last four years, DOT has enhanced street safety engineering in all five boroughs, including through the Safe Streets for Seniors and Safe Routes to Schools programs. Safety improvements continue be installed throughout the city, including the addition of pedestrian countdown signals at more than half of the 1,500 locations in all five boroughs announced last year and installing more than 1,500 speed bumps citywide.

For more information, including the criteria for establishing a neighborhood slow zone, visit www.nyc.gov/dot.