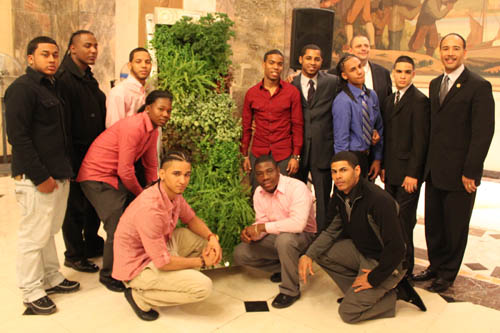 Discovery High School has been called “the greenest school in all of New York City,” in large part due to its edible food walls. With them, the school feeds 450 students healthy meals and remains the preeminent “School Garden to School Café” site in all of New York City with a profitable, student run, community-based farmer’s market. During the event Discovery High School received the Excellence in School Wellness Award “The Greenest Classroom in NYC,” an honor given by the New York City Strategic Alliance for Health (SAfH).

“We are creating a new learning model right here in The Bronx. With programs like this vertical farm we are becoming pioneers in green technology and preparing our youth to be the leaders of this new economy. I am very proud because our own Discovery High School is leading an important movement in not only New York City, but across the nation,” said Bronx Borough President Ruben Diaz Jr.