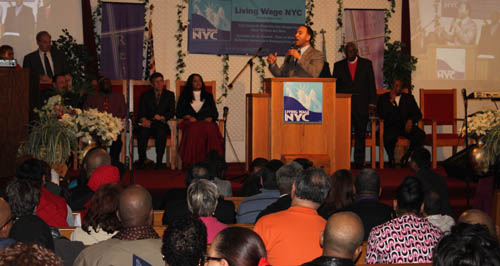 On April 4, 1968, Dr. Martin Luther King Jr. was killed while fighting for living wage jobs. Tonight in Brooklyn and the Bronx, hundreds gathered to honor his legacy as part of the growing citywide movement for a living wage. On this historic occasion, elected officials from Brooklyn and the Bronx joined faith leaders, labor leaders, community leaders, and local residents in pushing for swift passage of the Fair Wages for New Yorkers Act, popular legislation that will help create more living wage jobs.

“New York City offers a national roadmap for continuing my father’s unfinished work of economic justice… We need the living wage movement to succeed and spread to other parts of the country. Countless stories of the working poor today are about people making impossible choices: food or rent, clothing or electricity. When we pause over those stories, and understand their painful significance, we grasp something fundamental about a country as wealthy as ours: no working person should have to settle for surviving over living. It’s that simple,” he said in a statement.

“In honor of Dr. Martin Luther King’s fight for equality and economic justice, we come together today to call on the City Council to make the passage of the Fair Wages for New Yorkers Act a reality.  It is time for New York City to join the growing list of communities that promote quality development through living wages.  When developers take heavy subsidies from taxpayer wallets, they must do better by those they employ. We can no long accept business as usual,” said Bronx Borough President Ruben Diaz Jr. at a rally in the Bronx Pentecostal Deliverance Center.

In Brooklyn, hundreds gathered at Bethel Baptist Church for a spirited service, also calling on the City Council to pass the living wage legislation. The service began with a moving processional and speeches by elected officials, faith leaders, labor leaders, community leaders, and workers.

“We must honor the legacy of Dr. Martin Luther King Jr. not in words, but in deeds: elected officials must ensure that government continues to protect and improve the lives of all working people. That means standing up for a living wage so that countless working New Yorkers no longer feel condemned to poverty, but instead can finally get closer to achieving the kind of economic security they need and deserve,” said Stuart Appelbaum, President of the Retail, Wholesale and Department Store Union, UFCW, at Bethel Baptist Church.

“It’s a very simple concept: the government shouldn’t be in the business of subsidizing poverty. If we’re giving subsidies to businesses, we should demand that they offer jobs that pay a living wage,” said Brooklyn City Council member Jumaane D. Williams.

“Members of our faith community here in Brooklyn make up a huge segment of our working poor. It is a constant struggle to support ourselves and our families. Tonight, we must honor the legacy of Dr. Martin Luther King Jr. and demand a living wage for all New Yorkers by starting with passage of the Fair Wages for New Yorkers Act,” said Rev. Dr. H. DeVore Chapman of Bethel Baptist Church.

Michael Valdez, who worked at a subsidized development, told the Brooklyn participants, “It is very hard to support a family while making the minimum wage. People like me need a living wage to make ends meet.”

At the One Bronx Rally for a Living Wage, hundreds of community members joined their clergy to sign postcards calling for City Council Member James Vacca, the only Council member in the Bronx who hasn’t signed onto the bill, to support the Act.

“We are going to make sure developers of megaprojects in New York City who expect to receive mega-subsidies paid for by the taxpayers pay their fair share by paying a living wage.  There will be no more negotiations from project to project and the playing field will be level for all those who want to do business using our subsidies,” said City Council Member Oliver Koppell, chief sponsor of the Fair Wages for New Yorkers Act.

The Fair Wages for New Yorkers Act would require employers that receive major public tax subsidies to pay employees at least $10 per hour with benefits, or $11.50 without. The living wage legislation now has 29 City Council co-sponsors.

"I work 40 hours a week for minimum wage and no health benefits. I cannot afford to be self sufficient. I have a message tonight for Council member Vacca: ‘Will you stand with the working poor like me to support the Fair Wages for New Yorker’s Act?’” said Linda, a middle-aged worker in a fast food chain.

“Just as we teach our people they have a right to spiritual empowerment, they also have a right to be empowered economically.  We as faith-based leaders must be the voice for the voiceless and do everything in our power to make sure this bill is passed for them and the generation that follows,” said Rev. Que English, Senior Pastor of the Bronx Christian Fellowship.

More than 45 cities have enacted such legislation and have found that these policies create quality jobs for local residents without slowing economic growth or preventing economic development. New York City is behind the times on this issue and, as a result, publicly subsidized developments are keeping people in poverty-wage jobs, rather than providing them with opportunities to get ahead. For more information on the Living Wage NYC campaign, visit http://www.livingwagenyc.org.