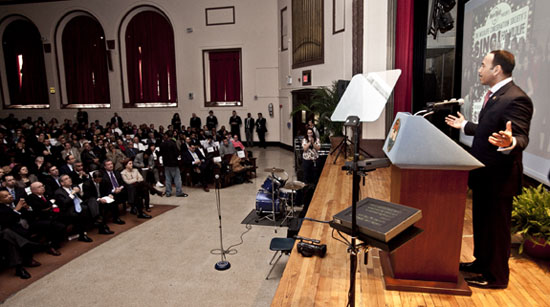 Today, to a full house at DeWitt Clinton High School in the northwest Bronx, Bronx Borough President Ruben Diaz Jr. delivered his second “State of the Borough” address. During the speech, Borough President Diaz announced several initiatives his office will pursue in the upcoming year, such as bringing a first-class hotel to the Bronx, hosting the borough’s first ever education summit and expanding the successful “Peace in Our Streets” initiative against gun violence.

“Together, as ‘One Bronx,’ we come together today to offer a positive vision for the future of our borough,” said Bronx Borough President Ruben Diaz Jr. “We come together to celebrate our successes while offering new ideas and concepts to build our borough for the future. In development, in housing, in business, in health, and in education, we are developing the ideas that will shape the future of our entire City, right here in the Bronx.”

During the speech, Borough President Diaz highlighted economic development in the Bronx. While highlighting specific cases, the borough president also noted that the Bronx Overall Economic Development Corporation (BOEDC), which serves as the economic development arm of his office, has pushed more than $32 million in funding into the borough’s economy to a wide variety of businesses. In addition, the BOEDC provided assistance, financial or otherwise, to almost 700 Bronx businesses in the last year.

“My administration has and will continue to make intelligent economic development a reality.  We have taken major steps to market the Bronx to new businesses, to support our existing businesses, and to grow the overall economy of our borough,” said Borough President Diaz.

Part of growing the new Bronx economy is bringing new business to the borough. Borough President Diaz spoke at length regarding the initial steps that have been undertaken to bring a first-class hotel to the area near Yankee Stadium.

“This development would serve as a new tourism hub for our borough, while creating hundreds of good jobs for Bronx residents and greatly enhancing the area surrounding Yankee Stadium,” said Borough President Diaz.

On the future of the Kingsbridge Armory, Borough President Diaz noted that the Kingsbridge Armory Task Force would put forward recommendations for the future of the historic structure in the spring. The borough president also challenged Mayor Michael Bloomberg to join him in making the redevelopment of the historic structure a reality.

“The report of this task force must be the cornerstone of a new RFP, and I invite the mayor to join with me to responsibly redevelop the Kingsbridge Armory,” said Borough President Diaz.

Borough President Diaz also continued his call for a new “living wage” law in New York City, one that would require developers who receive heavy taxpayer subsidies to do better by their employees. Statistics show that income disparity in New York City has increased dramatically over the past two decades. In addition, there is considerable research that shows that a “living wage” law would not harm business, and that such laws provide workers with the ability to both improve their financial situation and rely less on government assistance.

“It is time to hold hearings on this legislation, and for the City Council to bring it to a vote. The people of New York City cannot afford to wait,” said Borough President Diaz.

Borough President Diaz focused on education in the speech, as well. He noted that this fall, his office will host the borough’s first-ever education summit, which will bring together education leaders from across the nation to both discuss the problems facing our public schools and to develop ideas for the future.

The borough president also noted that his office has continued its fight to make public schools safer, by continuing to lead the fight to remove PCBs, a dangerous chemical that was used in school construction for many years, from school buildings. Borough President Diaz’s commitment to make the Bronx safer and healthier extends outside of schools, as well. He noted during the speech that he has allocated funding to convert one Bronx building to cleaner burning fuel, a move that will keep the building affordable to tenants while also contributing to a greener Bronx.

In addition, Borough President Diaz announced that his office will seek to create, in conjunction with the City Council, a new law requiring a “health impact statement” be developed as part of major development projects. This initiative would ensure that new development does not have an adverse impact on the health and well-being of neighborhoods across the City.

In other funding, this year Borough President Diaz provided more than $12 million in funding for schools across the Bronx, funding that was used to provided critical improvements to the physical plant of Bronx public schools. In addition, the borough president was able to leverage almost $16 million in funding into $442 million in new housing development across the borough. Borough President Diaz also highlighted new park improvements that have been made in the Bronx, as part of the $37.6 million he allocated in total capital funding this year.

The Bronx saw some hardships this year, but Borough President Diaz noted that even in the most trying times the borough came together in a positive way. A spate of bias crimes last year has led to the formation of a new task force, to be made up of clergy and community leaders from all faiths, ethnicities and sexual orientations, designed to stand together in the face of future hate crimes. In addition, the borough president pointed to the success of his “Peace on the Streets” initiative, which works to end gun violence in the Bronx. During the speech, the borough president took time to recognize the hundreds of volunteers who assisted with this effort, and urged all Bronxites to join this effort when it restarts in the coming weeks.

“We reached thousands of Bronxites, and the message we heard from them was loud and clear: they are tired of being terrorized in their neighborhoods… they are tired of keeping their children inside, for fear that they will be struck down by a stray bullet… they are tired of the violence. I agree…enough is enough,” said Borough President Diaz.

The borough president closed his speech with a call to all Bronxites to come together, as “One Bronx,” to support efforts in all neighborhoods to make the borough a better place to live.

“It is time to let the world know once again that the Bronx is a place of success. We face challenges— in education, in the economy, in making our borough a greener place. But we are all committed to the rebirth and continuing revitalization of our Bronx, “One Bronx”— the place we call home,” said Borough President Diaz.