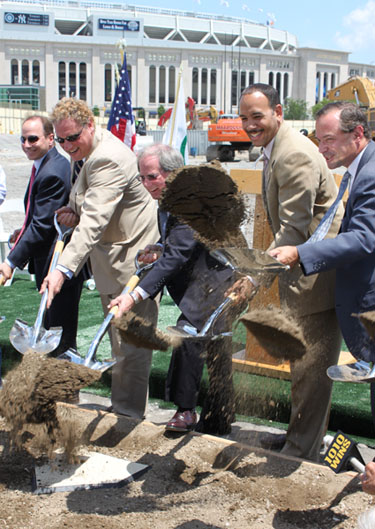 New York City, June 29, 2010 – New York City Economic Development Corporation (NYCEDC) President Seth W. Pinsky and Department of Parks & Recreation Commissioner Adrian Benepe today broke ground on Heritage Field, a new 10.78-acre park on the site of the original Yankee Stadium in the Bronx. Heritage Field is the largest of more than 32-acres of new and renovated parks to be built as part of the Yankee Stadium Area Redevelopment Project. It will encompass three championship-quality grass athletic fields, new bleachers, a comfort station, a play area, new landscaping, and elements throughout the park commemorating the old Stadium. In addition, a medallion preserved from the balcony of the old stadium, and a Yankees logo retained from the home dugout roof were presented to Bronx Borough Hall and the Bronx Museum of the Arts. President Pinsky and Commissioner Benepe were joined at the groundbreaking by Department of Buildings Commissioner Robert D. LiMandri; Borough President Ruben Diaz Jr.; New York Yankees President Randy Levine, General Manager Brian Cashman, Senior Vice President for Corporate and Community Relations Brian Smith, and Joba Chamberlain; The Bronx Museum of the Arts Chairman R. Douglass Rice; and local community groups and youth baseball leagues.

“Today marks a significant milestone in the ongoing revitalization of the South Bronx,” said NYCEDC President Seth W. Pinsky. “As promised, we completed the demolition of the old stadium in June, safely and on-budget. Upon completion of this crown-jewel, the people of the South Bronx will not only have a new state-of-the-art Yankee Stadium that has created thousands of jobs for area residents, but a new Metro-North station, upgraded infrastructure and more than 32-acres of vastly improved and expanded parkland.”

“We are pleased to break ground on Heritage Field, in the footprint of the old Yankee Stadium, where New Yorkers will have the opportunity to play ball at the same site made famous by Babe Ruth, Lou Gehrig, Mickey Mantle, Reggie Jackson, Bernie Williams and Derek Jeter,” said Parks Commissioner Adrian Benepe. “Heritage Field will feature three championship grass ballfields for baseball, softball and little league, along with event space for track and field competition including discus, shot put, and javelin. We will also provide ample spectator seating, public toilets, a pedestrian plaza, berms and very extensive landscaping with lots of trees and flowering shrubs. While we break ground on Heritage Field, the community has access to other nearby replacement parks including Mill Pond Park, Macombs Dam Park, and right across the street from Heritage Field – River Avenue Parks, where a skate park opened last month and a playground will open imminently.”

“I am thrilled that we are here today to break ground on Heritage Field. Not only will the new Heritage Field give this neighborhood another state-of-the-art park, it will also provide Bronxites of all ages with a chance to play in the same footprint as the legends of baseball—from Babe Ruth and Lou Gehrig, to Reggie Jackson and Thurman Munson, to Derek Jeter and Alex Rodriguez,” said Bronx Borough President Ruben Diaz Jr. “I would like to thank Seth Pinsky and NYCEDC for working closely with my office on this project, and I look forward to cutting the ribbon on Heritage Field next year.”

“Today is an exciting day for the City and for South Bronx,” said Councilmember Maria del Carmen Arroyo. “Not only does Heritage Field represent the culmination of years of collaboration between the City and this community, but it serves as a unique monument to the past, while at the same time, extolling the promise of a brighter future for the South Bronx.”

“The Yankees are truly excited to see the redevelopment of the neighborhood take another huge step forward,” said Yankees President Randy Levine. “This community deserves first-rate recreation facilities, and we are honored that Heritage Field will celebrate the legacy of the original Yankee Stadium.”

Groundbreaking on Heritage Field follows a year-long deconstruction, completed earlier this month, of the original Yankee Stadium. Demolition was a complex undertaking, encumbered by the fact that the former Stadium stood in the center of a densely populated neighborhood with close proximity to heavily-trafficked buildings and transportation infrastructure. The demolition was one of the first undertaken as part of the City’s new Construction Demolition and Abatement Working Group that developed 33 recommendations to enhance oversight and improve the safety of construction, demolition and abatement activities throughout the City.

“The demolition of the old Yankee Stadium was one of this City’s most complex construction projects, and our inspectors and engineers worked closely with the contractors to monitor their operations and ensure it was conducted in the safest manner possible,” said Commissioner LiMandri. “The construction of Heritage Field will become a tremendous asset to the Bronx community, and I am delighted to be a part of the groundbreaking ceremony today. As a lifelong Yankee fan, I understand so many fans cherished the old stadium, but now, a new generation of New Yorkers will be able to enjoy 11 acres of parkland and dream about playing on the big stage next door.”

Heritage Field’s southern ball field will be aligned with the original Stadium’s footprint, and additional ball fields will provide space for a number of sports activities including baseball, softball, discus, shot put, and javelin. In addition, viewing mounds, overlooks, and bleachers will provide seating for families and spectators. As part of the Commemorative Program, plaques will be placed along Ruppert Place, a segment of the original frieze will be restored, and the outline of the original playing field will be incorporated, along with graphics and photographs to evoke memories of the former stadium. Other park amenities include a new garden irrigated by a natural rain water system, and a new field-level public restroom. As part of the project, the pedestrian corridor along 157th Street will be upgraded and Ruppert Plaza, uniting Heritage Field with the adjacent Macombs Dam Park, will be built. Construction is expected to be completed by the end of 2011.

Heritage Field, designed by Thomas Balsley Associates and Stantec, with the Commemorative Program by Stephen Doyle at Doyle Partners – is the largest and last of four new parks to be built as part of the Yankee Stadium Area Redevelopment Project. As part of the Project, the City replaced more than 22 acres of parkland displaced for construction of the new stadium with over 32 acres of new and renovated parks. The completion of these parks fulfills the commitment made by the City to replace the alienated parkland. The City invested approximately $195 million to build the new parks which, along with Heritage Field, include:

•Mill Pond Park (opened October 2009) – A new waterfront esplanade and open space on 10-acres along the Harlem River, which also includes sixteen tennis courts, a restored Power House building that will house a future tennis concession, a picnic area, and a play area

As part of the groundbreaking ceremony, a Terracotta medallion removed from the original Stadium’s balcony was presented to Borough Hall. The medallion, measuring approximately 12″ x 18″ x 4″, will be on public display in the Borough President’s reception area. In addition, a concrete Yankees logo, retained from the home dugout roof that was constructed as part of the 1976 Stadium renovation, was presented to The Bronx Museum of the Arts. The logo, which measures approximately four feet by four feet and weighs nearly 750 pounds, will be on display in the South Wing of the Museum until the completion of the Museum’s new Youth Garden. Upon its completion, the logo will be relocated and placed on permanent display.

“The Bronx Museum is wonderfully excited about being a part of this special moment in time celebrating Bronx history by adding to our collection and being the new home of the Yankee logo at our museum,” said The Bronx Museum of the Arts Executive Director Holly Block.