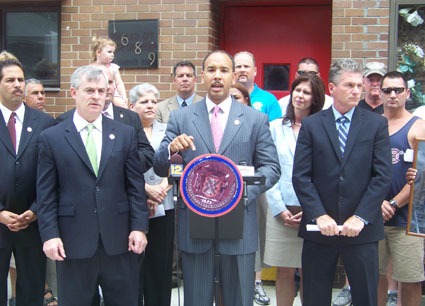 “Last time the City closed fire companies in the 1970s, a vast percentage of the Bronx burned down,” said Council Member Elizabeth Crowley, Chair of the Fire & Criminal Justice Committee. “Forty years later, the borough is still rebuilding after those fires. Let’s be clear: the losses that accrued from the fires in the 1970s far outweighed the FDNY’s cost to the City.  Let this be a warning as we continue to negotiate the budget and 20 companies remain on the chopping block.”

During the 1970s, Engine 96 was recorded to be one of the busiest fire companies in the world.  Immediately following the fire company closures the 1970s, the Bronx was in fact burning.  According to data gathered by FDNY historian Joe Flood in his book, The Fires: How a Computer Formula, Big Ideas, and the Best of Intentions Burned Down New York City – And Determined the Future of Cities, seven different census tracts in The Bronx lost more than 97% of their buildings to fire and abandonment between 1970 and 1980; 44 tracts (out of 289 in the borough) lost more than 50%.

“While we all understand the need for the FDNY cut backs during this economic downturn, compromising public safety shouldn’t be an option,” said Bronx Borough President Ruben Diaz Jr.  “Closing twenty companies will raise response times, leaving the public and firefighter’s safety in jeopardy.  We fought hard to keep Ladder 53 on City Island open last year, and will do the same to avoid any closures that could put Bronxites at risk.”

Council Member Annabel Palma said, “In the 1970’s, when the Bronx and the City of New York were facing very difficult times, many buildings were left to burn to the ground.  It is no coincidence that this dark period of time for New Yorkers occurred immediately following the decision to close fire companies, which in turn, increased response times and left our fire services without the necessary personal and equipment to fight fires effectively.  Forty years later, we can not allow these same mistakes to be made again and history cannot be allowed to repeat itself.”

Council Member Fernando Cabrera said, “If the mayor’s cuts go through it will be a return to the days of when the Bronx was Burning. When you close a fire station you’re not just shutting down one facility. You’re shutting down emergency service to countless families, who in turn may be forced into greater reliance on other city agencies such as hospitals, emergency homeless programs, and a host of city-provided social services. There is a ripple effect, just like what we saw years ago in the South Bronx, and we cannot stand by idly as the administration cuts services to the neighborhoods that need it the most.  Saving fire stations helps to save communities.”

Council Member and Majority Leader Joel Rivera, who was not able to make the rally, submitted a statement: “The closing of firehouses represents the City’s ill-advised attempt to balance their budget on the back of our emergency infrastructure.  We must do everything we can to preserve these firehouses, especially since no one but our City’s Bravest will run into burning building’s and houses.  We need to provide our firefighters with all the support they need and that includes providing them with the best equipment and most importantly, preserving existing battalion strength by saving these firehouses.”