In front of a denim-wearing crowd made up of teens from the Start Strong Bronx Advisory Board and students from the Bronx High School for the Visual Arts, Borough President Diaz read a proclamation sponsored by Council Member Annabel Palma and other Bronx City Council Members, declaring April 21, 2010 as the first annual “NYC Denim Day.” 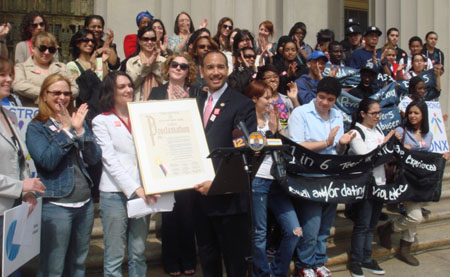 “Today we proclaimed April 21st as ‘Denim Day in NYC.’ When more than one in six high school students surveyed reported experiencing sexual violence at some point in their lives, and for 14.1 percent of them the perpetrator was their dating partner, acknowledging days like ‘Denim Day,’ to raise awareness of the issues of sexual assault and intimate partner violence, is an absolute necessity for my administration,” said Borough President Diaz.

The purpose of “NYC Denim Day” is to speak out against sexual and dating violence and to promote positive and healthier relationships, especially among pre-teens and teenagers. “Denim Day” was started 11 years ago by Peace Over Violence, the lead organization for Start Strong Los Angeles. This day was coined after a 1992 Italian court case, in which the Chief Judge argued, “because the victim wore very, very tight jeans, she had to help him remove them, and by removing the jeans it was no longer rape but consensual sex.”

This verdict enraged female members of Italy’s Parliament, who wore jeans in protest, and “Denim Day” was born.