Bronx Borough President Ruben Diaz Jr. stood with elected officials and district managers, as well as chairpersons and other members of Bronx community boards, to protest proposed cuts to community board budgets, which would have the effect of crippling these vital neighborhood institutions. 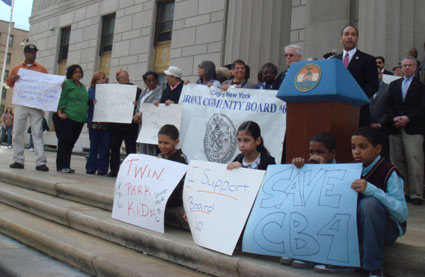 “I know firsthand the valuable work that is done each day by our community boards on behalf of the residents of their communities,” said Borough President Diaz. “They provide a strong and passionate voice for their communities as they manage issues affecting the quality of life of their residents. Community boards are the first line of defense for our communities, and even a small budget cut could mean a dramatic decrease in the quality of life of our Bronx neighborhoods.”

In the present fiscal year, the Mayor’s office has put forward a budget modification of four percent—which has yet to be approved—that would reduce all community board budgets to $186,517, down from $200,000. In the Mayor’s FY 2011 budget, the community boards’ budget the cut is annualized to the full seven percent, down to $160,437. The mayor’s contingency budget for FY 2011 due to State reductions in financial aid would reduce the community boards’ baseline budget by an additional 7.2 percent, $15,542, bringing them down to $144,895.

“The work of our community boards is too important to face these heavy cuts. Both the Mayor and the State Legislature must do the right thing and restore this critical funding, lest our communities pay the price,” said Borough President Diaz.