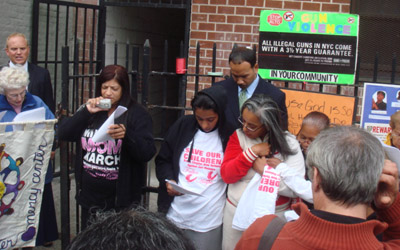 On Wednesday, September 30, Bronx Borough President Ruben Diaz Jr. joined the organization Million Mom March and members of the community of Mott Haven during a vigil to remember and honor Aisha Santiago, a young mother from The Bronx who was struck and killed by random gun violence last week.

“The killing of an innocent young mother, Aisha Santiago, who died trying to protect her son is an enormous tragedy and an act of violence that can’t be tolerated. Our elected officials, police department and community leaders must continue to work together in the difficult fight to control the use of illegal guns in our streets,” said Bronx Borough President Ruben Diaz Jr.