Yesterday, Bronx Borough President Ruben Diaz Jr. made his first official visit to the Capitol to discuss policy with federal leaders, both of New York’s senators, and members of the State’s congressional delegation.

Borough President Diaz discussed a number of issues with these legislators, such as how to bring more stimulus funds to The Bronx, green development in the borough, national healthcare reform, the potential expansion of the empowerment zone to cover more of The Bronx and identifying intermodal funding for borough transportation projects. 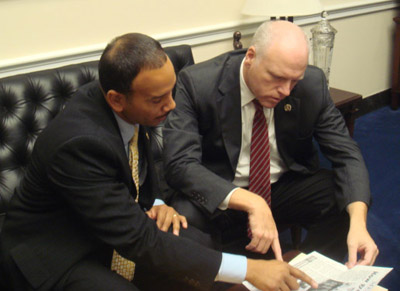 “There are a number of areas where federal funding can help our borough, from job creation to green development to modernizing our transportation hubs. These meetings represent the beginning of my administration’s efforts to bring more federal dollars to our borough, and I look forward to working with the White House and our leaders in Washington to bring that funding to The Bronx,” said Borough President Diaz.