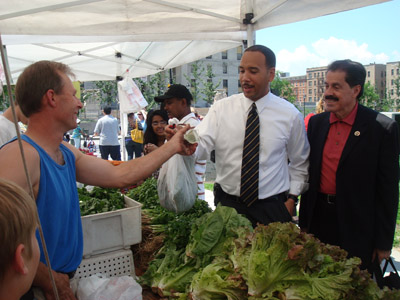 “Today we take a small step toward a healthier Bronx. With the opening of the Bronx Borough Hall Greenmarket, and the other three in our borough, The Bronx is ready to eat better, a main step for a good quality life” said Bronx Borough President Ruben Diaz, Jr.

“We are glad to work with the Bronx Borough President’s Office on the opening of the Bronx Borough Hall Greenmarket back in its original location,” said CENYC Executive Director Marcel Van Ooyen. “Greenmarkets preserve regional farmland, reduce the fossil fuels required to ship food from far distances, and encourage environmentally-sound growing methods, not to mention a convenient weekly source of healthy, fresh, local foods for Bronx residents.”

“Ensuring greater access to the food stamp program for working New Yorkers is a key component in the Bloomberg Administration’s strategy to reduce poverty,” said HRA Commissioner Robert Doar. “Because food stamps are an important supplement for families trying to make ends meet, the City has made the process of applying for the benefit easier and more convenient.”

“Access to Green markets is vital in our ongoing ‘War against Obesity’. As a supporter of Green Markets in my district and as Chair of the NYC Council Health Committee I commend our Bronx Borough President Ruben Diaz for taking on this crucial issue,” said Councilman Joel Rivera, Chair Health Committee, NYC Council.

Borough President Diaz, joined by Dr. Jane Bedell, Assistant Commissioner and Medical Director, Bronx District Public Health Office, also announced a five year grant totaling $2.6 million from the Centers for Disease Control, awarded to NYC Department of Health and Mental Hygiene to establish the NYC Strategic Alliance for Health. This new alliance is designed to promote physical activity and nutrition and to reduce tobacco use in the South Bronx, East and Central Harlem.

The South Bronx has some of the highest rates of obesity, diabetes and cardiovascular disease in New York City. According to health reports, if no change is made, more than half of all children born in the year 2000 in the South Bronx will develop diabetes at some point in their lifetime.

“This is the reason that today, here and now, I’m committing the Bronx Borough President’s office to becoming a working member of the Strategic Alliance for Health (SAFH). This new alliance is designed to improve the environments, systems, and policies that influence physical activity, nutrition, and tobacco use within schools and the broader community,” said Bronx Borough President, Ruben Diaz, Jr.