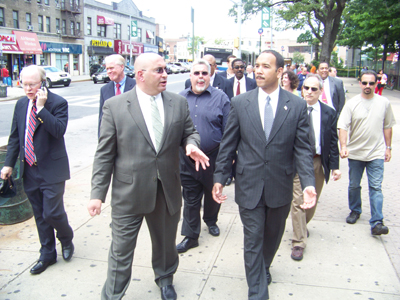 The tour was conducted in conjunction with the Association of Merchants and Business Professionals of Westchester Square in an effort to address the concerns and ideas expressed by the Association about the revitalization of the area. Numerous members of different companies and organizations of the area, such as Westchester Square Property Management, Mestousis Enterprises, Simone Development, Bronx Business Alliance, NAI Friedland Realty and the Bronx Council on The Arts were part of the tour.

“The economic health of our borough is and will continue to be a top priority of my administration. Walking tours like this let me see firsthand the issues that a neighborhood confronts and let me have face-to-face conversations with our struggling small business owners. Westchester Square has always been a cornerstone of the Bronx economy, and my office will do everything in its power to keep this area a thriving, vibrant business center,” said Bronx Borough President Ruben Diaz, Jr.

The elected officials and business members met at the corner of St. Raymond Avenue and East Tremont and reviewed the merchant corridor along Tremont to Owen Dolen Park; then made stops along the way at the Huntington Free Library, the Verizon building; Chatam Management’s rebuild project, the site of the March’s devastating business fire and the area proposed for development by Mestousis Enterprises; concluding the tour in front of the Owen Dolen Recreation Center.

“I have been working for several years now with local merchants and property owners to bring new life to Westchester Square, and I’m proud to say we have made some progress. Two new projects have been proposed that would add parking and major retailers to the area,” said Councilman Jimmy Vacca. “Cultural organizations like the Bronx Council on the Arts are taking interest. But we have much more work to do, and that is why it is so important that our new Borough President and our Commissioner of Small Business Services have decided to come down to the Square and offer their help and their support.”

Westchester Square is surrounded by the communities of Pelham Bay, Throggs Neck, Morris Park, Zerega, and Castle Hill. According to the Association of Merchants and Business Professionals of Westchester Square, the area is made up of a variety of diversified businesses, 90% of which are owner occupied. Its 132 merchant storefronts are housed in 73 buildings, and the vacancy rate, well under 10% throughout most of this decade, has risen to 13% in the current economic downturn. The surrounding area consists of 6,460 residents in 2,459 housing units; 53.9% is Hispanic, 19.1% is White, 16.5% is Asian (largely from India and Pakistan), and 4.7% is African-American.

“The success of Westchester Square in an economic development initiative has the potential to grow outward, and can therefore be a model that could be expanded later into its adjacent communities,” said John Bonizio, President of the Association of the Merchants & Business Professionals of Westchester Square.

“To succeed in such a venture, the fragmented initiatives of developers, property owners, retailers, cultural entities, and local government must be coordinated by a task force that can organize these ideas and assure smooth interaction and growth. The plan for the revitalization of Westchester Square outlines this vision, and we are grateful to the Borough President for supporting the initiative and joining with Councilman Vacca to coordinate this much needed effort.”