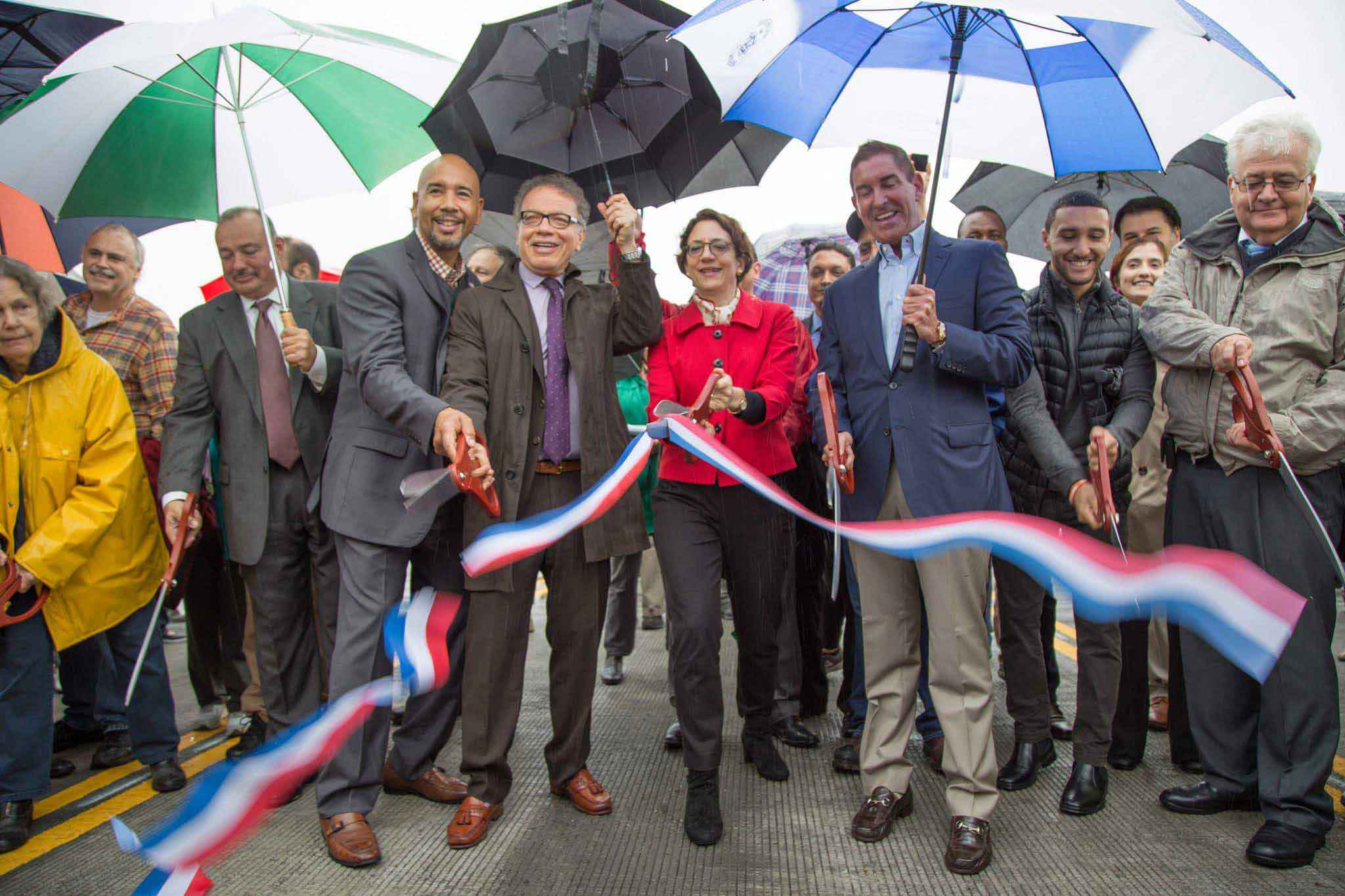 After years of planning over the new bridge’s design, a state-of-the-art structure will serve as the island’s only connector to the Bronx mainland

The Bronx—Mayor Bill de Blasio today announced the opening of the new City Island Bridge.   At a ribbon-cutting ceremony at the new bridge, an inaugural walk and ride was led by Department of Transportation Commissioner Polly Trottenberg, Bronx Borough President Ruben Diaz Jr., State Senate Co-Leader Jeff Klein, Assembly Member Michael Benedetto, and City Council Member James Vacca.  The replacement of the previous permanent bridge, built in 1901, had been the subject of decade-long controversy that included a lawsuit over a proposed replacement bridge’s cable-stayed design.  The dispute was resolved in 2014, when the de Blasio Administration chose to pursue a more restrained causeway design with far wider community support.

“City Island is a distinctive and beautiful Bronx community where people tell it to you straight,” said Mayor de Blasio.  “Where this new bridge was concerned, this community and its leaders knew they wanted a bridge that was not too big — or too small for that matter.  I offer my thanks to Polly Trottenberg and the DOT for getting it just right — a thoughtful process of community consultation, design and construction that have brought us a new working-person’s bridge that, God willing, will last us another century.”

“Among the charges Mayor de Blasio gave me in 2014 was to listen to and respect communities and be a problem-solver,” said Commissioner Trottenberg. “Here on City Island, residents knew their old bridge had outlived its useful life but they did not want the tall, cable-stayed bridge originally proposed to replace it.  Today we are proud to cut the ribbon on a new causeway bridge that complements the beauty of Pelham Bay, and thank City Islanders for all the patience and good humor that got us to this happy day.”

The City Island Bridge serves as the sole vehicular, pedestrian and cyclist access to City Island, with a daily count of 16,500 vehicles serving 4,500 year-round residents. The new bridge opening today replaces a parallel temporary structure just south of the new bridge put into use after the 1901 Bridge was closed and dismantled in 2015.  The temporary bridge, officially closed as of today, is expected to be dismantled starting in the next month — with the work finished in the next year.   Since the old bridge was closed, DOT has maintained a Facebook page dedicated to progress on the bridge’s construction.

Today’s ribbon-cutting preceded a walk over the new structure, which was then officially opened to its first motorists, cyclists and pedestrians.  The new bridge includes the following features:

“Improving infrastructure is key to strengthening a city and its economy, which is why I have always placed a high priority on investing in projects like rebuilding the City Island Bridge,” said Bronx Borough President Ruben Diaz Jr. “City Island is one of the jewel neighborhoods of The Bronx, one of the hidden gems of our great city. While we can be nostalgic about the bridge that it replaced, the new bridge represents the ongoing vitality of this island. This new bridge further opens up this great nautical village for tourists and local residents alike, giving them the opportunity to sit down and enjoy great seafood, breathe in that fresh sea air, admire the waterfront view. I want to thank Mayor de Blasio, Commissioner Trottenberg and the Department of Transportation, the Parks Department, the NYPD and FDNY, Community Board #10 and everyone else who worked on this important project.”

“The opening of this new bridge is a historic day that marks the end of a long-fought battle by the City Island community, myself and my colleagues to preserve the distinct character and beauty of the area,” said State Senator Jeff Klein. “I stood by the residents of City Island every step of the way in opposing the initial cable-styled bridge design that simply wasn’t the right fit for this idyllic setting. I want to applaud Mayor De Blasio and give a heartfelt thanks to Commissioner Trottenberg for ultimately heeding the community’s concerns regarding the initial plan and erecting this new wider and pedestrian-friendly causeway design that will improve traffic flow to and from City Island.”

“This new bridge will go a long way towards preserving City Island’s unique nautical history and its culture,” said Council Member James Vacca. “I am really happy that DOT was able to work with the community to develop a design that suits their needs and fits the City Island way of life. I thank Commissioner Trottenberg and her whole team for their hard work on this project.”

The entire City Island Bridge project, including areas surrounding adjacent to the new bridge, is expected to be completed in the next year; in addition to the removal of the temporary bridge,  work will include construction of the Catherine Scott promenade and Legion Triangle.