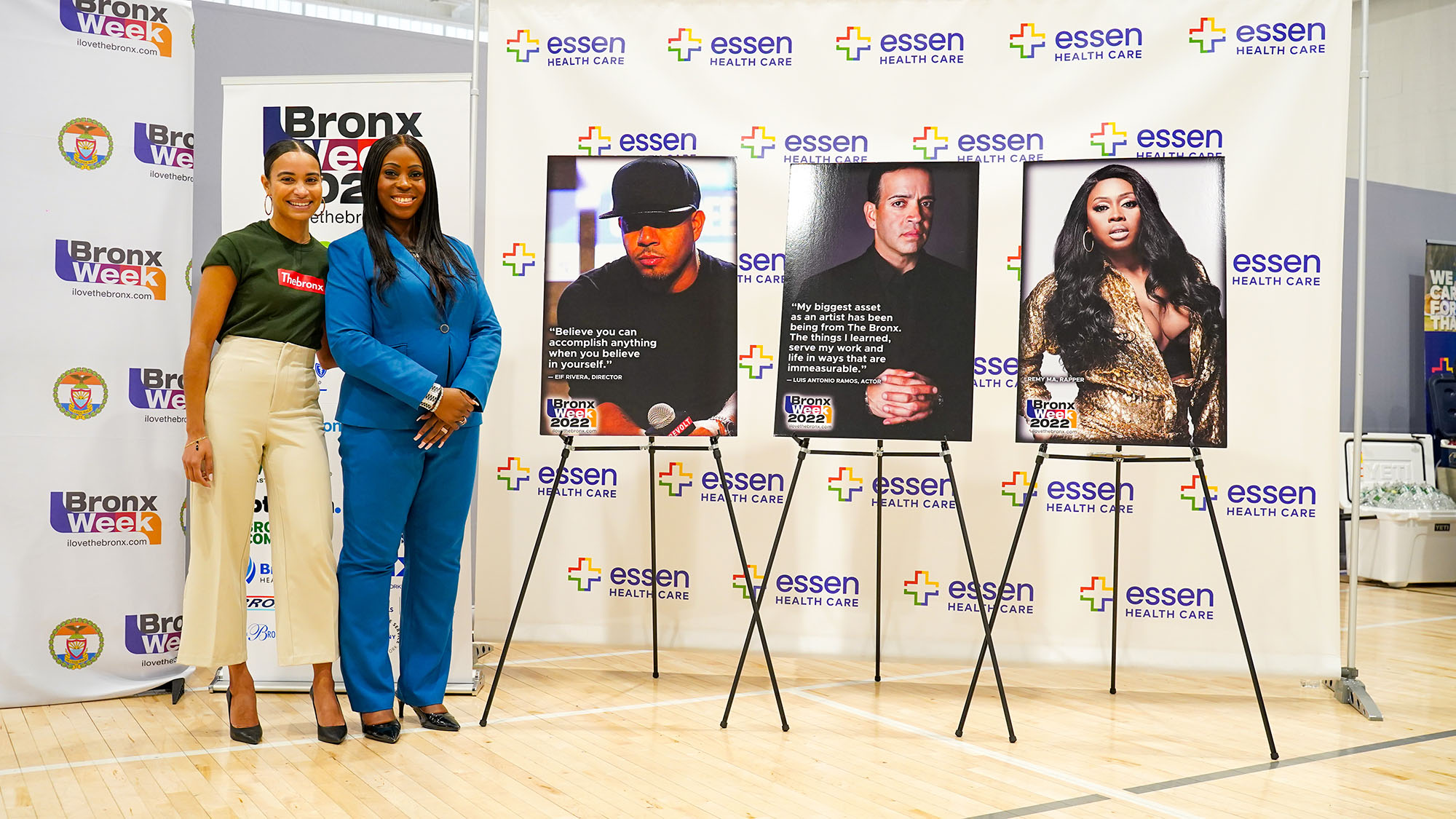 Bronx, NY — On Monday, May 2, 2022, Bronx Borough President Vanessa L. Gibson joined with the Bronx Tourism Council, Humana, Essen Health Care, and other community partners to host a media preview and celebration to kickoff her FIRST Bronx Week at the Northeast Bronx YMCA.

During the kick-off event, Borough President Gibson and The Bronx Tourism Council announced the Bronx Walk of Fame Class of 2022. Established in 1997, the Bronx Walk of Fame has served as the premier honor that can be bestowed upon any Bronx native, with past luminaries including Prince Royce, Chazz Palmintieri, Fat Joe, Swizz Beats and over 120 other heros and sheros of the borough.

“Bronx Week celebrates the best of our borough – our veterans, seniors, educators, parents, entertainers, youth, business leaders, healthcare professionals, volunteers and everyone else that has helped to make this borough a great place to live and has a vested interest in seeing us move forward,” said Bronx Borough President Vanessa L. Gibson. “It has been a challenging two years as we attempt to recover from the devastating impact COVID-19 had on our city, but my office has worked closely with the BOEDC and The Bronx Tourism Council to ensure this year`s Bronx Week is memorable and highlights the best of our borough. We are also very excited to announce this year’s honorees to the Bronx Walk of Fame! Three incredible individuals that have used their talents and skills to showcase the Bronx in a positive light.”

“We are grateful and ecstatic to be able to bring back Bronx Week to its full glory after two years of cancellations. This is the time where we pay tribute to the best of the borough and this year we have so much to celebrate,” said Olga Luz Tirado, Executive Director, The Bronx Tourism Council.

The 2022 Bronx Walk of Fame Inductees are:

EIF RIVERA was raised in the South Bronx and is of Puerto Rican descent. He began illustrating comic book characters at a young age using different mediums to bring his work to life. His obsession for art and music led him to the passionate and thriving world of Hip Hop culture.

He attended the NYC High school for Art and Design and made music Industry connections which led him to create logos, album covers & campaigns for the Hip Hop Community like the iconic Big Pun logo and the wildly successful logo for Young Jeezy’s Snowman.

He is now a TV Episodic Director with his first Directorial debut on the Starz / Lionsgate network. His portfolio of work includes directing “Raising Kanan,” “Black Mafia Family,” and “Bobby Brown Story,” to name a few. He won the Video of the Year award in 2020 CBS/BET network awards show. Video of the year 2019 Latin American Music Awards along with Dj Khaled’s Grammy win for” Higher” featuring John Legend. He has amassed over 2 Billion Youtube views for just two videos alone! Cardi B’s ” I Like It” and Justin Biebers ” I’m The One”.

LUIS ANTONIO RAMOS was born in San Germán, Puerto Rico, this next inductee was raised in The Bronx. He is known for his role in the American Drama series “Power” and for his work in Spike Lee’s “Do the Right Thing” and in the sitcom “Martin.”

He had recurring roles in several television shows such as on “In the House”and “Ink,”and guest-starring roles on “NYPD Blue,” “Just Shoot Me,” “The Drew Carey Show,” “The Jamie Foxx Show,” “New York Undercover,” “Mad About You,” “Law & Order” and “Miami Vice.”

He starred in the film “Miracle In Spanish Harlem,” in which he played a single father of two young girls and on USA Network’s The Huntress. His TV Movie career includes “The Other Side of Dark,” “Mothershed or Berndt,” “The Anissa Ayala Story,” and “Nails.”

He is the recipient of the “Helen Hayes Award” for Best Actor for his performance in the play “Stand Up Tragedy.” His additional theater work includes “Dancing on Her Knees,” “Cloud Tectonics,” “Romeo and Juliet,” “Tears Will Tell It All,” “Widows,” “Richard II,” “Henry the IV,” “Pendragon,” “The Sound of Music,” “A Midsummer Night’s Dream,” and “Latins from Manhattan.”

REMY MA was born in The Bronx and grew up in the Castle Hill Projects. She started writing poetry at a young age and her work caught the eye of Big Pun. She began her career singing on Big Pun’s album “Yeeeah Baby.”

After the untimely death of Big Pun, rapper Fat Joe signed her to his imprint label under SRC and Universal where she became a member of his hip hop group “Terror Squad.” She appeared on their second album, “True Story,” Their single, “Lean Back”, which topped the Billboard Hot 100 for three weeks and earned her a Grammy nomination.

In 2006, she released her debut album “There’s Something About Remy: Based on a True Story,” which was supported by the singles “Whuteva”, “Conceited” and “Feels So Good”.

She continued to work with Fat Joe and recorded “All the Way Up”, receiving platinum certification from the Recording Industry Association of American, and two Grammy Award nominations.
Last year she starred in the film “6:45,” horror film that was directed by Craig Singer.

Bronx Week is the annual celebration of everything that makes The Bronx a great place to live, work and raise a family, and was made possible with the generous support of leading health and well-being company Humana, the Gold Sponsor.

“Humana is thrilled to sponsor this year’s Bronx Week and to help celebrate the many ways that make living and working in the Bronx unique,” said Humana’s Northeast Region President Julie Mascari. “We hope you’ll join our Humana team by participating in many of the fun and informative events planned in what promises to be an exciting week for the entire community.”

Beginning on May 5th, there will be a series of events from every sector of the community including senior activities, small business networking, family, health, finance, and more. Bronx Week will culminate in a black-tie gala honoring our Bronx Walk of Fame Inductees on Saturday, May 14.

“Essen Health Care is a proud partner of Bronx Borough President Gibson and is excited to be part of her first, Bronx Week. The series of events to follow is a historical moment for her, marking transformational action in a county still experiencing so much inequity. Essen Health is thrilled to support her efforts.” said Silvia Posada, SVP Network Development, Essen Health Care.

“Bronx Week is a celebration of all the beauty that is The Bronx and we are so honored to be a part of the festivities. The YMCA is here for all Bronx residents as we work together to empower youth, improve health and strengthen community,” said Shay Gattis, Executive Director, Northeast Bronx YMCA.

For more information about Bronx Week and the 2022 events, visit www.ilovethebronx.com.