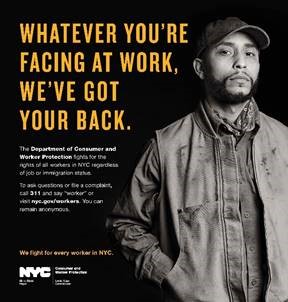 “As the fairest big city in America, NYC is making sure to make significant efforts to back our city’s workers,” said Deputy Mayor for Strategic Policy Initiatives J. Phillip Thompson. “With this new public education campaign, we hope hard-working New Yorkers realize that we want their voices heard and that we are here to protect them. It is only when our economy is inclusive by ensuring workers across all industries and all demographics have the tools and information they need to succeed, that our city can truly be a place of opportunity for all.”

“With the federal government rolling back protections for workers—especially those who are most vulnerable—we want New Yorkers to know that we are here for them,” said DCWP Commissioner Lorelei Salas. “With this campaign, we hope New Yorkers will know that we are a resource where they can learn more about their local workplace rights. Through broad and targeted advertising, we will reach both the workers who are covered by new City laws like Fair Workweek and Freelance Isn’t Free and workers who may not be aware of their rights like Paid Safe and Sick Leave or who are unsure of or wary of coming to a government agency. As the campaign tagline says—We fight for every worker in NYC.”

“Everyone has the right to be treated fairly and appropriately at work. The Department of Consumer and Worker Protection’s new campaign will remind New York employees of their rights in the workplace while also helping to protect them from abuse and mistreatment. DCWP is a resource for all New Yorkers, and I thank Commissioner Lorelei Salas and everyone at DCWP for their efforts on behalf of our city’s diverse workforce,” said Bronx Borough President Ruben Diaz, Jr.

The new multilingual campaign highlights that DCWP fights for all workers in NYC regardless of their job or immigration status and encourages New Yorkers to visit nyc.gov/workers or call 311 for more information about workplace rights or to file a complaint, which can be filed anonymously. The campaign ads feature workers in four industries—fast food or retail, paid care, day labor, and freelance—where DCWP has seen higher rates of workplace rights violations and/or the Agency enforces municipal workplace laws. The ads are running in the city’s subway cars and stations, bus shelters, LinkNYC, as well as in print, on radio, online, and in neighborhood businesses. DCWP also released a new animated video about workplace rights as a companion to its Workers’ Bill of Rights.

“An informed workforce is an empowered workforce,” said Public Advocate Jumaane D. Williams. “With the federal government and big corporations united in their goal of denying workers’ rights, here in the city we are standing up to protect working people. I want to thank the Department of Consumer and Worker Protection for bringing awareness to these efforts, and I plan to continue to push an agenda that focuses on the needs of working people.”

“With a president adamant about stripping long-fought protections for workers, New Yorkers need to know their rights now more than ever,” said Manhattan Borough President Gale A. Brewer. “The Department of Consumer and Worker Protection has my thanks for organizing this effort to amplify the support system New York City has for its workers.”

“New York City has taken the lead in protecting workers’ rights, from guaranteeing people a living wage to mandating paid sick leave. But the reach of our efforts will be limited if employees don’t know how to take advantage of these programs – and unfortunately, we can’t always count on employers to educate them about the benefits to which they are entitled under the law. That’s why I am so pleased that the Department of Consumer and Worker Protection is launching a campaign to ensure every worker, and particularly those vulnerable to exploitation, is aware of their rights. This outreach program shows that the City stands with workers, today and every day,” said Council Member Rafael Espinal.

“Promoting the ideals of a fair and just city demands that all New Yorkers central to the success of our economy be protected from abuse,” said I. Daneek Miller, Committee on Civil Service & Labor Chair. “A consumer dollar gained at the expense of the health, safety, and security of a worker diminishes the value of the industries and businesses that serve us. Under this Administration, our Department of Consumer and Worker Protection has worked with the Civil Service and Labor Committee to make remarkable achievements towards the advancement and preservation of those principles. It’s only appropriate that the scope of its mission now broaden to include the protection of all our city’s workers, and that the public be informed.”

DCWP, which houses the largest municipal labor standards office in the country, enforces, implements, and works on the development of a new generation of minimum labor standards for a stronger city, focuses on ensuring all workers can realize these rights, regardless of immigration status, and embraces its mandate to focus on issues affecting immigrants, people of color, women, and other populations that face vulnerabilities in the workplace. DCWP enforces a number of municipal workplace laws, including the Paid Safe and Sick Leave Law, the Freelance Isn’t Free Act, Commuter Benefits Law, the Living and Prevailing Wage Laws, the Grocery Workers Retention Act, and the Fair Workweek Law. NYC’s labor workplace laws apply to all covered employees regardless of immigration status. Employers cannot punish, penalize, retaliate, or take any action against employees that might stop or deter them from exercising their rights, and workers can file a complaint online at nyc.gov/workers or by calling 311. Complaints can be filed anonymously.

The NYC Department of Consumer and Worker Protection (DCWP) protects and enhances the daily economic lives of New Yorkers to create thriving communities. DCWP licenses more than 81,000 businesses in more than 50 industries and enforces key consumer protection, licensing, and workplace laws that apply to countless more. By supporting businesses through equitable enforcement and access to resources and, by helping to resolve complaints, DCWP protects the marketplace from predatory practices and strives to create a culture of compliance. Through its community outreach and the work of its offices of Financial Empowerment and Labor Policy & Standards, DCWP empowers consumers and working families by providing the tools and resources they need to be educated consumers and to achieve financial health and work-life balance. DCWP also conducts research and advocates for public policy that furthers its work to support New York City’s communities. For more information about DCWP and its work, call 311 or visit DCA at nyc.gov/dca or on its social media sites, Twitter, Facebook, Instagram and YouTube.