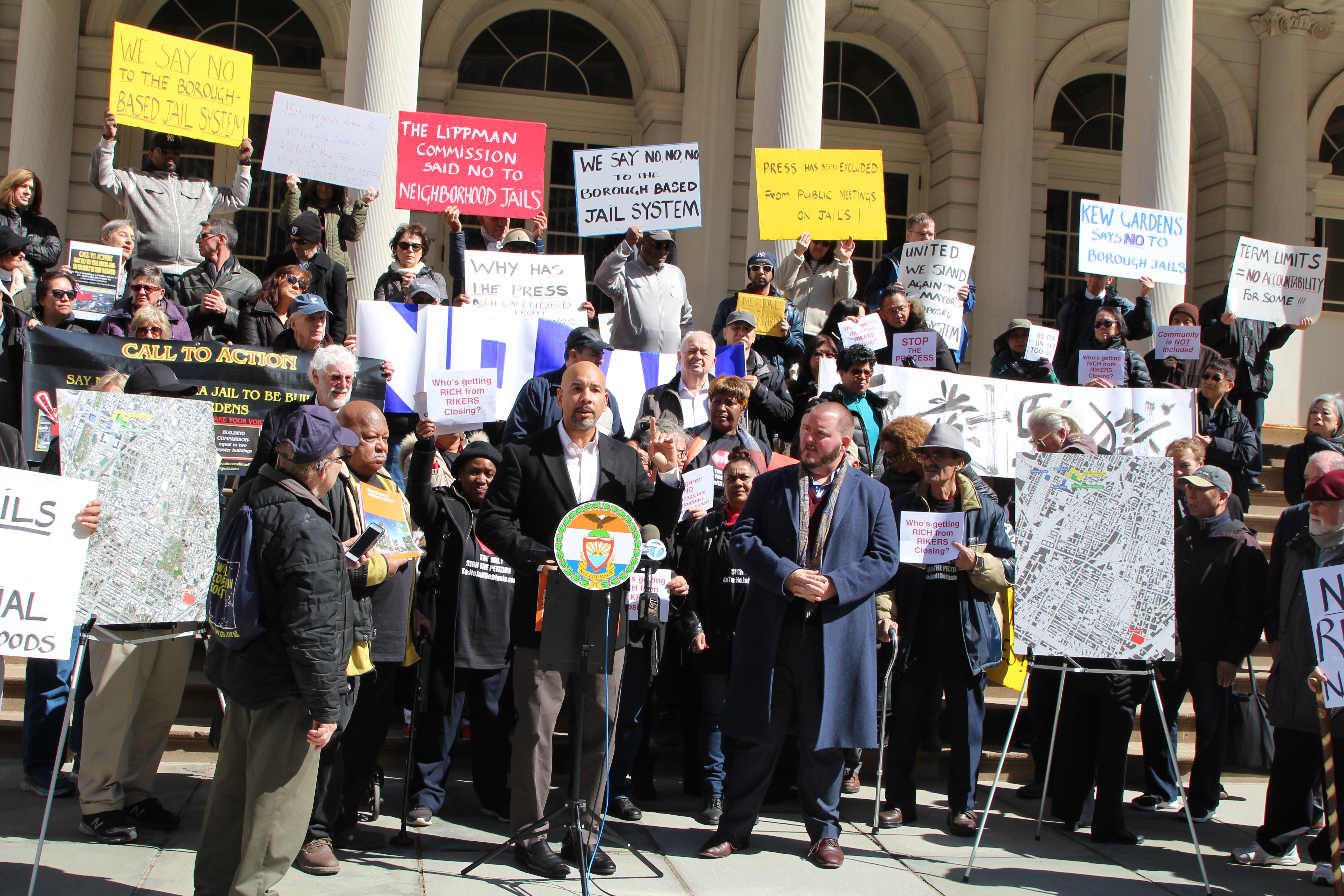 Bronx Borough President Ruben Diaz Jr. joined tenants of the Diego Beekman Houses and community leaders from across the city today for a rally on the steps of City Hall to oppose the siting of a new jail in the Mott Haven section of The Bronx.

During the rally, Borough President Diaz called on Mayor Bill de Blasio to stop the certification of the city’s Uniform Land Use Review Procedure (ULURP) for the proposed jail site at 320 Concord Avenue, which is scheduled to happen tomorrow. The site is currently operated as a tow yard, and is the former location of Lincoln Hospital, in the middle of a residential neighborhood in Mott Haven.

Borough President Diaz and those assembled at the event called on the mayor to select a better site for the jail, specifically the existing Bronx Family Court location and additional vacant space next to the Bronx Hall of Justice on East 161st Street.

“Rikers Island must be closed. However, we should not abandon the principles of criminal justice reform for reasons of political expediency,” said Bronx Borough President Ruben Diaz Jr. “Mott Haven is the wrong location for a new jail in The Bronx. Mayor de Blasio needs to stop the certification of this ULURP, listen to community concerns and select a better site—adjacent to our criminal court—for this jail.”

“We have been demanding the mayor and City Council change their unjust jail plan for the better part of a year, and we have not heard one word from them, nor seen any meaningful community engagement whatsoever,” said Diego Beekman Mutual Housing Association CEO Arline Parks. “The fact that the mayor would go ahead with siting a massive jail in a low-income community of color on a piece of land meant for community-based development is the final piece of proof that he doesn’t care about our community and people like us. The City clearly does not respect the rights of Mott Haven residents.”

“We all agree that Rikers’ Island should close, but we were expecting far better from this Administration. The proposed alternative location in Mott Haven was chosen without engaging with local residents, without meeting the stated goals for criminal justice reform in our city, and without considering alternative options. It is right in the middle of a residential neighborhood, too far from the local court, and has been controversial since first announced. We urge Mayor de Blasio to reconsider this decision before the certification of the city’s Uniform Land Use Review Procedure (ULURP) goes into effect tomorrow. Bronx residents and the community of Mott Haven deserve more,” said Congress Member José Serrano.

“It is unfair to bring this new jail to Mott Haven near our children’s schools and residents without consideration, for the community’s immediate needs, input, or adequate access to the same criminal justice services as was given to other proposed borough sites,” said New York State Assembly Member Carmen Arroyo.

“I stand by my belief that Rikers must be shut down, and I remain committed to working with my colleagues in government and residents of the Bronx to demand a fair and transparent process in selecting a potential site. In order to truly implement a community-based jail system, there must be a strong partnership between local residents, elected officials, and all relevant stakeholders. Any proposal should include comprehensive analysis and ample public involvement in order to meet the needs of the people of the Bronx,” said New York State Senator José M. Serrano.

“Mayor de Blasio’s plan to build a 26-floor jail at 320 Concord Ave is not the right way to support the Mott Haven community. The Diego Beekman Mutual Housing Association — in collaboration with community leaders — created an ambitious plan to revitalize the South Bronx by building hundreds of units of affordable housing at that very location,” said New York State Assembly Member Michael Blake. By prioritizing the construction of a prison instead of resources intended to uplift our neighborhoods, the Mayor is sending a wrong signal to our communities. We need to build schools not jails.”

“The Third Avenue Business Improvement District, Southern Boulevard Business Improvement District, and the small locally owned, largely immigrant businesses of the South Bronx are vehemently opposed to the proposed siting for the Bronx borough-based jail,” stated Michael Brady, Executive Director of the Third Avenue Business Improvement District, Southern Boulevard Business Improvement District, and Bruckner Boulevard Commercial Corridor. “Bill de Blasio’s borough-based jail plan is misguided to say the least and does not include input from community leaders and residents. The community has been vociferously opposed to the proposed siting of this jail and has been met with incentive tactics employed by the administration akin to pimping out our neighborhood for the purpose of a school, a park, and adequate roads and sewers. These elements are not community amenities they are community rights – especially in this neighborhood that has been overlooked and under resourced for generations. The de Blasio administration and other leaders can not dupe our neighborhood yet again – we will not settle for what should be guaranteed investments for the sake of creating a jail. This move underscores the continued classism and systemic racism met by Bronxites in the larger context of New York City’s development and highlights that the de Blasio administration does not implement criminal justice best practices – even practices that his departments and research support. This is not an action that creates America’s fairest city.”

The proposed location at 320 Concord Avenue was selected without community input, and has been controversial from the moment it was announced: The site is so far away from the borough’s criminal court that it goes against the recommendations of criminal justice experts, who almost universally believe that jails should be adjacent to court and other criminal justice services.

In fact the Lippman Commission’s report, which is being used as the ideological underpinning of Mayor de Blasio’s plan to close Rikers Island, specifically states that jails belong next to criminal courts for a wide variety of reasons.

“Locating modern jail facilities near the criminal courts and closer to families, attorneys, and health and service providers is a chance to create a more humane system for the decades to come,” said former Chief Judge of the State of New York Jonathan Lippman in the foreword to his commission’s own report.

“Even in the 1930’s, when no one cared about criminal justice reform and the system was used as an explicit measure to punish the incarcerated, they still knew that jails needed to be close to the courthouse. Back then, they built the Bronx House of Detention just a few blocks away from the courthouse on the site of what is now the Gateway Center Mall,” said Borough President Diaz. “How could an administration so supposedly committed to justice get this wrong in 2019, when they got it right by accident in 1937?”

Additionally, after years of community input and planning, the Mott Haven community and the leadership of the Diego Beekman Houses have put forward a plan to redevelop the tow yard site with a community-centered affordable housing and mixed-use development. The proposed jail would prevent that plan from going forward.

The Diego Beekman Neighborhood Development Plan can be viewed in full at http://bit.ly/2reo1b3. Maps of the proposed jail sites are available for download at https://flic.kr/s/aHsmBRbmet.

CAPTION: On Sunday, March 24, 2019, Bronx Borough President Ruben Diaz Jr. joined residents of the Diego Beekman Houses, community leaders and others at a rally on the steps of City Hall to oppose the siting of a new jail in the Mott Haven section of The Bronx. Borough President Diaz urged the administration to instead consider a better site adjacent to the Bronx Hall of Justice on East 161st Street. Download the photo at https://flic.kr/p/2dUN1sp.