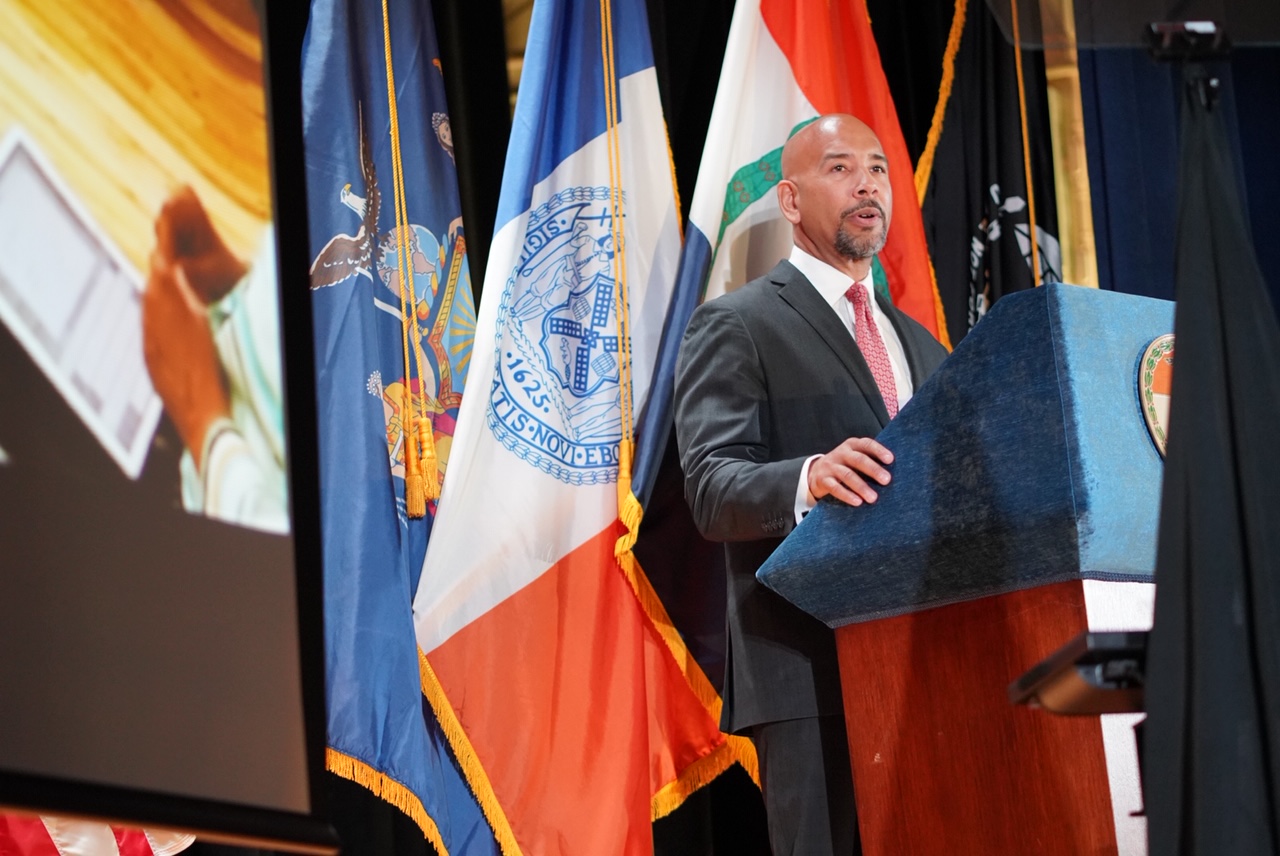 Today, Bronx Borough President Ruben Diaz Jr. announced the founding of “Camp Junior” at Harriman State Park during his annual “State of the Borough” address, his tenth since taking office in 2009.

This new camp was created in memory of Lesandro “Junior” Guzmán-Feliz, a 15-year-old who was murdered at the hands of gang members in June and galvanized the city, spawning the “Justice for Junior” campaign. “Camp Junior” will be administered by The Fresh Air Fund and has the full support of Lesandro’s parents, Leandra Feliz and Lisandro Guzman.

“Junior was everything we want our children to be. He was a good student and a member of the NYPD Explorers. He was kind to his parents and his neighbors. His candle was dimmed to soon, but he can be a shining light for generations. Starting this summer, we will give hundreds of Bronx kids a chance to learn by his example,” said Borough President Diaz during the speech.

“Camp Junior” has been created through a partnership between the borough president’s office, The Fresh Air Fund and the New York State Department of Parks. The program will take hundreds of Bronx kids upstate each summer to enjoy recreation and educational opportunities free of charge, and will include an anti-violence curriculum.

Borough President Diaz encouraged those who were touched by Junior’s story to donate to The Fresh Air Fund, who will administer “Camp Junior,” and help make the new program a success.

“When this tragedy struck, I heard from so many from across the nation who asked how they could help our community heal,” said Borough President Diaz. “The answer is simple: help Camp Junior succeed.”

To support “Camp Junior” donate online at www.crowdrise.com/campjunior, text JUNIOR to 41411 or call The Fresh Air Fund directly at 212-897-8900. Information on how to sign up for “Camp Junior” can be found at https://on.nyc.gov/2BKivCm.

Borough President Diaz discussed a wide variety of other issues during the speech, including the state of New York City Public Housing (NYCHA) as well as his #CleanUpNYCHA social media campaign, which uses social media to drive change at public housing developments. The borough president also announced new legislation, in partnership with Assembly Member Marcos Crespo and State Senator Zellnor Myrie, to give NYCHA tenants reductions in their rent when they go without basic services, in the same matter that a rent stabilized tenant in a private building would have.

“Many would say that the worst landlord in New York City is New York City,” said Borough President Diaz. “I agree.”

Borough President Diaz spoke of the City’s plans to build a new jail at the site of the tow pound in Mott Haven, reiterating his opposition to the plan and pointing out that a better site for the jail exists adjacent to the Bronx Hall of Justice at the family court building.

“Criminal justice reform experts say jails should be located next to court houses for myriad humane reasons in the interest of justice. Why not here?” said Borough President Diaz. “Nothing is set in stone. If they can make changes to their plans in Manhattan, why can’t they make changes in The Bronx?”

The borough president called for a wholesale review of the Third party Transfer program, which the de Blasio administration has proposed to expand as a vehicle for removing buildings from bad landlords.

“Bad landlords should be held accountable. However, the TPT program has been used to seize homes from minority homeowners in The Bronx and Brooklyn,” said Borough President Diaz. “We need a wholesale review of this program before we expand it.”

Borough President Diaz also called for expanded MWBE opportunities at the City’s pension funds, announcing that he would be introducing a resolution as a trustee on the New York City Employees Retirement System (NYCERS) board mandating that the board allocate double the percentage of its funds currently managed by MWBEs.

“My resolution requires that diversity increase until our fund managers better represent the diversity of our city,” said Borough President Diaz. “Women are 60 percent of NYC’s workforce, and minorities comprise approximately fifty-five percent. Together, we will level the playing field at our pension fund.”

On the upcoming Census, Borough President Diaz urged all New Yorkers to participate in order to preserve New York’s clout in Washington, D.C., in regards to funding and political representation. He also stated that he would not fill out any question on the Census that asked for his citizenship status, and encouraged those in attendance to follow his lead.

“I will not answer any question asking about my citizenship status, and I encourage my fellow citizens to do the same,” said Borough President Diaz. “Remember, we are a sanctuary city, and those principles will guide our participation in the Census.”

The borough president closed his speech by noting how his borough has met the challenges of the past decade, and calling for New York to follow the example set by The Bronx.

“The challenge of our time is to provide a chance and an equitable city while keeping New York’s soul – a collection of our hopes, love, and creative endeavors alive, well, and burning strong. For, all New Yorkers need is a chance, an opportunity, and equity to succeed,” said Borough President Diaz.

A full copy of the speech can be downloaded at https://on.nyc.gov/2Tc92xo.

Please note that your donation to The Fresh Air Fund will not grant you any special access to city business, to New York City officials including The Office of The Bronx Borough President, or any preferential treatment.