City Announces Bronx Point, a Waterfront Development That Will Create Open Space and Hundreds of Units of Affordable Housing in the South Bronx 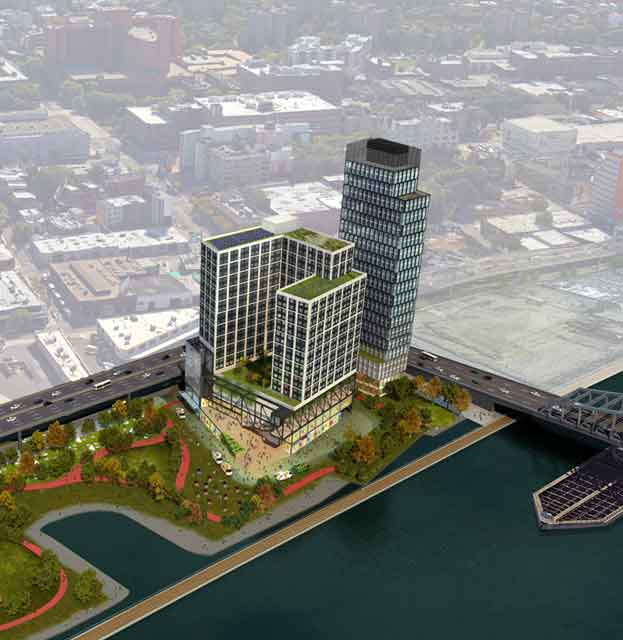 Bronx Point will also include a home for the Universal Hip-Hop Museum, a new waterfront esplanade, a state-of-the-art multiplex theater, a food hall and incubator and more

Bronx, NY – New York City Economic Development Corporation (NYCEDC), in partnership with the Departments of Housing Preservation and Development (HPD) and Parks and Recreation (DPR), today announced a plan to transform a long-vacant site located along the Harlem River waterfront into Bronx Point, a dynamic mixed-use development that will feature high-quality public open spaces, hundreds of permanently affordable housing units, a home for the Universal Hip-Hop Museum, a state-of-the-art multiplex theater, education space, and a neighborhood food and beverage hall and incubator.

The development of Bronx Point will activate one of the largest remaining City-owned parcels of land in the Bronx. Sitting at a gateway location in the Lower Concourse neighborhood, the site is a stone’s throw away from the transit-rich 149th Street corridor where Hostos College, the Bronx General Post Office, and Lincoln Hospital are located. The site is adjacent to Mill Pond Park and the 145th Street Bridge that connects to Upper Manhattan.

Bronx Point will include up to 1,045 units of housing and will be delivered in two phases. Phase one is anticipated to be completed in 2022 and will include approximately 600 units of permanently affordable housing that targets households with incomes ranging from extremely low to moderate. Half of the permanently affordable housing will consist of larger, two-and three-bedroom apartments. Phase one of the project will include:

Bronx Point is a response to a request for expressions of interest to redevelop the vacant site issued by NYCEDC in July 2016. The winning proposal was submitted by a joint venture partnership between L+M Development Partners and Type A Projects, a woman-owned emerging developer that is known for their dedication to building affordable educational spaces and state-of-the-art public schools in New York City.  The development team has over 60 years of experience combined.

The project is expected to create over 100 permanent jobs and approximately 915 direct construction jobs in phase one. The construction of the project will aim to reach the highest standards of environmental sustainability through the Enterprise Green Communities or LEED Gold Certification. The development team will take part in HireNYC, a NYCEDC program that connects the City’s workforce development services to various projects and will work closely with local partners to connect residents to new jobs in the development. Additionally, Bronx Point will work to meet or exceed a 35% M/WBE participation goal.

“Over the last two years, NYCEDC has worked with the South Bronx community to address the area’s most pressing needs: affordable housing and waterfront access. Today, we are excited to announce the activation of this long-vacant waterfront site with high-quality public open space, over 600 units of permanently affordable housing, and a range of cultural facilities that pay homage to the boogie down Bronx,” said NYCEDC President and CEO James Patchett. “This is a true community project, and we’re grateful to Speaker Mark-Viverito and Bronx Borough President Diaz for their leadership in getting us to this milestone. We look forward to continuing to work with our partners HPD and DPR, along with Community Board 4 and other local stakeholders to bring this transformational project to life.”

“The development of the Lower Concourse North site will strengthen the neighborhood by creating new and exciting community destinations and much needed affordable housing. An anticipated 600 apartments in the first phase will be affordable in perpetuity and will create affordable housing options for a wide range of income levels,” said HPD Commissioner Maria Torres-Springer. “I want to thank Speaker Melissa Mark-Viverito for her leadership and Borough President Diaz, Jr. and Community Board 4 for their dedication to making the Bronx stronger by supporting such important developments.”

“NYC Parks is committed to expanding waterfront access along the Harlem River and improving open space,” said NYC Parks Commissioner Mitchell J. Silver, FAICP. “The Lower Concourse North project will help achieve these goals by providing the community with new open space; it puts us closer to a more continuous waterfront esplanade, and presents an opportunity to address their requests to further vitalize the area with more amenities.”

“Bronx Point is a tremendous step forward for our borough. Not only will this project create much-needed affordable housing units, it will activate underutilized space, open up more waterfront to public access, create new public spaces and retail amenities for community use and, finally, bring the Universal Hip-Hop Museum to its rightful location in the birthplace of hip-hop, The Bronx. Hip-hop was born in The Bronx, and the inclusion of the Universal Hip-Hop Museum as part of this project will help showcase our role in the creation of that worldwide cultural movement for generations to come. I congratulate NYCEDC, HPD, the Parks Department, L+M Development Partners and Type A Projects on their tremendous collaboration. This innovative mixed-use development is a model for future projects across the nation, and I am proud to support it,” said Bronx Borough President Ruben Diaz Jr.

“The Lower Concourse North continues the remarkable renaissance and transformation of the South Bronx. The City’s nearly $200 million investment will vastly improve existing infrastructure, create jobs, affordable housing, new public open space, community facility space, programs and amenities to benefit the residents of this district. We look forward to working closely with EDC, the City and the development team in fulfilling the community’s vision for this very important and strategic site along the Harlem River,” said Paul A. Philps, District Manager, Community Board 4.

“We’re honored by the opportunity to develop this extraordinary site along the South Bronx waterfront,” said Josue Sanchez, Associate Director at L+M Development Partners. “Bronx Point will deliver hundreds of permanently affordable housing units while establishing a destination for residents from across the borough and beyond. From a state-of-the-art multiplex theater and top-notch educational programming, to a locally-driven food hall and the first-ever brick-and-mortar Hip Hop Museum, we believe this will be a project that South Bronx residents will be proud of for years to come. We’re excited to collaborate with Type A Projects and our longtime partner BronxWorks on an in-depth dialogue with community members and other local stakeholders about design, workforce development, open space and more as we work to deliver the best possible project.”

“We are incredibly excited to be part of this transformative development that will enhance the Harlem River waterfront in the South Bronx and function as a true community asset. Bronx Point’s dynamic mix of cultural, educational, and community facilities, anchored by hundreds of affordable housing units and world-class public open space, will fulfill Type A’s mission to create vibrant and affordable communities that underpin the diverse fabric of New York City,” said Annie Tirschwell, Principal, Type A Projects. “As a woman-owned business and emerging developer, we are grateful for NYCEDC’s committed support to level the playing field for M/WBE firms.  We look forward to working with this accomplished team and the community to create an innovative and affordable waterfront destination.”

“The Universal Hip Hop Museum may be the single most important project for the preservation of Hip Hop culture. This new cultural institution will be a great new tourism destination for NYC and the Bronx. What a great day for Hip-Hop! Our four years of hard team work has paid off. I thank God, as I am elated to know that this mecca devoted to the cultural phenomenon of Hip-Hop will preserve not only my legacy, but also the legacies of many others for the world to see,” said Kurtis Blow, Chairman of the Universal Hip-Hop Museum.

“BronxWorks is proud to be a key community partner on the BronxPoint project which will bring much-needed affordable housing, expanded open space, and new job opportunities to our community.  The development is a perfect location for us to continue our great work and further our mission to help individuals and families improve their economic and social well-being through effective workforce training and an array of essential services,” said Eileen Torres, Executive Director, BronxWorks. “We employ more than 800 staff across over 30 locations and serve 40,000 Bronx residents a year and our successful existing partnerships with L+M give us great confidence that we will be able to create at Bronx Point a lasting and positive legacy.  We also look forward to joining a roster of great community organizations at this exciting new development.”

“CityScience believes that science is best learned in connection to the communities in which we live.  Bronx Point’s location along the Harlem River, adjacent to the inlets of Mill Pond Park, presents a unique opportunity to further our mission to raise the quality of science education and support environmental stewardship in the Bronx and across the City.  We are extremely excited to be part of this project and look forward to this opportunity to continue our successful model with new brick and mortar location,” said Thor Snilsberg, Executive Director, CityScience.

“As a developer of one of NYC’s largest and newest food halls, the Dekalb Market Hall at City Point, I am particularly excited to be part of Bronx Point. Food Halls can be real drivers of meaningful economic development for small, local food businesses,” said Anna Castellani, Founder and Manger Founder & Managing Partner, Foragers Markets. “A project like this gives small vendors access to the public without the crippling cost of infrastructure investments and by joining forces under one roof, they also magnify their appeal and marketability. Bronx Point will be a great opportunity to engage the Bronx community with local and healthy fresh food in a communal dining space alongside Mill Pond Park and the Harlem River.”

“As an active member of the Bronx cultural, educational and artistic communities and soon to be a permanent resident of Mill Pond Park and the Harlem River Waterfront, we have always envisioned ourselves as a museum with and without walls even after we open our building on the north end of the park. We see this initiative as an opportunity to continue extending our reach even further and look forward to exploring creating a public, local artist-designed playground with the development team as well as other Museum program opportunities to enhance the park and waterfront experience for thousands of museum visitors and neighbors,” said Carla Precht, Executive Director, Bronx Children’s Museum.

The project is a key component of a $194 million capital investment strategy announced by Mayor de Blasio in 2015 and led by NYCEDC. In developing priorities for this unprecedented capital investment, NYCEDC engaged the local community in interactive workshops and visioning sessions to prioritize the area’s needs. The two-year process informed a number of critical projects, such as upgrading infrastructure and creating new waterfront open space to facilitate affordable housing development.

The $194M investment strategy includes the acquisition of land for the creation of a brand new 2.3-acre park on the Harlem River waterfront at E. 144th Street, blocks south of the Bronx Point project site; investments in sewers; complete redesign of large high-traffic intersections and significant streetscape improvements along Exterior Street, including new lighting and sidewalks; expansion of high-speed broadband to attract businesses. These capital projects are now underway and slated for completion in the next few years.

Development of the Lower Concourse North site is currently undergoing the public land use review process and has received positive approvals from Community Board 4, Bronx Borough President Reuben Diaz, and the City Planning Commission.