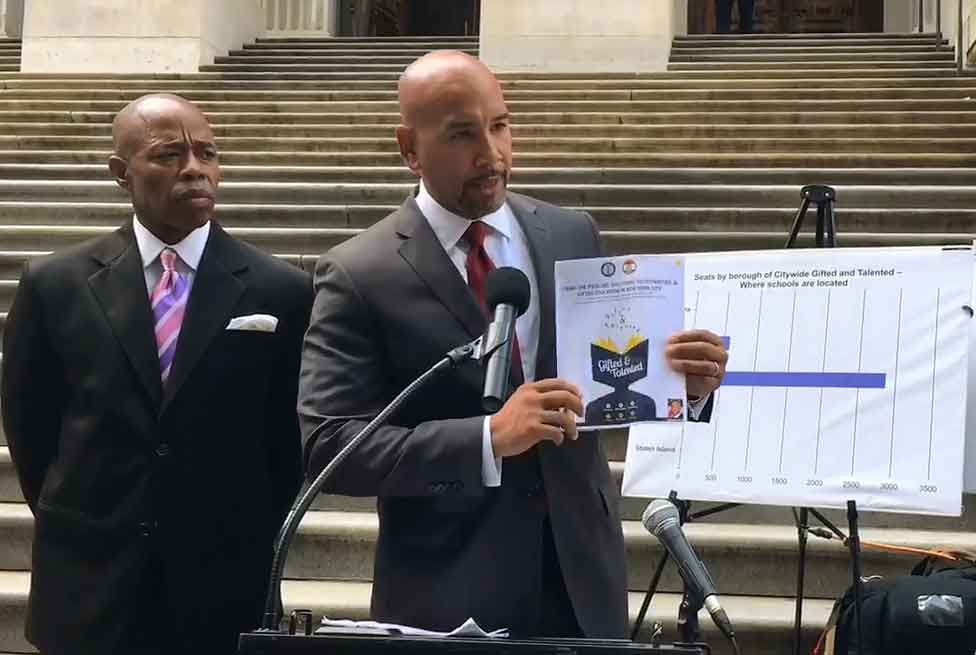 The report, which is the work of the borough president’s joint “Gifted and Talented Education and Specialized High Schools Task Force,” was released in front of the Tweed Courthouse in lower Manhattan, home of the New York City Department of Education.

Top recommendations in the report included requiring that all communities have equal access to gifted and talented programs in kindergarten, that all students in public pre-K programs must be tested for gifted and talented programs, that Citywide and other middle school gifted classed must be expanded across the city, that test prep programs must be further expanded for the specialized high schools, and that a single test should not be the only source of admission to the city’s specialized high schools, among others.

The report can be viewed at http://on.nyc.gov/2sQkL84.

“Today, we are giving the Department of Education a little ‘summer reading’ of their own, a report outlining what we believe are necessary changes the city could make today to bring more equity to programs for gifted learners in the five boroughs,” said Bronx Borough President Ruben Diaz Jr. “We cannot send our children to Stuyvesant, Bronx Science and Brooklyn Tech if they are not prepared. And we cannot expect them to be prepared if they do not have the same advantages that are offered to other communities.”

“When it comes to gifted and talented education in New York City, the math does not add up. Our analysis clearly shows a historical inequity in delivering high-quality educational opportunities to students across the five boroughs,” said Brooklyn Borough President Eric Adams “Access to G&T programs and specialized high schools can no longer be allowed to be dictated by one’s zip code; parents who live in Belmont and Brownsville should expect the same grade-A programming and enrichment as parents in Tribeca. We don’t need small changes, we need bold changes.”

The task force, which is comprised of government officials, community members and parents who are familiar with the issues gifted students face in New York City schools, hosted several public hearings earlier this year to discuss issues surrounding gifted and talented education in New York City public schools. Those hearings, as well as other work, informed the contents of this report.