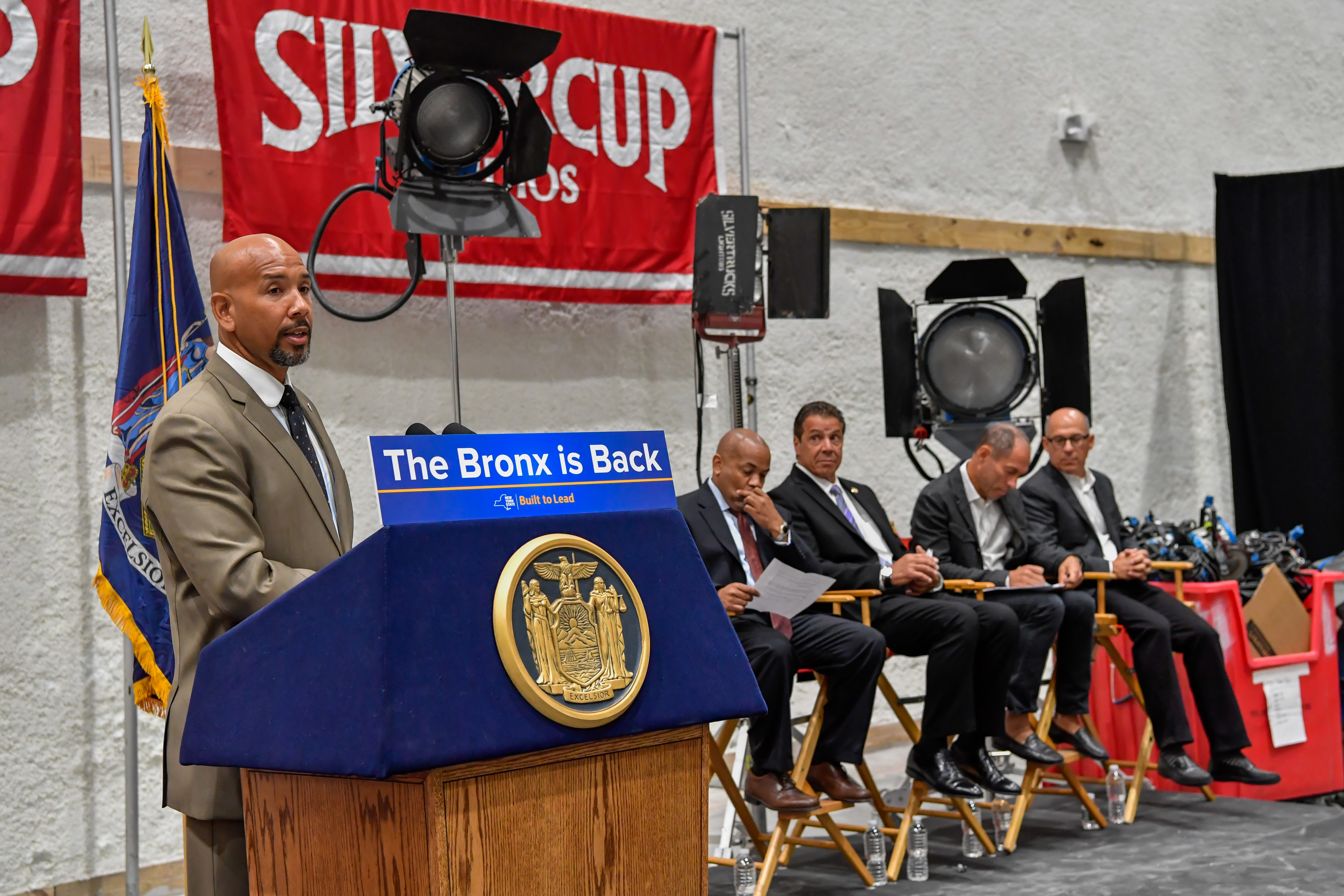 Governor Andrew M. Cuomo today announced the completion of Silvercup North, a new film and television production facility in the South Bronx. Silvercup Studios, one of the leading independent, full-service film and television studios in the Northeast, built the $35 million studio complex to help meet the growing needs of New York’s booming film and television industry. The new facility – Silvercup’s third New York studio – and the productions that will occupy it will create an estimated 400 well-paying production-industry jobs, as well as generate local revenue through the purchase of materials and other goods and services. Silvercup was awarded a $1.6 million performance-based grant through the New York City Regional Economic Development Council to assist with the construction, renovations and purchase of machinery and equipment for the new facility. The project created approximately 100 construction jobs.

“Silvercup Studios is a great New York success story, whose growth and strength parallels everything going on in the Bronx right now,” Governor Cuomo said. “This expansion will help create hundreds of good-paying jobs, generating millions of dollars to local businesses and further build upon New York’s booming film industry. This exciting project is yet one more reason why the Bronx is back.”

Assembly Speaker Carl Heastie said, “The Assembly Majority has vigorously supported the New York State Film Tax Credit – which now stands at $420 million annually – because when the highly mobile television and film industry takes root in our State, jobs and economic opportunity follow. The expansion of Silvercup Studios into the Bronx reflects their continued commitment to doing business in our State, while bringing jobs to where they are badly needed. Many of the studio’s past productions have become part of the American story, and with today’s announcement the people of the Bronx will have a role in telling it.”

In addition to providing production facilities, Silvercup North features a fully-equipped on-site lighting and grip department, as well as a lumber yard with paint, hardware and other set building supplies; a full complement of shops, offices and other support spaces to enhance film and television production will also be included on-site.

CEO of Silvercup Studios Alan Suna said, “We are excited to open Silvercup North. With four studios and 50-foot ceilings, we’ll be able accommodate more and different productions than ever before, including ‘Time After Time,’ our first at the new facility. The film and television industry is booming in New York like never before thanks to the New York Empire State Film and Television Tax Credit Program. It is extremely gratifying to be opening our third studio.”

President of Silvercup Studios Stuart Suna said, “Port Morris is the perfect location for our newest studio. With easy access to transportation, and the many offerings in this burgeoning neighborhood, as well as the incredible support from the State, the City and the Bronx, we expect Silvercup North to be a big success for us, the productions we support, and the local community.”

Owned and operated by brothers Stuart and Alan Suna, Silvercup Studios opened in 1983 in what was the former landmark Silvercup Bakery, in Long Island City. The studio quickly established itself as one of the largest independent, full-service film and television production facilities in the northeastern United States and has hosted many big-name film, television and music video productions over the years. Today, Silvercup Studios has three locations in New York – two in Long Island City and the new location in the Port Morris section of the Bronx – with a total of 23 studios. With the expansion to its third facility, Silvercup now operates more than 500,000 square-feet of studio space in New York.

Speaker Melissa Mark-Viverito said, “Silvercup Studios is a household name, and its new Bronx facility will create hundreds of jobs and millions of dollars in revenue for our City. From investing in job training opportunities with industry professionals to providing underrepresented New Yorkers with professional filmmaking experience, the City Council is proud to do its part to help create and support good paying, local jobs for New Yorkers. I thank Governor Cuomo for his partnership as we work to support the film and television industry and am proud to join Silvercup Studios and my colleagues in government as we celebrate another important milestone in the Empire State.”

Bronx Borough President Ruben Diaz Jr. said, “This is a historic day for The Bronx, as we welcome Silvercup Studios to their new Bronx home and welcome our borough’s first new film studio in decades. Silvercup’s expansion to The Bronx is a key component of our borough’s ongoing renaissance, and will create new jobs and new career opportunities for Bronx residents. Great things are happening in this borough, and I want to thank Governor Andrew Cuomo, the Suna family, Empire State Development, the Bronx Overall Economic Development Corporation and everyone who helped create the atmosphere and opportunites that made this expansion possible.”

Senator Jose Serrano said, “As we have seen time and time again the cultural sector acts as an economic engine for communities throughout New York. With today’s announcement, the new Silvercup Studios location in the Bronx will help contribute millions of dollars to the local economy while creating hundreds of good-paying jobs for New Yorkers. Not only will this new location generate economic benefits, it will provide another resource to create artistic work, and contribute to the already thriving film industry. Many thanks to Governor Cuomo for his continued leadership in expanding the cultural sector. ”

Assemblymember Carmen Arroyo said, “The film and television industry in New York is flourishing, and the new Silvercup production facility reflects Governor Cuomo’s unparalleled support for economic development in the Empire State. Under Governor Cuomo’s leadership, new businesses are moving to New York, current businesses are expanding their operations, and there are more economic opportunities than ever before. This new production facility will bring new jobs and revenue to the Bronx and showcase the ingenuity and prosperity of our booming film hub.”

Empire State Development President, CEO & Commissioner Howard Zemsky said, “The film and television industry is a key component of New York State’s economic development strategy that injects billions of dollars into the economy and creates thousands of industry jobs for New Yorkers. Under the leadership of Governor Cuomo, New York has become the premiere destination for filming, and Silvercup Studios’ expansion to the Bronx further supports the industry’s staggering growth as this iconic production studio continues to attract more films and televisions shows to the Empire State.”

Fisher Brothers Partner and Co-chair of the New York City REDC, Winston Fisher said,“Thanks to the leadership of Governor Cuomo, New York has become one of the finest and most coveted locations for film and television. The industry has greatly contributed to the state’s economy, and the completion of Silvercup North will continue to sustain that growth. This studio is a major win for the Bronx, as it grows the local economy and provides employment to hundreds of New Yorkers. The Governor has made certain that this industry thrives in the Empire State for years to come, and the NYCREDC is proud to be a part of its continued success.”

New York State’s Film Tax Credit program has been identified by a number of major film productions and television series as a deciding factor when choosing to film in the Empire State. Since 2006, 912 film and television projects have hired more than one million new employees while generating over $20 billion in new spending and economic activity throughout the state. In 2015 alone, a record 203 film and television projects applied for the program, estimated to generate 187,764 new hires and $3.05 billion in new spending statewide. This year, 119 new projects have already applied and are participating in the program, hiring nearly 150,000 new employees through the first eight months of 2016.

About Silvercup Studios:
With its iconic sign visible from the East River, Silvercup Studios has been home to famed television productions including HBO’s Sex and the City and The Sopranos, 30 Rock, and Gossip Girl. Current productions at Silvercup’s facilities include Quantico, Girls, Elementary, Madam Secretary,Younger, Friends from College, Z and Time After Time. Silvercup has also hosted dozens of major motion pictures, including When Harry Met Sally and The Devil Wears Prada, and hundreds of commercials.