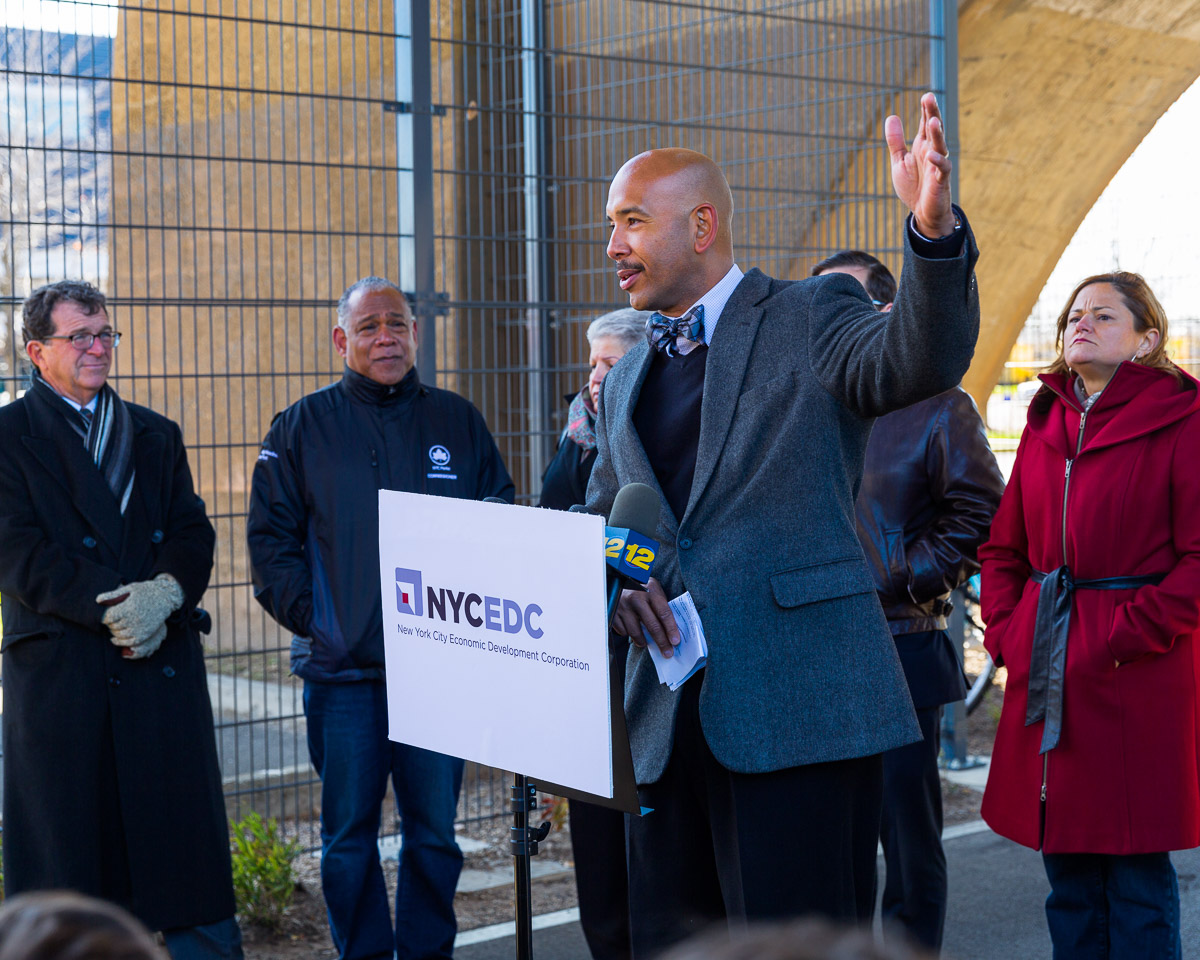 Connector Will Provide Critical Transportation Link for Pedestrians and Bicyclists Between the South Bronx and Randall’s Island, Providing Access to 330 Acres of Open Space

“The South Bronx and Randall’s Island are just hundreds of feet apart. With this new path, we finally bring them together with a safe, convenient connect,” said Mayor de Blasio. “This new path will link children and families in the Bronx to ball fields and open spaces where they can run, bike and play. Just like the revitalized High Bridge, this connector to Randall’s Island is going to open up new opportunities these communities need and deserve.”

“The Randall’s Island Connector has been many years in the making, and thanks to the partnership and support of our elected, City, State and community partners, I am thrilled that we are opening this critical link between the South Bronx and Randall’s Island,” said NYCEDC President Maria Torres-Springer. “By providing direct pedestrian and bicycle access to Randall’s Island, we are making it easier for Bronx residents to enjoy the recreational opportunities it offers, improving quality of life in the neighborhood and exemplifying our commitment to building strong and equitable communities across all five boroughs.”

“The opening of the Randall’s Island Connector supports our goals to increase New Yorkers equitable access to greenspaces across the boroughs,” said NYC Parks Commissioner Mitchell J. Silver, FAICP. “The connector opens up a whole new opportunity for Bronx residents who have never stepped foot on the Island. And now, by taking a stroll over this connector, they have access to an amazing greenspace that has seen tremendous transformation in recent years, and houses numerous resources for New Yorkers.”

“For more than a decade, the Randall’s Island Park Alliance has been working to build bicycle and pedestrian pathways along nearly nine miles of the Island’s parkland and shoreline,” said Aimee Boden, President of the Randall’s Island Park Alliance. “The new Connector leads directly into this Island-wide pathway system, and we could not be more excited to help open such increased and improved access to the Park’s fields, facilities and natural areas for neighbors in the South Bronx.”

The Connector provides the only at-grade, Americans with Disabilities Act compliant access between Randall’s Island and the South Bronx. Current access requires traversing ramps and stairwells along the Triborough Bridge. The Connector project included the construction of the quarter-mile pedestrian and bicycle pathway, lighting, fencing, landscaping, and sustainable stormwater basins. Additionally, the project included adding decking and railings for the existing utility bridge to be used safely as a pedestrian bridge. This dual-purpose bridge, constructed in 2009 as part of Con Edison’s electric expansion project from the Bronx to Randall’s Island, is the result of a partnership between Con Edison and the City.

“This is great news for our community, which has been working together to improve access to quality green spaces for many years,” said Congress Member José E. Serrano. “The Randall’s Island Connector will open up a whole new world of opportunities and green space for Bronxites to enjoy by making more accessible an area that has been effectively shut to us for decades. As someone who grew up seeing Randall’s Island as a needlessly difficult destination for Bronxites, and someone who has worked for years to secure federal funding for this project as a member of the House Appropriations Committee, it is incredibly gratifying to see this project finally become a reality. Our healthier lifestyles begin with access to quality outdoor space, and the Randall’s Island Connector is an important step.”

“The Randall’s Island Connector will serve as a critical transportation link between South Bronx residents and the wide array of attractions Randall’s Island has to offer – including 330 acres of open space, sports fields, picnic areas and more,” said New York City Council Speaker Melissa Mark-Viverito. “This project is an example of exactly the kind of smart, commonsense, and creative investment that we need in the South Bronx, generating much-needed access and opportunities for the local community. I staunchly advocated for the timely completion of the Randall’s Island Connector for the past decade, investing $110,000 into its development, and am proud to see this project some into fruition today. I thank NYCEDC, Council Member Maria del Carmen Arroyo, and all the community advocates and stakeholders who made this day possible.”

“This long awaited project will open up a safe, direct way for Bronxites to access Randall’s Island,” said Bronx Borough President Ruben Diaz Jr. “I am proud to have supported its construction, and I encourage all Bronxites, and visitors from all over the city as well, to take a trip to explore this tremendous new amenity. It’s never been easier to explore Randall’s Island from the Bronx.”

“I am thrilled that the Randall’s Island Connector is finally opening to the public,” said Congress Member Carolyn B. Maloney. “By providing residents with an easy route for walking and biking, NYCEDC, the Parks and Recreation Department, NYC DOT, and the Randall’s Island Park Alliance have given thousands of individuals access to the beautiful sports facilities, restored wetlands, gardens, picnic areas, and waterfront pathways on Randall’s Island. I want to thank everyone who worked so hard to make this project a reality, and encourage all those in the area to make use of this wonderful resource.”

“Our community has anxiously awaited the completion of the Randall’s Island Connector project,” said Council Member Maria del Carmen Arroyo. “It is a great transportation resource for our community and gives us cause for celebration. I want to congratulate all who dedicated themselves to seeing the project through. Well done!”

“South Bronx residents have long needed access to parks and open space,” said New York Secretary of State Cesar A. Perales. “The Department of State is proud to fund part of the development of the Randall’s Island Connector project. The completion of this pathway provides a critical transportation link allowing pedestrians and bicyclists to easily access 330 acres of recreational resources at Randall’s Island Park, helping ensure a better quality of life for South Bronx residents.”

“This opening of the Connector today demonstrates how cooperative efforts between the private sector and government can lead to good things,” said Harlem River Yard Ventures Senior Vice President Tony Riccio. “This is truly a celebration of good will and hard work. And in the end the benefit of this project will live on and mark its place in New York City’s History.”

“Con Edison is proud to have been a partner in developing the Bronx Kill crossing to Randall’s Island,” said Con Edison Senior Vice President for Elective Operations Robert Schimmenti. “The crossing increases electric power to the Island, is a significant improvement to the waterfront, and is a new greenway from the South Bronx community to more than 330 acres of recreational amenities on the Island. This is an exciting achievement for us all.”

“During the community planning process, Randall’s Island Connector emerged as one of the first priority projects specifically because it offers easy access to diverse recreational opportunities not available elsewhere in the neighborhoods of the South Bronx,” says Mathews Nielsen Landscape Architects Principal Signe Nielsen, RLA, FASLA.

“We applaud NYCEDC, NYC Department of Parks & Recreation and NYC Department of Transportation for bringing the Connector to life, successfully linking neighborhoods starved for open space with the amenities on Randall’s Island,” said New York Restoration Project Executive Director Deborah Marton. “The opening of this pathway marks a new chapter for the borough, one that celebrates accessible open space and actively fosters healthier communities. NYRP looks forward to collaborating with the City to continue to enliven the landscape of the South Bronx.”